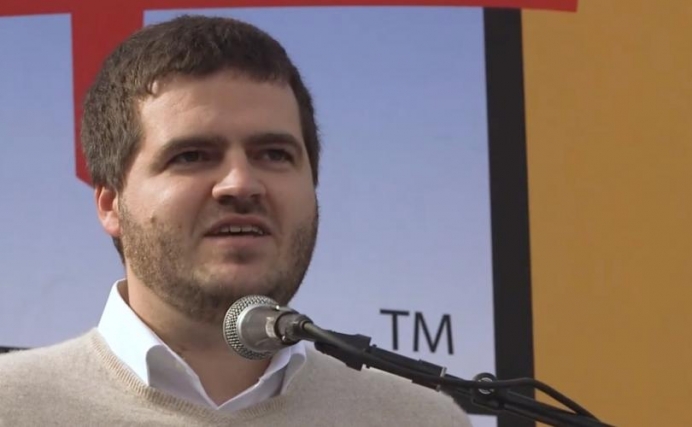 Man conceived in rape: You’re not pro-life if you’d make ‘exception’ to kill people like me

(LifeSiteNews) Thirty years ago, during her junior year in college, Kathy Folan was raped by an acquaintance, but her story ––and that of the son who was created that night and whom she gave up for adoption–– is a powerful, riveting tale of God’s grace.

“I was so filled with shame, I didn’t tell a soul,” and tried to forget about it, Folan told the crowd gathered for the Walk for Life West Coast in San Francisco on Jan. 25.

A month later, she began experiencing nausea and slowly began to realize she might be pregnant from being raped.  A pregnancy test confirmed what she suspected.

The three minutes that I sat on the edge of my bathtub waiting for the results were some of the longest minutes of my life.  If it were positive, my nearly perfect, all-American, well-planned life would be over.

During those minutes, Folan wondered what her parents, friends, and professors would think, and even questioned if anyone would ever want to marry her.

As I turned the stick over, I saw the two lines which meant my fear had come true. I was in a state of shock and panic, yet in that same moment, I recognized the intrinsic dignity of this newly created human being that God entrusted to me.  Knowing how I would disappoint my parents, it took me eleven days of daily calls to finally tell them.

Tweet This: "I was in a state of shock and panic, yet .. I recognized the intrinsic dignity of this newly created human being that God entrusted to me"

In the end, despite her trepidation, Folan’s parents responded with love and support, and so did others.

Folan then began a search for a family to adopt her unborn child, and was introduced to a Maryland couple, Barry and Liz Sullivan, who flew to Folan’s hometown, Spokane, Washington to meet her.

We all immediately ‘clicked,’ as though we had known each other forever.  This was the beginning of many miracles, little providential graces, that accompanied my decision to choose life.

Folan illustrated God’s grace, recounting how although the Sullivans were in Maryland, and she was in Spokane, “we were independently inspired to name the baby Nathan, which means ‘a gift from God.’”

I also knew that I was meant to be the vessel that brought him into this world, and they were meant to be his parents.

She also noted the grace that came at the moment of Nathan’s birth, after having begun to waver in her decision to give him up for adoption.  Both Folan and her parents, who had grown sorrowful at the pending departure of their grandchild, were surprised with an overwhelming sense of peace with her decision, which she attributes as a gift of the Holy Spirit.

Nathan was with Folan for the first six days of his life, and on day four, he was baptized into the Catholic faith with all three parents ––Kathy Folan and Barry and Liz Sullivan–– present.

Folan offered two more examples of God’s grace which flowed from her decision to choose life ––choosing adoption–– for her Nathan.

I went back to college less than two months after his birth and I visited the Sullivan family when Nathan was ten months old.  Seeing him with a family I could not provide, I knew then with 100% certainty that I had made the right decision for him.

Two weeks after I returned from that trip, completely at peace with my decision, I met the man of my dreams who is now my husband of almost twenty five years.

He fell in love with me the instant he heard my story.  He chose life.

Folan spoke lovingly and with great admiration for the man Nathan has grown up to be:

Barry once said that the reason our story turned out so beautifully is that our trust in God and what has been best for Nathan was at the core of our relationship.

Nathan has an incredible resume, including Eagle Scout and National Merit Scholar.  He inspired our boys to join the Boy Scouts, so they could be just like their older brother.  And now he is a successful businessman.

While his CV is impressive, what is most important is the love he has for all who meet him.

His faith is most important in his life, and he is a selfless, strong, great Catholic man, and he too fights for choosing life.

His is definitely a life worth living, as is every life.

His birth mom thinks Nathan’s existence challenges the popular notion that rape should be an exception to abortion restrictions.

Giving birth to Nathan did not destroy my life, as the abortion side would like you to think is the only [possible] outcome, but [instead] gave reason to a painful experience.  He is the beauty that came out of a very dark place.

Tweet This: "Giving birth to Nathan did not destroy my life, as the abortion side would like you to think .."

Nathan: When you say rape exception, you’re talking about me

To the delight of the crowd, when Folan completed her remarks, her son Nathan walked out from the wings and joined her on stage.

Often when you hear the pro-life/pro-abortion debate, what is disheartening is that even some of those who identify as pro-life make a little exception.

You’ve heard it before … “I am pro-life except, except in cases of rape.”

I want everyone to realize ––especially the ‘excepters’–– that you’re talking about me, and everyone like me.

Tweet This: "I want everyone to realize ––especially the ‘excepters’–– that you’re talking about me, and everyone like me"

How I was conceived, doesn’t define who I am.  What has formed me is the courageous choice of my birth mother and my adoptive parents:  They chose adoption, she chose life.  And every blessing I’ve had flows from this choice.

Tweet This: "How I was conceived, doesn’t define who I am. What has formed me is the courageous choice of my birth mother and my adoptive parents"

We are called to build the pro-life generation by living pro-life lives, and to witness to those around us so that they can see it and live it as well.  We must not leave a legacy of endings, but rather a legacy of beginnings and hope.

Editor's note: This article was first published at LifeSiteNews.com and is reprinted here with permission.