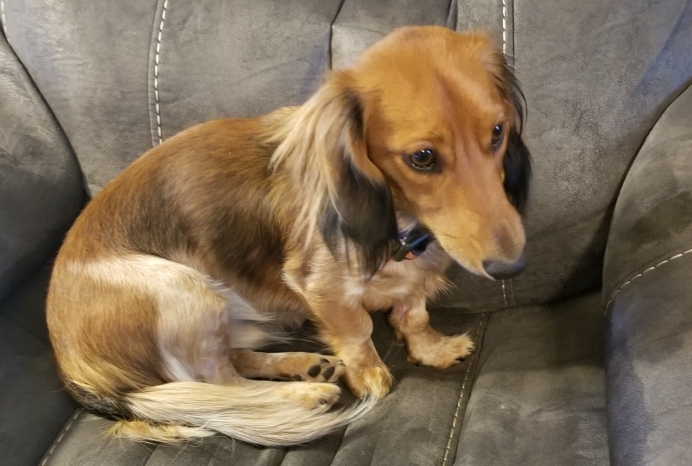 Learning "Life" from a Dog

This time last year, the lovely Mrs. Walden talked me into a dog for our boys (and for her, and everyone else, for that matter), so just after Christmas we brought home a newborn little Dachshund. His name is “Aubie,” and with all his quirkiness, I still like the fella.

An earlier column regarding Aubie noted that when he saw a stranger, or someone he had not seen in a long time, his response was to wag his tail like a crazy dog, then lose control of his bladder. Our paper towel bill went through the roof.

Aubie is now more than a year old. This is still the case.

At times, this dog drives me nuts. For instance, he stares at me while I eat, never blinking. This is unnerving. But no, I don’t give him food.

Okay, I give him food. Let’s move on to the point of this column and quit obsessing over details.

The point is, he drives me nuts.

Tweet This: We pour out our hearts so a small person can get the opportunity to live this crazy thing called life. @KirkWalden #prolife

But last week, Jenn and I flew to Brookings, South Dakota for an event with our friends at Option 1. We don’t get to travel to banquets together often, but because this was after Thanksgiving and during a time when I’m normally home, we bought the extra ticket and made it an adventure.

We dropped Aubie at his doggie hotel for the two-day trip.

When we picked him up however, something wasn’t quite right. He didn’t seem interested in any scraps from my breakfast. He wasn’t eating much at all, in fact. By the end of the week, other symptoms emerged.

Saturday night, we knew something was seriously wrong and rushed him to a veterinary emergency room. Apparently, we made it just in time. Aubie was dying.

Immediately they hooked up our little guy to an IV, began pumping fluids into him, ran tests and found out what was happening. Usually, a dog doesn’t make it through the malady he faced. But Aubie is young and slowly, began to recover. A little.

Monday, Aubie was released from the ER but our local veterinarian checked him out and said Aubie needed to go to the “hospital” in Nashville. I had no idea there were such things, but off he went.

Since then, more improvement. On Tuesday, he began “eating like a champ” for the first time. The brutal symptoms he experienced were not resurfacing. On Tuesday night, they removed his IV and his catheter. I’m not kidding. My dog had a catheter.

You may be asking, “How much did this cost?” I will never reveal this number to anyone, ever.

You will be pleased to know however, that somewhere in this odyssey we had the presence of mind to say, “We have limited funds and have to make rational decisions.” Though we said this too late, at least we said it.

Thankfully, our veterinarian agrees we should not be more aggressive in pursuing treatment options. We will bring him home, watch him closely and hope for the best.

At this moment then, Aubie is on the mend. No, he’s not out of the woods. But he is better.

Friends, I am not an “pet person.” I like them, but I’m not enamored with having a pet. I don’t need a pet to be joyful. My life is just fine with or without an animal waiting for me when I walk in the door.

But for some reason, when this little dog got sick, money wasn’t the first thought on my mind. All I wanted was for this little guy to get better and have a chance to live life a little (or a lot) more.

And it reminded me of what we do each day. At our ministries, we serve people.  We pour our hearts out so a small person—totally dependent on someone else—gains an opportunity to live this crazy thing called life.

Some lives will have extraordinary challenges. But every life is worth any effort needed to give that little someone a chance.

Aubie is a good dog. Precious? Sure. Worthy of value? Absolutely.

But the life of a person? Oh my. The value of one person’s life is beyond measure. And the joy we have when we know we’ve played a role in giving someone life? There’s no way to put a number on what we are honored enough to do.

Should little Aubie live a long life, he will never understand what Jennifer and others did to save him. In the same way, many we are honored enough to serve may never think to say, “thank you” for our efforts. But that’s okay. We didn’t sign up for this to receive thank-you cards, parades or other recognition.

By the time I send this column to print, Aubie will likely be home. If he pees on the floor when I welcome him back, that will be enough for me.