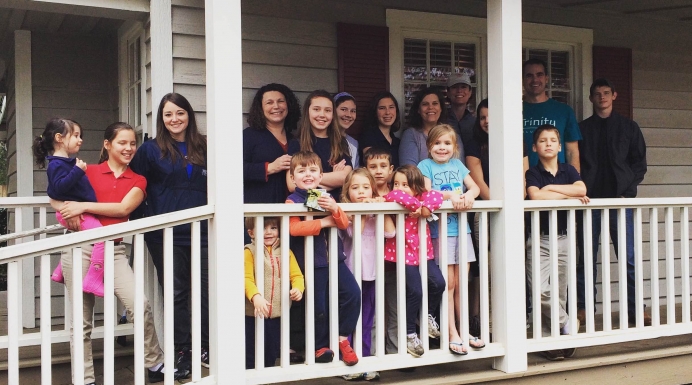 A group from a local church on the porch at Newton PRC just before the grand opening Photo Courtesy: Newton PRC

"It's a miracle all the way around": Pregnancy Center Cuts Ribbon on New Georgia Venture

There’s a reason the sign welcoming clients to the newly opened Newton Pregnancy Resource Center in Covington, Ga., features a heart inside a home.

“That is our goal,” client services coordinator Kayla Merritt said. “We want women to feel at home here. With love and compassion being our No. 1 motivation, we want nothing more than to create a space for a woman to feel heard, accepted and cared for.”

Offering free pregnancy tests, options counseling, resources, material supplies from its baby boutique, and referrals to free ultrasounds and other community services, the center opened for the first time Aug. 3 under the direction of Dara Lynn Rieger.

Since celebrating its opening, Newton PRC has relied primarily on word of mouth to reach clients with its life-affirming mission in a community located 35 miles east of Atlanta.

This new center grew from the vision of three area women: Leigh Ann Harris, Wanda Jenovese, and Jackie Hardy. Though there isn’t an abortion provider nearby, Newton County does rank No. 14 out of 159 Georgia counties in terms of annual abortions, even though it’s the 23rd-largest county in the state.

With training from Donna Perry of Life Resources of Georgia, Harris, Jenovese, and Hardy set about establishing a steering committee, which selected a board of directors in January 2015, choosing Dr. Cody McNutt, senior pastor of First Baptist Church, Covington as the first chairman of the board.

“The steering committee had been advised to select people from various vocations to serve on the board,” McNutt said. “Our first board consisted of several health care professionals, two pastors, and others who had experience with other pregnancy resource centers.”

Major funding first came in when Hardy’s work with the Georgia Baptist Missions Board gave her the opportunity to designate a recipient for one of their charitable grants. She chose Newton Pregnancy Resource Center.

Filling the position of executive director for that center became one of the new board’s first tasks. One board member who had supported Rieger during her five-year ministry with Campus Crusade for Christ—now known as Cru—recommended her as a candidate.

“The timing of that was very interesting to me,” Rieger said. “Ten years ago I was praying that the Lord would give me an opening for this kind of work. I was doing ministry, getting married, having children, but still–underneath all that—having this desire to get into pro-life work and ministry.”

“A year and a half ago, that burden on my heart got really heavy,” Rieger said. “Then that summer of 2015 all the Planned Parenthood videos came out. I was really grieved; for four to six months, I felt this malaise of grief.”

When she heard a new pregnancy center was forming in Newton County, Rieger contacted the board member she knew to find out how she could volunteer.

“Before I knew it, I was interviewing for a job,” she said.

Taking into account her commitment to raising her two young children, the board hired Rieger to work part-time as executive director starting in August 2015.

“In my mind, I thought it was going to be holding babies and encouraging mamas,” Rieger said. Instead she found herself working at her computer, speaking before groups, and raising support—a throwback to her Campus Crusade days. “And that’s okay,” she said.

In May 2016, the board hired Kayla Merritt to serve as client services coordinator. Merritt brought her experience working with trafficked women and her graduate studies in clinical mental health counseling to her work at Newton PRC.

“Serving clients is what I most like to do, and being able to work with volunteers to coordinate the best services and quality of care is my heartbeat,” Merritt said. “In my current role at Newton PRC, I get to work with both clients and volunteers to help them be their best and most equipped selves. Who wouldn’t want to do that?”

With Merritt training the first four volunteers, and funding coming in, Rieger and her board scouted for a building located near the hospitals, doctor’s offices, and other services their clients would need.

“It’s a residential area that's turning into a medical community,” Rieger said. “There's a number of family practitioners; there's an ob-gyn one street over from us; the hospital is two blocks down; and the birthing center is on our street, just a couple blocks away. We’re within walking distance of the health department. We are in the perfect location for women to come here.”

Though the center had some private donors ready to pay for a building, the first offer they made on a Gordy Street property was rejected. Within two weeks, Rieger learned of a former ob-gyn office that was available to rent just a few doors down. The owner, a Christian and a board member for another pregnancy center, “was really gracious and willing to rent it for a reasonable monthly rate,” Rieger said.

The donors agreed to pay the rent, and Newton Pregnancy Resource Center had a home at last.

“It was just a miracle all the way around,” Rieger said. “The owner said we could keep the computers, equipment, and anything that was left there. This was very confirming that the Lord would keep providing in ways that were over and above what we would have known to pray for.

And the provision didn’t stop there.

According to Rieger, community members and churches have consistently provided financial support. One church group deep-cleaned and pressure-washed the building before opening day, and another church youth group performs monthly maintenance.

“I can put a newsletter out and say, ‘We need a vacuum cleaner’ and one shows up the next day,” Rieger said. “People have dropped things off on our porch that we were needing. I've been amazed by the eagerness to make this happen and to help things work for the center. I'm encouraged, too, that so many different churches have been so supportive.”

Next Moves for Newton PRC

With that foundation, the center is positioned for steady growth. A group of volunteers currently in training will equip the center to increase office hours from one afternoon to two. In addition, Rieger has applied for a grant to purchase more Earn While You Learn curriculum modules.

Next on the docket will be offering free ultrasounds on site. Right now, the center refers women to an obstetrical practice only one mile away, where an ob-gyn on the center’s board provides free ultrasounds to clients one day a week.

“Having the ability to offer that service in our office on the same day as a client's appointment would makes things easier on our clients,” she said. “It would also make it less likely that we would lose the chance for a client to see her baby in between her initial appointment and the ultrasound appointment.”

Her center has received a donated ultrasound machine, and in December, Rieger will find out if additional funding will be available to purchase an updated model. Meanwhile, Rieger has identified two local nurses and sonographers who have offered to volunteer their time to perform the ultrasounds.

Is it Worth It?

Even on those days when staring at the computer precludes hands-on work with mamas and babies, Rieger has never wondered if her work matters.

“Coming alongside women in difficult circumstances; meeting their spiritual, emotional, and physical needs; helping women make life-affirming choices; and empowering them and their families to thrive—all of these things are vital if we are going to help foster a culture of life in our community,” Rieger said.