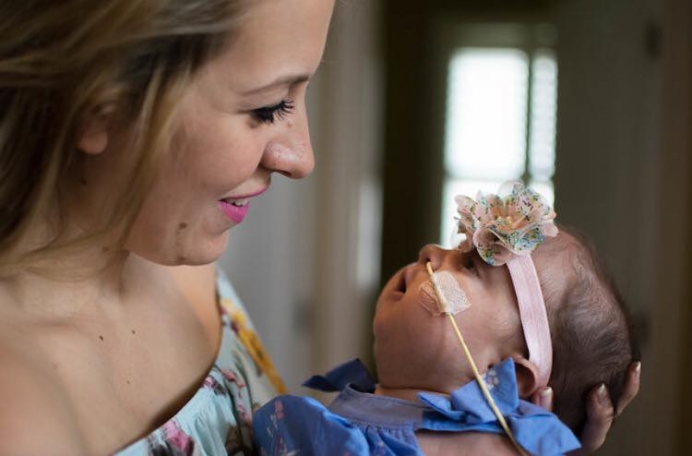 Hannah resisted pressure to abort her daughter, Evelyn - now a year old - after a Trisomy 18 diagnosis. Photo used with permission.

Ireland has long upheld the idea that a woman and her unborn baby have equal value, enshrining that conviction in its Constitution in 1937.

In fact, the stated essential equality of mother and child in Ireland’s guiding law builds upon a national tradition framed as the 1861 “Offences Against The Person Act,” which became the foundation for abortion thought in Ireland and held that mantle boldly amid a changing West.

In short, Ireland’s stance on the sanctity of life has long been a model to a world that has abandoned the most vulnerable in society.

That is, until recently, as abortion activists in Ireland push to dismantle the views the country has sustained for over 150 years.

Proponents of a new referendum are vying to repeal the eighth amendment of the Irish Constitution and potentially introduce language that could allow for the abortion of an unborn baby up to 12 weeks’ gestation.

As reported by The Guardian, abortion advocates hope to force a vote by the end of May, to make sure the nation’s students are represented. Pressure from outside Ireland’s borders has no doubt played a key role in the current drive to dismantle a cornerstone of Irish law.

Because Ireland protects unborn lives, abortion campaigners have complained that women are forced to choose between a “non-viable pregnancy” and traveling outside the country to abort their babies. In one specific instance, an Irish woman, Amanda Jane Mellet, learned at 21 weeks that her baby had a heart defect in 2011.

After further examination, doctors determined that her baby had Trisomy 18 and he or she would die in utero or shortly after birth. She went along with the doctors’ advice to abort the child, traveling to Liverpool to carry out the procedure.

As related by the 2016 U.N. Human Rights Committee, on her way home from Liverpool,

“[Amanda] was bleeding, weak and light-headed. The hospital in Liverpool did not offer any options regarding the baby’s remains, and the author was compelled to leave them behind. She received the ashes, unexpectedly, three weeks later by courier, which deeply upset her. The travel abroad also interfered with her ability to mourn her loss.”

“The hospital’s failure to offer her bereavement counselling, before and after the termination, hampered her ability to cope with her trauma.”

While Amanda’s story was meant to exemplify the evil of Irish law, it’s rather the opposite. Amanda’s experience is yet another tragic declaration of the injurious effects abortion has on women—both physically and emotionally. What’s more, Amanda’s recognition of the need to grieve her baby speaks to the fact that deep inside, she knew this precious human being had value.

Sadly, Amanda did not choose life. But, Hannah, a young American woman, did.

Just like Amanda, a friend of mine named Hannah found out her daughter was diagnosed with Trisomy 18 in the womb. Because she lived in the U.S., Hannah could abort her baby after that diagnosis, but instead, she chose life.

Tweet This: What #abortion campaigners in #Ireland, elsewhere, fail to see: In a word, hope. #prolife

Here’s what she had to say about her daughter Evelyn:

When the news came back that Evelyn had Trisomy 18, my OB's partner had already scheduled my termination and told the specialist who delivered the news that I would be aborting Evelyn. Praise God for the day I found a new doctor's office who honored every wish I had with Evelyn and still congratulates me to this day.

Disability is not a means to justify abortion, and these babies, unlike what their medical textbooks say, ARE compatible with life. I know we don't know half of the issues that Evelyn may have or develop, but I also know that if Evelyn has 10 years ahead with us, and we pray we do, I will also be 10 years older, with more grace, knowledge and love, to care for those issues that may arise better than I could now at 24.

Even on my worst day of being pregnant with her, being told by other doctors I would likely wake up one morning and she would be dead, I knew the privilege of carrying her was something to not take for granted. Many women who can't have children would gladly take my worst day with Evelyn in exchange to be able to carry a baby of their own. Each life is a gift, with his or her days already numbered and laid out before our God.

And for that small percentage which is less than 3% but every pro-choice person likes to zone in on, if a woman's life is sincerely at risk, an emergency C-section will then save the woman's life and give her child a chance to see life-saving intervention as well. Abortion is never the option. Every life matters.

Evelyn celebrated her first birthday in October 2017, and is now a big sister to Esmè, who was born in September 2017.

We in the pro-life movement know it wasn’t the travel that broke Amanda’s heart. It didn’t matter where the “procedure” was carried out. It was the termination of her unborn baby’s life. A beautiful child, who, like Evelyn, could have celebrated her first birthday and met her baby sister.

The current law in Ireland promotes a culture of life and encourages stories of beating the odds—stories like Evelyn’s. As we approach the coming months, we pray along with our Heartbeat International affiliates in Ireland that the country would stand firm against the external pressure to conform.

We pray Ireland would continue to uphold the tenets of human dignity in defense of those the rest of the world has long since abandoned.