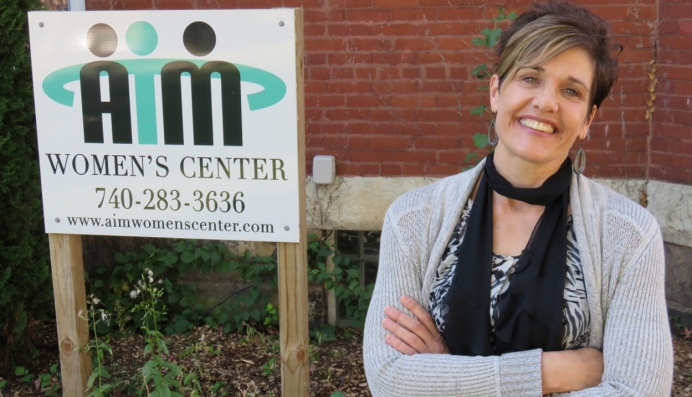 Victoria Fallon chose life for her daughter 30 years ago thanks to AIM. Now, she serves as the organization's director. Photo Courtesy: AIM Women's Center

Victoria Fallon walked through the doors of AIM Women’s Center in 1987 as a single woman with an unplanned pregnancy. Thirty years later, she’s running the center that helped her choose life for her eldest daughter.

“The organization has had a place in my heart for years,” Fallon, who was named AIM’s director last July after working as development director since 2012, said. “I have genuine sympathy for the women we serve. There’s no place I’d rather work."

Following a turbulent end to her high school days in Connecticut, Fallon left home for Franciscan University in Steubenville, Ohio. Just two weeks into school, she found out she had shown up to the Catholic campus already in the early stages of a pregnancy.

Although some in her life encouraged Fallon to abort, she resisted the pressure and mustered the courage to tell her parents. They encouraged her to stay in school and to reach out to someone at the university who could help.

When she did, that university staffer pointed her to AIM, which had opened its doors near Franciscan’s campus earlier that year.

“It was a small organization then and so many things were different at that time,” Fallon said. “They helped me find a place to live, and I received counseling.”

With AIM’s help, Fallon gave birth and placed her firstborn daughter into the hands of an adoptive family. She went on to finish her degree at Franciscan—re-embracing her Catholic faith along the way—then met and married a man with whom she would have seven children.

While she was pregnant with their youngest in 2005, Fallon’s husband died. But, around the same time, the daughter she had placed for adoption 18 years earlier with AIM’s help reached out and met Fallon and her family.

When her first daughter was married a few years after they reconnected, Fallon was there to watch.

“Because of AIM, I really believe I’m the woman I am today,” she said. “My life would have taken a totally different direction if not for AIM. God really blessed me over the years.”

Tweet This: "Because of the pregnancy center, I'm the woman I am today." #prolife #pregnancy @WyoAuthor1

Once Fallon’s youngest child was off to school, Fallon started working part-time at AIM, which eventually led to her current role as executive director.

Located along the Ohio River, AIM is the one of just two pregnancy centers in a 25-mile radius that includes portions of West Virginia and Pennsylvania. Three Planned Parenthood clinics are within a 45 minutes drive, east toward Pittsburgh.

With a primarily part-time staff of five, plus 14 volunteers, AIM helps women with material assistance and parenting programs as well as free pregnancy testing and ultrasounds—a service the center added just before Fallon joined the team in 2012.

“We have the potential of reaching more women,” Fallon said. “We have a whole new area we can reach (with our services),” she said. “We want to be as effective as possible. We have to out-perform Planned Parenthood.”

In their ongoing pursuit of out-performing the abortion giant just a short drive away, Fallon and her team are on the verge of adding free STD/STI testing, as well as new evening hours to allow AIM to serve more clients who are in the same situation Fallon found herself in 30 years ago.

One tool they’ve found helpful along the way is CompassCare’s Linear Service Model, which—among other benefits—has allowed Fallon to become more precise in her center’s data collection, analysis and reporting.

“We’ve already begun bringing in more patients,” she said. “It’s a very effective way to reach women, and give an account to our donors.”