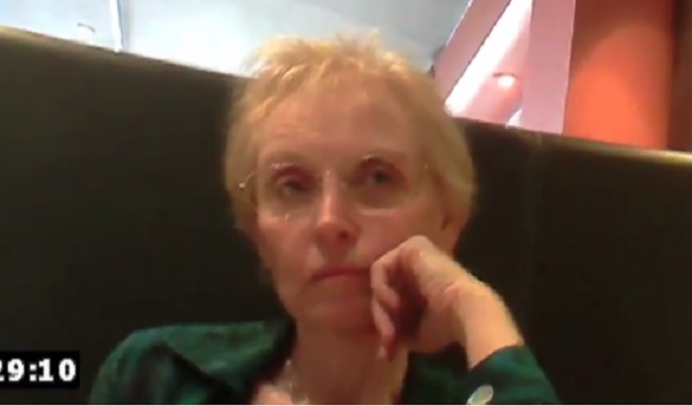 At first glance, a second video from the Center for Medical Progress appears to pack less punch than the first, where the abortion giant’s top medical director, Dr. Deborah Nucatola, talks of harvesting organs from pre-born children, crushing certain body parts in order to procure others, and of making extra money in the process for Planned Parenthood.

If one looks casually at the video released Tuesday, one might surmise that Dr. Mary Gatter, President of Planned Parenthood’s Medical Director’s Council, appears disinterested in making a profit (she jokes of wanting to own a Lamborghini) and doesn’t seem to be haggling over pricing.

This will be Planned Parenthood’s defense and for many in the media, it will likely work.

Yet, the discerning viewer is going to see two major flaws in this defense.

When the actors, posing as a procuring company, ask, “What would you expect for intact tissue?” Gatter begins the process. “Well, you know in negotiations a person who throws out a figure first is at a loss, right?” Gatter says.

This is a salient point. Gatter did not say she needed to check on staff and facility costs needing to be reimbursed. If she had, the entire conversation would have been legal (albeit horrifying).

But her focus is not on reimbursement; instead she zeroes in on finding what the open market will bear.

Gatter opens the negotiations with a figure of $75, but after the actors say her number is too low, Gatter is more than open to a $100 figure. While she alludes to the idea that “the money is not the most important thing,” not once does Gatter say Planned Parenthood is just trying to recoup expenses. In fact, she goes on to say, “But it (the money) has to be big enough that it makes it worthwhile for me.”

Gatter’s tone is smooth, but she is selling tissue and organs. And because she is open to raising the price, this is a sale. This is illegal.

At another point, Gatter also mentions the company, Novogenix, which harvested organs at Planned Parenthood. According to Gatter, a Novogenix representative (Heather) would come to the PPFA clinic and handle the harvesting. Planned Parenthood’s only role was gaining consent from patients.

Gatter says, “Logistically it was very easy for us. We didn’t do anything. So there was compensation for this.”

If Planned Parenthood is doing nothing, and a company is paying for the harvested body parts, by definition this is profit.

Planned Parenthood will no doubt defend itself by trumpeting Gatter’s “money is not the most important” line. But let’s not overlook the rest of her statements. When asked if $100 per specimen would make her happy, Gatter says, “Well, let me agree to find out what other affiliates in California are getting, and if they are getting substantially more, then we can discuss it then.”

In other words, the price goes up if the $100 figure is lower than what other affiliates are making in the deal. It is clear Planned Parenthood has no set reimbursement figure that would maintain a not-for-profit status for these transactions.

This is in direct contradiction to PPFA President Cecile Richards’ public statement where she claims, “I want to be really clear. The allegation that Planned Parenthood profits in any way (emphasis hers) from tissue donations is untrue (emphasis ours).”

According to two videos now, this is a false statement. Anyone can quibble over how much Planned Parenthood profits, but make no mistake; affiliates are making money. Let’s say it again: This is illegal.

We knew this all along, by the very nature of the abortion business.

But in the video, Gatter is posed with the idea of harvesting intact children who are 10-12 weeks old. This creates a dilemma for Gatter, who says, “Let me explain to you a little bit of a problem; which may not be a big problem.”

She goes on to explain that, under current protocols, PPFA uses suction for these abortions, which typically does not yield usable tissue or organs. Gatter explains that to use the IPAS method (Medical Vacuum Aspirator) with “a little less suction” to “increase the odds of an intact specimen” could be an issue, but not much of one:

“Then we’re kind of violating the protocol that says to the patient, ‘We’re not doing anything different in our care of you.’ To me that’s kind of a specious little argument; and I wouldn’t object to asking Ian, who is our surgeon who does these cases, to use an IPAS at that gestational age, in order to increase the odds that he’s going to get an intact specimen. But I do need to throw it out there as a concern because the patient is signing something and we’re signing something saying we’re not changing anything in the way we’re managing you just because you agree to give tissue.”

Did you see that? “We’re signing something saying we’re not changing anything in the way we’re managing you just because you agree to give tissue.” Yet this is exactly what Gatter plans to do. Exactly.

When asked how she feels about this, Gatter is quick to get the negotiations back on track:

“I think they’re both totally appropriate techniques, there’s no difference in the pain involved; I don’t think the patient would care one iota. So yeah, I’m not making a big fuss about that.”

Protocols are in place for a reason, to put patients first. Yet within seconds, a Planned Parenthood executive leaps from “we’re kind of violating the protocol” to “I’m not making a big fuss about that.”

Tweet This: #PPSellsBabyParts videos will only grow the need for #prolife pregnancy centers. @HeartbeatIntl @inspirelifenow

Why the leap? Money. There is no other explanation. None.

Pregnancy help organizations (PHOs) offer a clear contrast to Planned Parenthood, as was pointed out on this site yesterday. As the Planned Parenthood scandal continues to unfold, PHOs would be wise to make three clear points:

First, for every client or patient who comes in our door, PHOs only give resources. We never take, and we never sell. Planned Parenthood sells. For profit.

Second, PHOs serve both mother and child (and fathers, too). Planned Parenthood cannot make this claim. Ever.

Third, PHOs bring hope. Can anyone view these videos of top Planned Parenthood officials and say, “They bring hope?”

More videos are coming, we are told. With each one, the need for PHOs only grows.