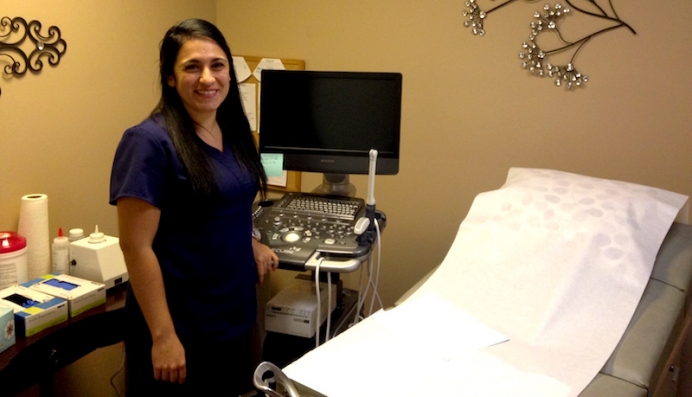 From 'Business as Usual' to 'Window into the Womb' in Cleveland, Tennessee

Ultrasound? "Well, that costs a lot of money. Why do we need to do that?"

Tracie Shellhouse, CEO of New Hope Pregnancy Care Center in Cleveland, Tenn., heard this objection often when she and her board first announced their decision to “go medical.”

“This ministry had been doing pretty much business as usual for 27 years,” Shellhouse said. They offered free pregnancy tests, options counseling, and an Earn While You Learn program, along with their Hope Chest boutique. They had saved at least 570 babies since 2005 and led 300 people to faith in Christ in the last 20 years.

“The thing is, though, those pregnancy test numbers were slowly declining,” Shellhouse said. “When we first started doing pregnancy tests back in 1986, they were a lot more expensive. We had something that our clients perceived as valuable. Now [pregnancy tests] are so easily and cheaply obtained, it just got harder to get people through our doors.

“So adding ultrasound will not only bring more people through our doors, it empowers us to show them life in the womb. Once they see the child, it stops being ‘the pregnancy’ and becomes ‘my baby.’ That is a great bonding experience, and that bonding experience is very powerful in helping an abortion-minded or abortion-vulnerable client choose life.”

Development Director Delaney Walker cited statistics to back up this observation. “When you have options counseling with abortion-vulnerable or abortion-minded clients, about 50-60 percent of them will choose life,” Walker said. “Introduce ultrasound, and they are able to see their baby; they have that window to the womb. [Then] 80-90 percent of them are more likely to choose life.”

Numbers like these helped the center’s supporters recognize the value of hope offered through ultrasound. However, getting supporters on board was only the first of many challenges Shellhouse and her team overcame to reach that milestone.

Other obstacles included actually raising the money and transitioning the center’s policies and procedures to a medical center’s level.

“I'll be honest: it's a hard process,” Shellhouse said. “It's tiring. But it's also really rewarding because you know the difference it's going to make.”

An Experienced Voice for Life

Hers is the voice of experience, having helped two other pregnancy centers during their medical conversions.

As a volunteer at Sav-a-Life Shelby in Pelham, Ala., Shellhouse was the advocate working with the first woman to receive an ultrasound there. Next, she served as executive director at Pregnancy Resource Center of Fort Bend County in the Houston metro area.

There, she launched the medical conversion herself.

“I received a lot of equipping there for what I'm doing here,” Shellhouse said. With that equipping, she dove right into work at New Hope Pregnancy Care Center in June of 2011.

Tweet This: Once they see the child, it stops being "the #pregnancy," and becomes "my baby." #prolife #ultrasound

“[As] part of the process that had already begun before the decision [to go medical] was made, I started updating paperwork and policies and procedures and getting us to a more professional level,” Shellhouse said. “We started doing more in-services and training, and quite honestly, requiring of our volunteers to be more informed and [to] operate as professionals.”

Once the decision to go medical was announced at a fundraising banquet in March 2013, raising the additional $160,000 the center needed for its conversion began in earnest.

The St. Therese Knights of Columbus raised the $24,000 needed to purchase the ultrasound machine itself. All the rest came from “countless donors and many churches, … grants from the United Way Health Endowment Fund, Bradley County Sunrise Rotary, and the George R. Johnson Foundation, just to name a few,” Shellhouse wrote in her fall 2015 newsletter.

With the fundraising progressing, New Hope tackled its needs for a larger facility and trained medical personnel.

Dr. David Chaffin, a radiologist, had already been serving as a supporter and board member with New Hope for seven years. He stepped from his position as board chairman to become the volunteer medical director who reads the ultrasound scans. For the Nurse Manager, the center hired its own volunteer Alondra Cooley, drawing on her experience at nearby Tennova Healthcare Women’s Center.

“I love hiring from within because if someone is already here volunteering with our mission, that shows me their heart,” Shellhouse said. “They're willing to sacrifice in their own lives, to give up their own time, their own resources to stand for life.”

Growth that "Far Exceeded What We Asked or Imagined"

The personnel were in place. The funds poured in. Sparrow Solutions (Sonography Now) provided sonography training; Chase Advancement Inc. guided the center through their conversion logistics. All New Hope needed next was more room.

In July 2015, New Hope moved into an 11,500-square-foot former medical office they purchased for less than $35 a square foot. The floor plan allowed for a room in the heart of the building to be dedicated solely to prayer. New Hope opened their new doors the following month.

One year later, in July of 2016, the first patient received an ultrasound in the new facility. “God by far exceeded what we could ask for or imagine,” Shellhouse said.

“We are one or two blocks away from a major university, and about three miles from the community college,” Shellhouse said. “We are in the downtown, where people can park and have it not be so obvious that they are at the pregnancy help center. We are within a half mile of the most impoverished area of Bradley County” where public transportation is available.

The center’s medical services now include limited obstetrical ultrasounds, nurse-administered and pregnancy tests, nurse-provided proof of pregnancy, prenatal vitamins, and discussion of STD/STIs with a medical expert. Nine staff and numerous volunteers team up to provide these and the non-medical services.

New Hope supports the Cleveland community through MOMS mentoring group, Fatherhood Fraternity, as well as H.E.A.R.T. (Healing, Embracing, Acknowledging, Remembering and Treasuring) groups for men and women grieving the loss of a child through miscarriage, stillbirth and infant loss. Their goal is to support all people involved with a pregnancy.

“You can't say we only care about the babies if we're ministering to those who no longer have their babies,” Shellhouse said.

Having been through three transitions to ultrasound services at pregnancy help centers, Shellhouse is convinced the addition is well worth the effort. Shellhouse, Walker, and the rest of the team at New Hope are now seeing the daily results of a long journey to offer women a window into the womb.

Tweet This: "When they see their baby, they have something to fight for." #prolife #pregnancyhelp #ultrasound

“What you're doing by showing them that baby on the ultrasound machine is giving them hope,” Walker said. “Everything at that moment can seem so terrifying. But when they see their baby, they have someone to fight for.”