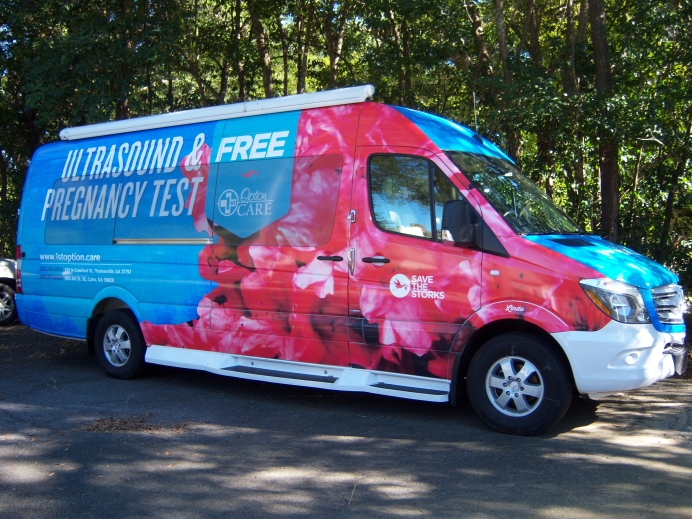 For a long time, Danny Hendrix was dead-set against having children.

"For years and years I was just really selfish," he said. "I didn't want to have kids because I wanted to live my own life, and I didn't think I was ever going to have kids."

That all changed after Hendrix attended a three-day retreat, where he said God spoke to him.

"I went from the guy who never wanted to have kids and my wife wanted to have kids, and I came back after three days and told her I was ready to have kids right now," he said, noting that his wife was "a little freaked out" by his swift about-face. "So we started our own family and I've been very pro-life ever since."

The next destination on Hendrix’s God-led journey to embracing fatherhood and family would be First Option Care, formerly Pregnancy Center of Southwest Georgia, where he's served as executive director for over two years.

Hendrix started out as a two-term, 6-year board member for the pregnancy help organization, which operates centers in Thomasville and Cairo, Ga. Shortly after the center’s executive director, Linda Carter, unexpectantly passed away in May 2013, Hendrix, who had just rolled off the board a few months earlier, was asked to take the helm of the pregnancy help organization as its next executive director.

Hendrix is now leading First Option Care in reaching a major milestone in the history of the 10-year-old pregnancy help organization—medical conversion.

First Option Care will begin offering ultrasounds to its clients during the first full week of January 2016. It was a goal that had to be pursued and reached in a time when advanced medical services are fast becoming seen as a necessity for relevant and effective pregnancy help ministry.

"Within our industry, we use that term 'medical,' but we've offered limited resources,” Hendrix said. “The more we can expand the offerings we have, the more credibility we get from the outside."

"For us, it was important to add [ultrasound] mainly for life-saving, but also for a little more credibility."

First Option Care's Earn While You Learn program and post-abortion recovery services have been a big piece of the ministry's offerings to the local community. In fact, the pregnancy help organization is known and utilized most for its quality aftercare pregnancy help services.

"We've always been traditionally that way," Hendrix said. "But there are a lot of opportunities to reach more girls and reach more abortion-minded girls. That's how we got to the medical process. It was something we'd been talking about for years and years when I was on the board."

Hendrix said while time and money were deterrents to beginning medical conversion, he remained profoundly zealous about the opportunity and gave little thought to the details—an audaciousness God used to fuel the feat.

"When I came in [as executive director] God knew I would be 'dumb' enough to jump on it before I thought real strongly about it, so I did,” he said.

While pondering the pathway to medical conversion and considering the options, the First Option Care team remembered seeing Save the Storks at a Heartbeat International Annual Conference. Hendrix’s team called up Save the Storks, which provides mobile medical vehicles to pregnancy help centers, to discuss figures, and ultimately decided purchasing a Stork bus was the most cost-effective way to go.

Both the Thomasville and Cairo locations lacked the space to serve the inevitable increase in clients that many medically equipped pregnancy help centers almost immediately experience. By purchasing the Stork bus and an ultrasound, First Option Care will not have to worry about relocating to a larger building or having to retrofit its current centers to accommodate medical conversion and increase in clients, Hendrix said.

Tweet This: Add one more #prolife center to the growing list of 1,000+ free ultrasound services in U.S.

Instead, the new bus, named 'Linda' in memory of First Option Care's late leader, will be parked outside the Thomasville center three days a week and stationed outside the Cairo center one day a week to serve its clients.

Non-medical appointments like Earn While You Learn, breastfeeding classes, options counseling and Bible studies will take place inside the pregnancy help center building. All clients will check in at the lobby of the center they're visiting, where more counseling rooms will be added, but all medical services will take place on the bus, Hendrix said.

"Once they're checked in and do all their paperwork, if they're getting a pregnancy test, the nurse will come out and get them and instead of taking them back to a counseling room, she'll take them out to the bus," he said. "There's a bathroom on the bus. They'll do the pregnancy test there and then if they are pregnant, hopefully we immediately do an ultrasound then. There's a counseling area on the bus. Everything can happen for that medical visit there."

The First Option Care team also plans to take its new ultrasound bus to community health affairs, schools and other local events, which will provide the organization with more opportunities for life-affirming ministry.

Hendrix said he is hopeful that someone will send in the needed $30,500 to cover the remaining debt for the ultrasound, a resource that will undoubtedly bring in more abortion-minded clients and connect more women in need to their services.

"We hope it’s going to give us another opportunity to reach a lot more distinct clients, different clients, new clients, but the hope is to share the love of Jesus Christ with more people,” he said.

“That's the heart of the ministry."