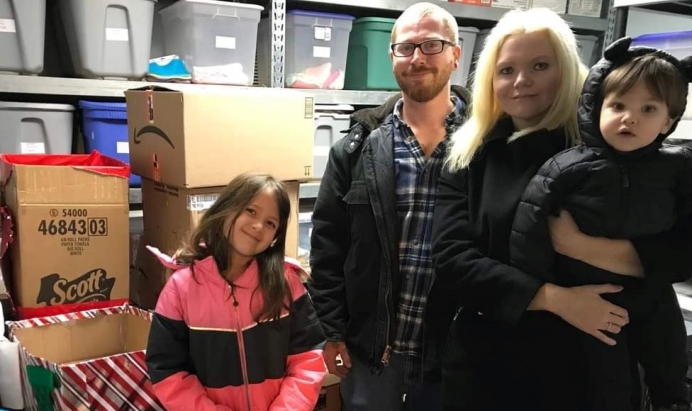 A common argument made by abortion advocates is that it is “better” to kill an unborn child facing a grim prenatal prognosis. But that’s an argument Kiara Bollinger would never buy.

The Pennsylvania woman chose life in the face of the all-but-certain loss of her unborn son, and despite that loss, her son’s life was full of love and has prompted the family to give back to the community.

Panic and pain struck the hearts of Kiara and her husband Eric when she was three months pregnant with her son, Evan. She was told he was “not compatible with life” after a diagnosis of Trisomy 13, a fatal condition in which copies of the 13th chromosome are created. It leads to Holoprosencephaly, which causes the brain to not divide properly into hemispheres.

Knowing babies don’t survive Trisomy 13, doctors began to apply pressure on Kiara to abort her son Evan. She refused and continued with the pregnancy.

He was born on January 7, 2019. Knowing the sand was already running out of the tiny hourglass of his life, they cherished every single moment with him. Every. Single. One.

When Kiara was pregnant with Evan, she had played the song “Simple Man” by Lynyrd Skynyrd to her belly every day.

“When Evan was born, we played his song during labor and every day in the NICU several times a day,” she said. “I believe he did know the song. He would move his feet and sometimes grip our fingers when we played it.”

Kiara and Eric were only able to hold Evan once a day because it took a whole team to move him into their arms.

“When we held Evan, we would wrap him in a baby blanket and give him cuddles, read him stories,” she recalled fondly. “We had [gone] to Build-a-Bear and made two bears exactly the same. One for Evan and one for us.”

Evan would hear his bear repeat a recording of his family saying “I love you” all together. Their bear featured his heartbeat.

“We would stroke his face with the bear's fur,” Kiara said. “I still have my bear.”

“He would put our hands in his crib with him and stroke his head,” she recalled. “Evan had a little patch of dark hair. It curled a bit.”

Kiara and Eric also have an older daughter, Sara. She loved reading her stories to her baby brother.

“She always practiced reading by reading to my belly,” Kiara said of Sara. “She met Evan in the hospital and read him a story. I have a video of it. It melts my heart.”

The Bollinger family had one week with Evan before he died.

It was a week full of incredible love. And it wasn’t Kiara who ended her son’s life. She and her family gave him love, and he returned it. Abortion would have wiped out that experience and replaced it with only pain.

“For us it wasn't even a moment that the thought entered our minds,” Kiara said of the prospect of intentionally taking Evan’s life. “I believe abortion is morally wrong and against my family's values. I would have been personally responsible for his death. I would never have signed my child's death warrant myself before he even had a chance to feel our love.”

Tweet This: I would never have signed my child's death warrant myself B4 he even had a chance 2feel our love - mom on choosing life despite Trisomy 13

It was that chance to experience love that made Evan’s brief life so important.

“What I wanted for my son, from the moment of his diagnosis, was for him to know that no matter what, we love him,” Kiara told Pregnancy Help News. “We made every day count from that moment just in case. Evan knew we loved him.”

He is now buried with his bear and a journal the family made for him.

Kiara made another crucial point: Doctors are not right every time during a diagnosis.

“If you give up on your child and count them out before they even have a chance, everything is lost,” she said. “You lose the chance to ever know what could have been.”

And she offered a personal and powerful example to back up that claim.

“My family friend was told her daughter would be born with cerebral palsy,” Kiara recalled. “She was offered an abortion and chose not to have one. Her baby did not have cerebral palsy at all or any health problems. She is alive, healthy and well.”

“On the other hand, I have a friend who does have cerebral palsy, and she is happy and lives a quality life,” she added. “If you don't even try, you'll always have that ‘what if’ in your brain.”

Not all doctors advocate for abortion when the prognosis is grim, but sadly that’s what Kiara experienced while pregnant and knows many other women likely have and will face the same scenario.

“Our first doctor was so, so cold and unfeeling in giving us the diagnosis,” she said. “She said two sentences about what she thought was wrong and then offered us an abortion.”

“Our second opinion had a better bedside manner at first,” Kiara continued. “As it became apparent we would not be terminating the pregnancy, the doctors seemed to get frustrated with us. On our third doctor switch, I decided they were all like that and I needed thicker skin and to assert myself. I advocated for myself and my son's rights.”

At one point, Kiara rushed to the ER for what she thought was preterm labor.

“The on-call OB/GYN looked at my chart and immediately said to me, ‘You know what its life expectancy is, right? Do you even want us to put it on the monitor?’"

Feeling a rush of anger, Kiara argued to get what any other woman late in pregnancy would have received, and a caseworker working on her behalf even filed a complaint.

In most cases, doctors were simply not seeing any value in Evan.

“If I had chosen to terminate our pregnancy, at no point would a doctor been able to say they thought it was wrong,” Kiara said. “I hate the double standard.”

Beyond all the love that transpired during Evan’s brief life, his passing also inspired his family to get involved in the passing of Simon’s Law. It’s a state bill named after Simon Crosier, who also suffered from Trisomy.

The law would prevent medical staff from putting a DNR on the medical charts of babies without permission from the family. This happened to Simon, who was given the minimum amount of medication and nutrition, speeding up his death at three months old.

Kiara said Evan faced something similar, being denied surgery on his heart due to his diagnosis. The Bollinger family, among many others, believe parents should make health decisions for their children. Not a third party.

Evan also inspired his family to establish “Be Kind for Evan Bollinger,” a project where the Bollinger family performs acts of kindness throughout their community. They have already held a backpack giveaway, a toy drive, a collection of baby items for a pregnancy center, and begun a support group for infant loss.

All out of love. All inspired by their little baby boy. The one they would not abort but instead held close and loved.

“Tomorrow is never promised to any of us,” Kiara said. “Evan was special. I believe he was a gift to me and my family. He was cherished and adored. Every moment with him was amazing. My life is better for having my son, even if he didn't live long. I wouldn't have it any other way.”

Tweet This: Tomorrow is never promised 2 any of us. My life is better 4having my son, even if he didn't live long. I wouldn't have it any other way