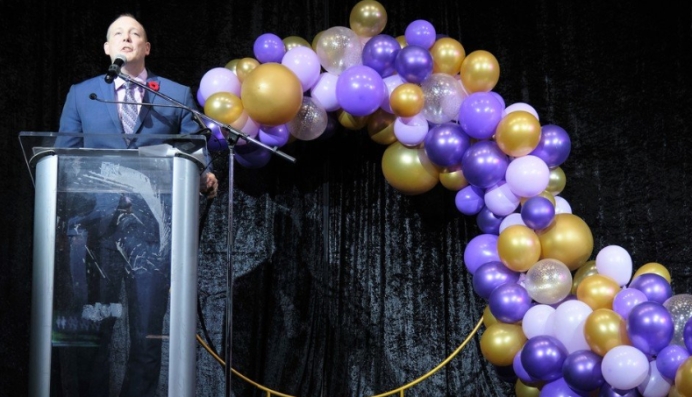 Jared White of Advokate Life and Education at its annual Celebrating Life Gala. The organization’s programs include an educational initiative for teens and young people and a program to link new mothers with supportive women. Nicholas Elbers via the B.C. Catholic

(The B.C. Catholic) A sexual health integrity program for young people and a mentorship initiative for new mothers are among the ways Advokate Life and Education Services plans is offering alternatives to society’s pro-choice view of human dignity.

Advokate is best known for its pregnancy centres (in Abbotsford, Langley, and Prince George) that help mothers going through crisis pregnancies. White told the gathering of approximately 400 people that the centres served 440 unique clients this year and were responsible for the births of at least 25 babies whose mothers were considering abortion.

He also announced that all three centres now have their own ultrasound machines, a significant development because ultrasound machines help mothers connect to their unborn children, which has been linked to healthy brain development of the fetus and reduced likelihood of postpartum depression for the mother.

Beyond the Bump is another community-building initiative run by Advokate to help mothers after they give birth. Through Beyond the Bump the mother can count on mentoring, meal, and clothing support. Last year the program helped 30 women better adjust to living with their babies.

White also outlined a new program called Reclaimed which will offer counselling and support for post-abortive women. The program is available to all women, of any age, who have had abortions at any point in their lives.

A highlight of the annual dinner is the profile of a mother who has chosen life through Advokate. This year’s featured woman was Rikki-Anne, a mother of two who found herself in a difficult pregnancy.

In her testimony, Rikkie-Anne said Advokate gave her space to engage with her feelings and work through the worries she had.

Rikkie-Anne’s mother and her partner had pressured her to get an abortion and she had been worried about being a good mom and providing for another child.

Advokate counselled her through the pregnancy and, when her baby needed to stay in the neonatal care unit for a month, found Rikkie-Anne accommodations in Vancouver so she could be near her baby.

Addressing women who might be considering an abortion, Rikki-Anne said, “I just want them to know they aren’t alone.”

Tweet This: “I just want them to know they aren’t alone” - mom served by pregnancy help through British Columbia's Advokate Life and Education Service

“No one is immune to an unplanned pregnancy”

The first woman to successfully reverse a chemical abortion attempt says she never would have considered an abortion if it had meant undergoing a surgical procedure.

Rebekah Hagan, Mission Advancement Officer at Heartbeat International, told Advokate Life and Education Services’ annual dinner that said she was coerced to try a chemical abortion because it didn’t feel as real as a surgical procedure.

“If a surgical procedure [had been the only option] I couldn’t have done it,” Hagan said.

As the product of a self-described “good” Sacramento Baptist family, Hagan hopes her story will prompt greater vigilance and perspective from pro-life people.

Hagan’s story challenged the narrative of where abortions typically are thought to happen.

“No one is immune to an unplanned pregnancy or an abortion decision,” she told gala attendants.

Her son Zachariah was conceived during an abusive relationship with the father of her first son, born from a teenage pregnancy.

She took the pregnancy test at her parents’ house and in fear of their response, she searched online for solutions to an unplanned pregnancy.

What she found was a large collection wholesome-looking websites advertising chemical abortions.

“Look at this woman, she is sitting on her bed and happy,” she said, pointing to an ad for a common chemical abortion provider.

The reality, when she went to an abortion clinic, was completely different from the website image. The other women in the waiting room seemed defeated and there reluctantly.

Although pro-choice rhetoric has long focused on the empowering nature of abortion, Hagan said her experience showed her a starkly different reality.

“I can tell that was not a room full of powerful women,” she said.

She left the first clinic and went to a Planned Parenthood facility, where she was offered a progesterone blocker. “It’s best not to look, and (just) flush,” the clinic representative advised her. She swallowed and said “it felt like Satan had blown out all the candles.”

The progesterone blocker is part of a two-part process that starves the unborn child the progesterone needed to survive in the womb. The second pill Hagan was supposed to take later that night was to induce labour – something not told to her when the pill was handed to her.

In the parking lot outside she broke down as she realized it was her baby son’s birthday. She reflected in horror that for the rest of her life her son’s birthday would be a reminder of the child she killed.

In desperation she searched for a solution and found a small pregnancy centre that offered pro-life services. Its website urged women having second thoughts about a chemical abortion to call.

The woman at the clinic took an interest in her story, asking her why she decided to get an abortion as well as “real questions about my life and circumstances,” Hagan said.

She was then told about the possibility of reversing the progesterone blocker. Hagan decided to give the process a try. Her son Zachariah was born healthy, one of thousands of other children who have since survived a chemical abortion attempt.

Hagan hopes people who hear her story will come to a more substantial understanding of the current reality of abortion. One of the reasons she went as far as she did was because her parents “had no idea that the abortion industry had progressed so far that their daughter could be in her room getting a chemical abortion while they slept,” she said.

Editor's note: This article was published by The B.C. Catholic and is reprinted with permission. Heartbeat International manages the Abortion Pill Rescue® Network (APRN) and Pregnancy Help News.