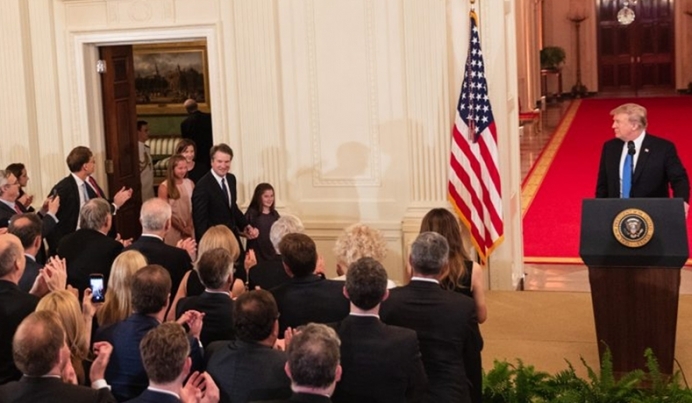 Don’t do it, Kirk. Do not write about Judge Brett Kavanaugh. This was my self-imposed rule, based on several factors.

For one, news on Kavanaugh is changing every hour. There’s no way to keep up, especially for a guy like me who writes an opinion column once a week. What I send on Wednesday may be old news when the column shows up online on Thursday. It’s too risky to write about Kavanaugh.

Second, while I can examine the evidence for or against him, I don’t know Judge Kavanaugh. I can’t personally speak to his character and cannot make a definitive pronouncement on who he is (or who he was, 35 or more years ago).

Third, this column is about all of us in the pregnancy help community. It is not about the shenanigans in D.C. I don’t know about life on The Hill; I was last there two years ago for Heartbeat’s Babies Go to Congress initiative and while I was impressed with the staffers we met, I am no insider when it comes to the U.S. Senate.

So, my best course of action is to leave this one alone.

Watching the news over the last week or so, I realize this nomination affects all we do in our work to reach out to women and families making one of the most difficult decisions of their lives. Because make no mistake, this nomination—at least for those on the political left—is about abortion.

Perusing the tweets from Planned Parenthood, NARAL and others, it’s clear they’ve tossed away any mask of decency in an all-out war on this nominee. Here’s an example from Cecile Richards, former CEO of Planned Parenthood: "Let’s remember going into this week that there is one important thing Dr. Blasey Ford has on her side that her opponents don’t have: the truth."

Really? Not one person named by Dr. Ford as being at the party where her assault took place—that’s zero—has corroborated her story.

Does this mean Dr. Ford is most certainly lying? I don’t know. Just like I don’t know Brett Kavanagh, I don’t know Dr. Ford. Yet Cecile Richards—who knows neither Ford nor Kavanaugh—knows Dr. Ford is telling the truth. Just knows.

Here is what Ms. Richards most definitely knows: When Neil Gorsuch was placed on the Supreme Court, he replaced a justice who would have likely voted to overturn Roe in Antonin Scalia. With Gorsuch, Richards knew there were still five votes to keep Roe on the books.

But Justice Anthony Kennedy whom Kavanaugh would replace? He voted to hold onto Roe. His replacement—whomever it is—is the swing vote. And let’s not forget, if Kennedy’s replacement is a liberal, the recent 5-4 victory we saw in NIFLA v. Becerra could be revisited if another state’s law reaches the Court.

Now we know what this is truly about.

Diane Feinstein (D-CA) received Dr. Ford’s letter in July, then sat on it for six weeks. But why? No one knows for sure, but if the letter from Dr. Ford somehow derailed Kavanaugh back in July, President Trump would have had plenty of time to put forth a new nominee. Now, time is up. If Kavanaugh falls short, we may not see a new justice seated until 2021.

If you think I’m kidding about this, I’m not. The same liberal mobs running Senators out of restaurants will protest, shut down committee meetings and do anything in their power—legal or illegal—to make sure no nominee makes it to a vote until after the next presidential election. Count on it.

And don’t forget, as we await the next revelation in this continuing circus, let’s be clear: The abortion lobby is working hand-in-glove with Democratic leaders to delay Kavanaugh’s nomination. Dr. Ford’s allegation was first. Then, Deborah Ramirez suddenly appeared with another accusation. Let’s keep in mind Ms. Ramirez consulted with Democratic lawyers for six days to clarify her memory before telling us Judge Kavanaugh was untoward to her at a party.

Friends, this is bigger than even Roe. This is an all-out assault on anyone who even hints about pro-life views. The abortion lobby already has us in its sights. Their ultimate goal? “Win” the Supreme Court so that Roe is protected and any law they can create to use against us—constitutional or not—will be upheld as the law of the land.

This is what we face on Thursday and over the coming weekend. To the abortion lobby, the veracity of any allegations against Brett Kavanaugh are not the issue. Abortion is. And we’d best not forget it.

Tweet This: To the abortion lobby, the veracity of any allegations against Brett Kavanaugh are not the issue. Abortion is. @KirkWalden #prolife