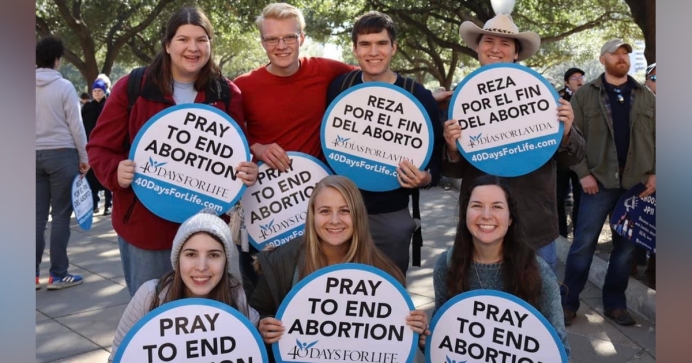 (Campaign Life Coalition) A Canadian judge ordered a pro-abortion woman and her allies in Ontario to stop sabotaging pro-life campaigns currently running in Canada by 40 Days for Life.

Dietrich also waged her sabotage campaign on the social media platform TikTok where her videos targeting the pro-life campaign garnered hundreds of thousands of views.

“Many campaigns in Canada and the US have been negatively affected by these acts,” 40 Days for Life stated in a press release about the injunction issued against Dietrich.

Justice Valente ordered Dietrich, among other things, to stop the following activities:

40 Days for Life campaigns kicked off this week [Mar. 2] in 13 cities across Canada, joining hundreds of others worldwide. The 40-day campaign aims to end abortion locally through prayer and fasting, community outreach, and a peaceful all-day vigil in front of abortion businesses.

The name “40 days” comes from the timeframe God consistently uses throughout salvation history to transform His people. For example, God washed sin from the earth with 40 days of rain in the time of Noah. The Hebrew people lived outside the promised land for 40 years as a corrective punishment due to worshipping false gods. Jesus prepared himself to transform the world by fasting and praying for 40 days in the wilderness.

Lawyer Phil Horgan, representing 40 Days for Life, told Campaign Life Coalition that he was “pleased” the motion judge “listened to our arguments.”

“It should be noted that 40 Days supports free speech on a matter of public interest, but we presented cases where interference, including online harassment, that exceeded speech could be the subject of injunctive relief.  The judge was satisfied to issue our proposed order,” he said.

Horgan said that the justice was ultimately persuaded that an interim injunction be issued to prevent sabotage and harassment against 40 Days for Life.

Matt Britton, General Counsel and Secretary for 40 Days for Life, told Campaign Life Coalition that the injunction ensures that Dietrich and her allies “will not be able to continue to sabotage the campaigns by unlawfully and falsely filling up our vigil calendars.”

Britton, along with Horgan, hope that the injunction, currently temporary, will be made permanent.

According to Horgan, Dietrich’s legal counsel has already advised that it will oppose any extension of the injunction and is already opposing the terms of the existing order.

“If the matter proceeds, it could be the subject of a future trial on the merits,” Horgan said.

Tweet This: A Canadian judge ordered a pro-abortion woman and her allies to stop sabotaging 40 Days for Life pro-life campaigns running in Canada.

Upon seeing the incredible success of the 40 Days for Life campaign in the USA, Campaign Life Coalition (CLC), kickstarted the first Canadian vigils more than a decade ago. Today, pro-life leaders and volunteers from across the country continue to organize vigils in their communities with over 20 Canadian cities taking part over the years. In just the first few days of this year’s campaign, lives have already been saved.

“CLC is pleased to see justice being done in this matter. Pro-life advocates deserve to have their campaigns run peacefully and without being sabotaged by those who support the killing of children in the womb,” commented CLC vice-president Matthew Wojciechowski.

“We’re happy that Ontario’s Superior Court took 40 Days for Life’s arguments seriously and remedied this situation in an appropriate way, sending a clear message that intimidation and harassment against pro-life efforts will not be tolerated. Kudos to 40 Days for Life for setting this precedent,” he added.

Editor's note: This article was published by Campaign Life Coalition and is reprinted with permission.