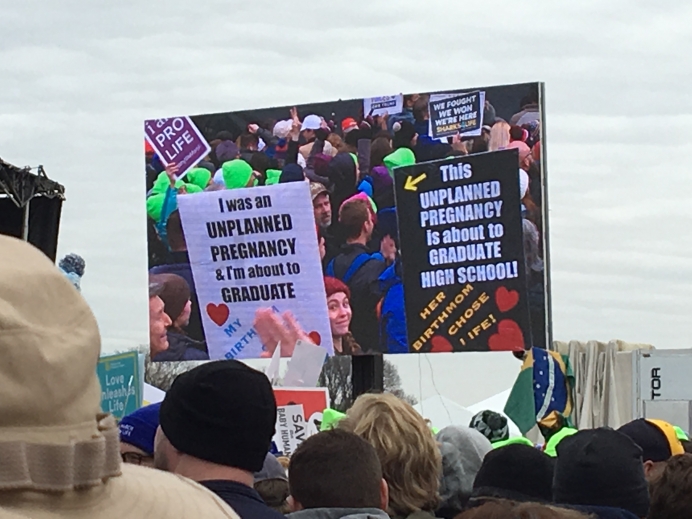 Midway through the debate, after Biden announced that he would select a woman as his vice presidential candidate, Sanders proceeded to attack Biden for his past support of the Hyde Amendment. The Hyde Amendment prohibits the use of Medicaid funds to pay for abortion, and was, until June 2019, supported by Biden.

“Right now, a woman’s right to control her own body is under massive assault, unprecedented assault,” said Sanders, a statement with which Biden signaled his agreement.

“Joe, you have in the past on more than one occasion, voted for the Hyde Amendment, which says that a woman, low-income woman, could not use Medicaid funding for an abortion. Is that still your view or have you modified it?”

Biden, a Catholic who made his faith the center of a recent campaign video, replied that this was “not my view,” and that “by the way, everybody who’s been in the Congress voted for the Hyde Amendment at one point or another, because it was locked in other bills.”

He said the reason his view on the Hyde Amendment had reversed in recent years is because  “if we’re going to have public funding for all healthcare along the line, there is no way you could allow for there to be a requirement that you have Hyde Amendment.”

Sanders replied that he was “glad” Biden had changed his view on the Hyde Amendment.

The 2016 Democratic Party platform, which was adopted at the Democratic National Convention that year, was the first in the party’s history to call for the repeal of the Hyde Amendment.

On Sunday, Biden also promised, if elected president, to cement abortion rights in federal law to protect them against future decisions by the Supreme Court. The 77-year-old candidate said he would “send immediately to the desk of the United States Congress (...), a codification of Roe v Wade amended by Casey. Because I think it is a woman’s right to choose. I think it’s a woman’s opportunity to be able to make that decision.”

Tweet This: Biden promised if elected president to cement abortion rights in federal law to protect them against future decisions by the Supreme Court.

Biden then boasted about his 100% voter-rating from NARAL, an abortion-rights organization.

Tweet This: Biden then boasted about his 100% voter-rating from NARAL, an abortion-rights organization.

Sanders described his views on abortion as “consistent,” and that “I’ve always believed in that and you have not.”

Despite Biden’s suggestion that his past votes for the Hyde Amendment were only to ensure the passage of omnibus spending bills, during his 36 years in the Senate and eight years as vice president, he has reversed himself a number of times on the issue of abortion.

While he largely supported the Supreme Court’s 1973 decision that found a legal right to abortion, Roe v. Wade, Biden said in 1974 he believed the decision “went too far.”

In 1981, he voted for a constitutional amendment allowing states to overturn Roe v. Wade; but the next year he voted against such an amendment.

In the 2008 vice presidential debate, he bragged about spearheading “the fight against Judge Bork,” a Supreme Court judicial nominee in 1987, warning that Bork would have changed Roe v. Wade if he were confirmed to the Court.

In a 2008 interview with NBC’s “Meet the Press,” Biden said Roe is “as close to a consensus that can exist in a society as heterogeneous as ours” in that it left decisions on life to the mother in the first trimester of pregnancy, allowed the states some intervention in the second trimester, and that “the weight of the government’s input” in the third trimester is that the pregnancy is carried to term.

In a 2012 vice presidential debate, Biden warned that the opposing ticket would appoint judges who would outlaw abortion, and promised that a Democratic administration would not do that.

Biden’s 2020 campaign platform calls for the codification of Roe v. Wade as federal law. It also would ensure, as part of a health care “public option,” coverage of “a woman’s constitutional right to choose.”

The topic of gay marriage was also discussed during the debate. Sanders criticized Biden for his vote in favor of the Defense of Marriage Act, which was struck down by the Supreme Court in June 2013. Sanders voted against the bill.

Biden, who has officiated at least one same-sex wedding, proceeded to credit himself for helping to change society’s view on gay marriage.

The debate, which was moved from Arizona to Washington, DC, due to fears of COVID-19, was held without a studio audience. There are three candidates remaining in the Democratic primary. In addition to Biden and Sanders, Rep. Tulsi Gabbard (D-HI) remains in the race.

Editor's note: This report was published by Catholic News Agency and is reprinted with permission.