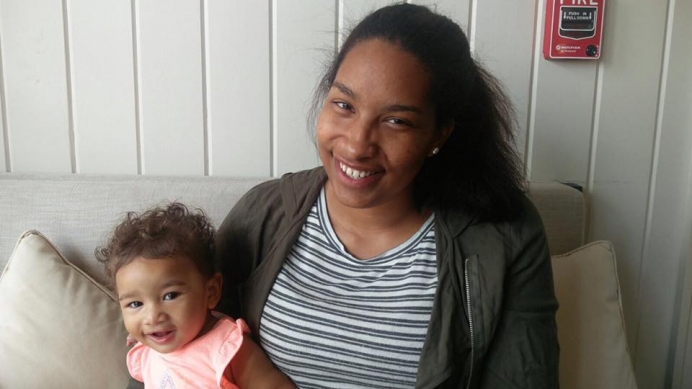 Twelve-year-old Audra Darville knew she would someday change her nation. Back then, however, she was a brand-new Christian, living far away from her family’s native Bahamas. Now, 10 years later, she is seeing her vision come to pass.

Darville now serves as Youth Education Director at the Bahamas GodParent Center, a pregnancy resource center founded by her parents, Jeffrey and Rhonda Darville, in 2015, where she forges connections with schools and churches across her island nation.

“It's been a really good response,” Darville said. “The kids are all excited about it. They say, ‘The church and our parents don't talk to us about this. We want them to; we want to know about it. We want to know how we can avoid this, but nobody's telling us how to walk away from these situations. Now you guys are here and telling us how to do it.’"

To maximize her program’s impact, Darville is developing a curriculum uniquely tailored to Bahamian students’ questions that arise in classroom discussions and surveys.

“Our culture is a little different than most,” she said. “So the way that we would present it has to be different: the way we speak, the way that we would even talk about certain topics. In the States, they're not allowed to talk about God in a lot of places, but we are. So I’m incorporating that aspect, like full-on Bible and also including our personal stories in there.

“We also play a lot of games. It's not just us talking to the students. We're raising a question, and they lead the discussion, and we show them different aspects of what we're talking about. They always come to the conclusion without us having to say, ‘Hey, this is what we're trying to say.’ It's fun and it's really culturally more specific.”

In a nation that faces increasingly crippling poverty, the majority grows up in single-parent homes, and pornography addiction runs rampant, most Bahamian youths lack real-life examples of healthy relationships.

Without positive role models in their lives, young men and women in the Bahamas are born into an uphill battle.

“Rape and incest are a big deal; violence and gang inclusion are big deals,” Darville said. “Teenage pregnancy is a huge deal. We touch on those things more than other curricula would because that's where a lot of our students are at, and that's what they're facing on a daily basis. They come back and ask us different questions, so we've been able to tailor our curriculum to what they're asking.”

Virtually all the clients the Bahamas GodParent Center has served since 2015 have dealt with multiple unplanned pregnancies. Darville’s hope is to empower youths to make wise decisions before they’re at risk for pregnancy.

“A lot of times, people come in and say, ‘I didn't think it would be me. I didn't think through this decision; I just went ahead and did it,’” she said. “Our goal is to say, No. 1: Start thinking about your decisions; and No. 2: There's hope. If you've messed up, you don't have to continue in that life; you can walk away and change."

Darville knows personally the power of God to bring about change in a young person’s life. After her parents moved from the U.S. back to the Bahamas to start the pregnancy center two years ago, Darville found herself going through a dark time, drifting from her Christian convictions while she was in college back in the States.

Things would get worse before they got better, however. In January of 2015, Darville was sexually assaulted. Then, 10 months later, she found out she was pregnant—just as she was starting her last year as a college student.

Darville graduated the following spring, while she was nine months pregnant. She gave birth to her daughter, Myra Kendra, a few weeks later and moved home to the Bahamas. As a new mom, Audra started pitching in with her parents at the Bahamas GodParent Center.

Her first task was to help lead a high school’s spiritual emphasis week, bringing a message of sexual integrity that highlights forgiveness and freedom from past mistakes.

That initial opportunity—which took place in August of 2016—led to new platforms for Bahamas GodParents and the Darvilles to bring their hope-filled message. By April of 2017, they had formed partnerships with seven schools and presented to over 1,500 students.

As new opportunities have opened up, new volunteers are joining the mission, including 24-year-old Malcolm Foulkes, who is focusing his efforts on mentoring young men. Rhonda Darville, Audra’s mother, had previously connected with Foulkes on Facebook and felt led to reach out to him and see if he’d be interested in joining the effort.

“We went to a youth group the other night, and a lot of the young men were the vocal ones,” Audra Darville said. “They were desperate for a guy that had walked in their shoes and that had turned away from that life and was pursuing the Lord and purity. We prayed, ‘God can you send someone for us to be that guy?’

“We asked him to come back to that youth group with us and he got to share with the guys, and the guys were just so encouraged. It's my mom and I presenting, and we can talk to the guys and touch on some things, and it's effective up to a certain point. Then you need a guy to be able to step in to hit on what you really can't hit on. It's been cool to see God move in that area.”

Next on Darville’s agenda is raising young men and women as peer leaders through their program Students4Life. As relationships form during prevention talks in a growing number of schools, she’s also building a student leadership base.

“We promote leadership and advocacy within the young people, because they're going to be on the front lines,” Darville said. “If one of their friends gets pregnant, they're going to be the ones that will touch them first before we ever get to them. So training them and teaching them how to advocate for life in that way and promoting, ‘Hey, you have a group to support you in your walk and purity’—that's where we're headed.

“We want to keep spreading hope. We want to get into the Caribbean eventually, partnering alongside them, because we're all dealing with the same thing.”