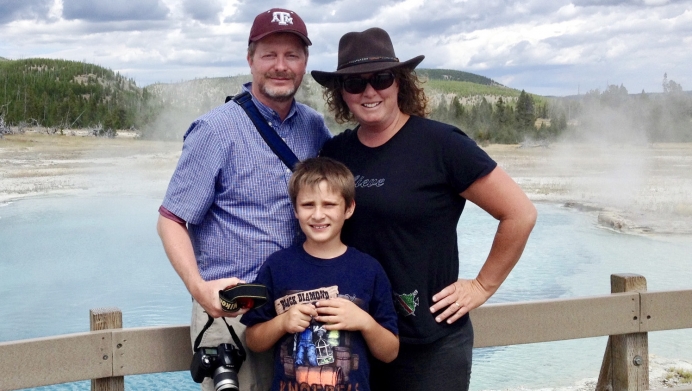 Adoptive Family: "Our Son's Birthmother is a Hero"

The moment “Anna” became pregnant through rape at age 18, the pressure was on—as far as most of her family and friends were concerned—to abort her baby.

Anna, however, wasn’t so sure. But the trauma of the situation made it feel impossible for her to consider a way forward other than abortion.

While Anna was wrestling her decision, her mother had a dream where God told her to come alongside her daughter and help her resist the pressure to abort her baby. Not only that, she was assured that God had already picked out an adoptive family for her grandchild.

From there, Anna and her mother’s first step was to visit a pregnancy help center near Denver, which connected her to a local adoption agency that would help Anna craft and carry out her adoption plan.

As she looked through photo albums for potential adoptive parents for her child, Anna came across an album of John and Darcie Gudger, who had been waiting for five long years to adopt a baby.

Since she was considering an open adoption—where a birth mother can choose to keep in contact with her child and his or her adoptive family—Anna decided to meet up with the Gudgers at a local restaurant to get to know them.

By the time the Gudgers brought their son, Kyle, to his “forever home,” they had experienced a bevy of little moments that all seemed to line up perfectly—right down to the name of the Gudger’s pet parrot, “Poncho”—which drew an affectionate laugh from Anna’s dad.

“Anyone who has a bird named ‘Poncho’ is good enough for my grandson,” John Gudger remembers him chuckling.

“God’s fingerprints were all over this,” Gudger said. “God already had a plan for Kyle to be part of our life.”

Making the decision entrust her son into the arms of his adopted family wasn’t easy for Anna—especially after such a traumatic event—and the initial pressure to abort made the situation all the harder.

That’s why the Gudgers don’t take Anna’s courage for granted when they reflect on what it cost her to give them a son.

“She wanted to be fair, wanted the best for him,” Darcie Gudger said. “She really wanted him to be in a loving home with two parents. To me, it was a sacrificial act of love on the heroic level that she went through to give us our son. This girl is my hero because she carried him after such a traumatic event.”

Nearly 11 years later, Darcie and John still view their son’s birthmother as a hero, something they’ve been intentional to share with Kyle as he’s grown.

“Kyle knew all along that he was adopted; we never hid it from him,” Darcie Gudger said. “We’ve always talked to him about his birthmother being a hero, that what she did for him was very heroic and was out of love. He’s very proud of the fact that he’s adopted.”

According to a study published by the National Survey of Family Growth, less than two percent of women choose to place their children for adoption, while authorities estimate between one and two million families are waiting to adopt.

The Gudgers hope that statistic changes, that abortion rates decrease and adoption rates increase. There’ve experienced firsthand the benefits of adoption, particularly as parents adopting a child conceived in rape—which is one of the very most vulnerable situations for an unborn baby.

“If Kyle had been aborted, look at what the world would have missed out on,” Grudger said. “Kyle doesn’t just bless us—he’s had so many people love on him, and that ministered to them. Kyle filled a hole in their lives.”

As strong Christians, the Gudgers say they’ve been troubled to see other believers—including those in positions of leadership and influence—capitulate to the pro-abortion narrative of abortion in the case of rape as an “exception.”

Though the pro-abortion Guttmacher Institute finds that less than half of one percent of all abortions are related to rape, the abortion lobby often holds out pregnancies like Anna’s as examples of why abortion is necessary.

“I don’t think [Anna] thought carrying her child as a punishment,” Darcie said. “Our culture needs to reframe this. These women need to be celebrated, they need to be supported. People need to come around and love on them and help them, provide them what they need to get through this and heal.

“We can’t forget the trauma these women have suffered at the hand of another person. These women are heroes.”