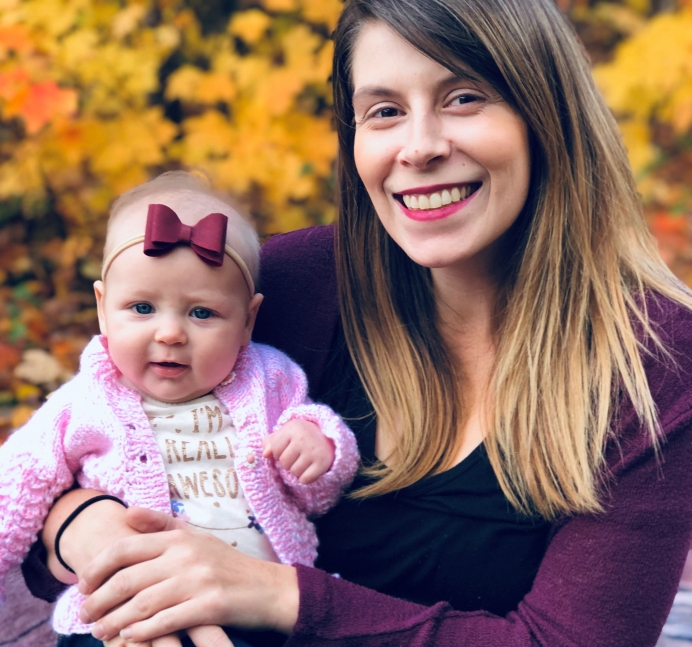 Abortion Pill Reversal gave this mom hope, now she wants other moms to have the same chance for joy

After falling into despair following the start of a chemical abortion last year, Jessica pursued abortion pill reversal, and she is now the mother to five-month-old-baby Arya, who brings joy to her life.

“I’m really happy that I was able to reverse the abortion and that she is part of my life,” she said of her baby girl. “I couldn’t imagine it any other way.”

Mindful of those who didn’t have this same chance, she is speaking up about her experience in hopes that others can learn about Abortion Pill Reversal.

“There are other women who didn’t have that option,” Jessica told Pregnancy Help News.

She had just begun her first year of nursing school when found out she was pregnant with her second child. Jessica’s three-year-old son had just been diagnosed with autism, and she’d also left her spouse, citing problems with drug and alcohol, and his mental and emotional abuse.

Jessica recalled discovering that she was pregnant, finding herself out of breath walking up the hill to her car after class, which was strange.

After running to the store, purchasing and taking three pregnancy tests, which all turned positive, she was then on her bathroom floor sobbing.

“I didn’t know what to think,” Jessica said. “I went back and forth from wanting to keep my baby, to trying to focus on the life I already struggled with at times.”

She thought about being a single mother, now with two children, her son’s diagnosis and her trying to finish school, all without support from her children’s father.

“It was really hard on me,” Jessica recalled.

After an ultrasound in October of last year confirmed she was six weeks pregnant, she continued to mull over her situation while discussing options with her doctor.

Jessica said she immediately began to cry after she took the abortion pill.

“I remember sitting in my car in the parking lot staring, not knowing what I had just done,” she said.

It was Thanksgiving weekend in Ontario, and she was driving to her mother’s house the following day, crying through the entire drive.

“I felt horrible,” Jessica stated. “How could I want to abort my beautiful baby? … The life that was growing inside of me…”

“I was so upset with my decision that I didn’t want to live anymore,” she told Pregnancy Help News. “Then I thought about my three-year-old son, and that I can’t not want to live because I have another child.”

Jessica continued to sob with regret after arriving at her mother’s home and talking with mom.

Her mother suggested that there might be some way to reverse the chemical abortion process, and Jessica began searching on the internet, coming across the website abortionpillreversal.com.

She spoke with a helpline consultant, who told her that a nurse would call her back.

The consultant was very supportive, Jessica said, reassuring her that she would do everything she could to help her.

The few minutes waiting for word on the next steps were the longest of her life, said Jessica, “I just kept thinking, “Please, I hope someone can help me, can help my beautiful baby.”

When the Abortion Pill Rescue Network nurse called her back, Jessica said she was so polite and helped reassure her that she was not alone in this situation.

“She gave me all the information that I needed and called local hospitals,” said Jessica, to determine whether they knew the APR protocol.

She estimates that it was about 30 hours after taking the abortion pill that she started her progesterone treatment.

The chemical abortion process consists of two pills; the first, mifepristone blocks the effects of progesterone, the natural hormone in a pregnant mother's body necessary for her pregnancy to thrive. The abortion drug causes the uterine lining to break down and the placenta to begin to fail, thus starving the baby of oxygen and nutrients.

The second chemical, misoprostol, taken one to two days later, completes the chemical abortion, by causing the mother to deliver her deceased baby.

The Abortion Pill Reversal protocol works by giving the mother extra progesterone up to 72 hours after she takes the first chemical abortion drug. The treatment has the best chance for success when begun within 24 hours.

Jessica was followed closely by doctors throughout her pregnancy and had numerous ultrasounds. She continued to worry about her daughter even after completing the progesterone treatment at 18 weeks, but carried her baby to full term, delivering her one day after her due date.

“My daughter Arya Alexandria is the most amazing gift,” Jessica beamed. “I call her my miracle baby.”

Arya was born perfectly healthy, she said, and is very happy, sleeping a lot, and getting along well with her son.

“I’m just really happy that this worked out,” Jessica told Pregnancy Help News. “She brings a lot of joy to my life and also to my son’s life.”

She said she’ll be forever grateful to have found the APR website and receive treatment as soon as she could.

Jessica hopes for more women to find help and support in these situations. And she believes everyone should be educated on the Abortion Pill Reversal process “because it truly is an amazing thing.”

Tweet This: Jessica believes everyone should be educated on the Abortion Pill Reversal process “because it truly is an amazing thing.”

“So many babies have been saved by this process, and by saving babies you could also be saving a mom,” she said.

“There are other options if you do take the abortion pill,” said Jessica. “That one option (APR) really changed my outlook on things. It gave me hope.”

Editor’s Note: Pregnancy Help News is a project of Heartbeat International, which manages the Abortion Pill Rescue Network, a 24/7-365 provider network of more than 800 clinicians that provide the APR protocol.