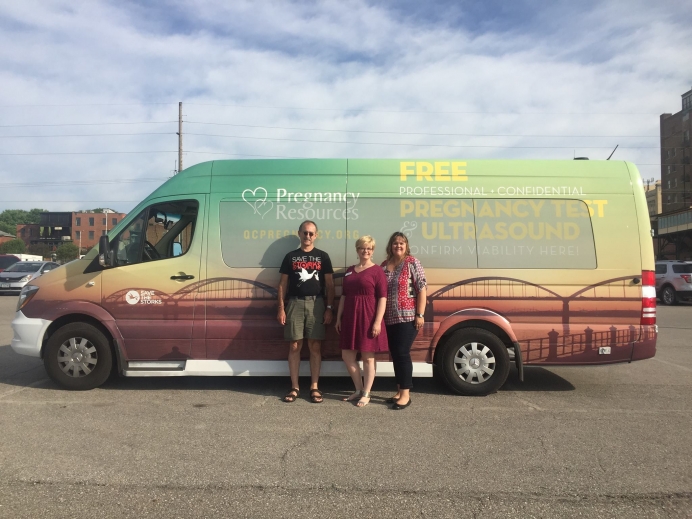 2-State Medical Clinic to Hit the Road with Mobile Unit

Situated in the northwest corner Illinois and the southeast corner of Iowa, Quad Cities Pregnancy Resources is one organization spread across two sites and, as it happens, two states.

In July 2016, the number of locations will increase dramatically—depending on the day of the week, that is—once the organization gets its mobile ultrasound unit on the road.

The group’s executive director, Susan Skoklund, says the mobile unit—nicknamed “The Hope Van”—will start out operating three days a week with a plan to move to five days a week in five different locations.

Slated for a ribbon-cutting ceremony July 15, Skoglund is projecting the new addition to help the 26-year-old organization increase its already impressive suite of services that delivered over 3,000 unique points of assistance in 2015.

“I have witnessed a steady increase in the amount of abortion-minded women and men seeking our services,” Skoglund, who has been at the organization’s helm since 2011, said. “We have also seen a rise in the involvement of dads and have even watched some take a stand for their unborn right in our center after seeing their baby on the ultrasound.”

Formed by a group of local Christians who were stirred to life-affirming action, Quad Cities Pregnancy Resources has added pregnancy testing and limited ultrasounds over the years, in addition to building into its post-abortion, fatherhood, parenting, material assistance and community referrals programs.

Last year, Quad Cities administered 905 pregnancy tests and 549 limited ultrasound tests, but Skoglund has had her sights set on an ultrasound-equipped mobile unit since she came on staff six years ago. As 2016 approached, she pitched the vision to her supporters, who have responded emphatically.

One church, for example, pulled together a $50,000 gift toward the project, which has been undertaken in partnership with Save the Storks—an organization that is closing in on 20 mobile ultrasound units on the road throughout the U.S.

As the fundraising project has gone forward, Skoglund has had the chance to introduce backers to a prototype of The Hope Van—a Mercedes Sprinter complete with extras like a WiFi hotspot, massage seats and leather seating. Not to mention all-new ultrasound equipment and STI testing capabilities.

“We have had the privilege of a Stork bus visiting us a couple of times and recently at our banquet,” Skoglund said, “Each time was an opportunity for our supporters to tour the bus and get a really good look at our hope for the future. By the end of last year, we were really campaigning our mobile unit goal to our faithful donors. God moved and inspired them to rally around our efforts and we began getting some big donation amounts.”

While the only abortion clinic in the immediate area shut down after 40 years of operation just a few years back, Skoglund and her team have located at least five regular stops they hope to eventually make once the van is up and running—including two that are on or near college campuses.

“We are so excited with God’s miraculous provision with Hope Van,” Skogland said. “[We’re excited to] serve our community and reach even more of the abortion-minded and vulnerable.”