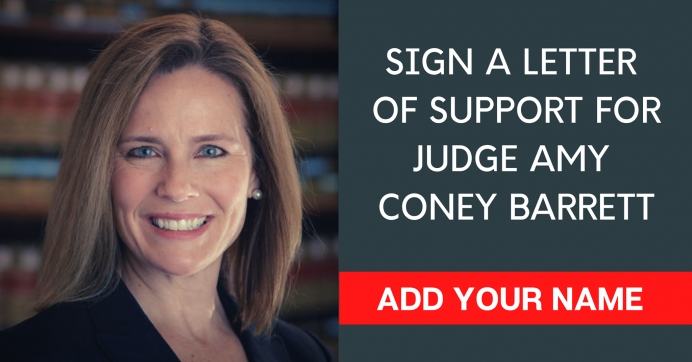 Signatures of support for Judge Amy Coney Barrett continue to flow into Heartbeat International as confirmation hearings convene before the Senate Judiciary Committee for her nomination to the U.S. Supreme Court.

Heartbeat International crafted a letter to Barrett that offers prayer, support and encouragement to help shield her with God’s protection during the confirmation process, which promises to be rigorous at best.

In its message to Barrett, Heartbeat International expresses gratitude for her extraordinary example of the authentic power held by women – that they can be highly accomplished professionals as well as mothers. Heartbeat also commends Barrett for working to lead her family with her spouse and to also uphold justice.

“Your nomination to the Supreme Court of the United States is an encouragement to us all,” the letter states. “Not only does your resume alone qualify you for this role, but you embody everything that each young person in our nation should strive to be. You are the example needed by our youth today.”

Tweet This: “Your nomination to SCOTUS is an encouragement to us all .. you are the example needed by our youth today” - Heartbeat Intl. to Judge ACB

The prayer in Heartbeat’s letter asks God’s protection of Barrett, “with the full armor to guard her and her family's lives against attack.”

Barrett's accomplished legal career achieved simultaneously with her motherhood have made her an icon with pro-life supporters, conservatives and faith and family advocates.

Her nomination has been contested by Democrats with the 2020 election imminent, the prospect for a third Trump appointee to the Court and fears on the left that appointing a justice that departs from the Ginsburg mold would put Roe v. Wade at risk.

Barrett, 48, has served as a judge on the U.S. Court of Appeals for the Seventh Circuit since 2017. Her confirmation to the federal appeal court made headlines for the treatment of Barrett exhibited by Sen. Dianne Feinstein (D-CA), who in grilling Barrett on her Catholic faith and values, inferred that Barrett’s being devout was a problem.

Feinstein had said to Barrett in the confirmation process that, “when you read your speeches, the conclusion one draws is that the dogma lives loudly within you. And that’s of concern.”

Barrett and her husband Jesse, also a lawyer, have seven children, two who were adopted children from Haiti and one child with special needs. The size of her family has been among the targets of negative attention, along with the family’s adoption of Haitian children.

If confirmed, Barrett will be the youngest justice and the first woman with school-age children to serve on the High Court. She has been lauded for her intellect, achievement and credentials, as well as a generous spirit.

Barrett’s having clerked for and been the protégé of the late Justice Antonin Scalia, along with her comments in support of interpreting the Constitution as written have heartened originalists.

Her Catholic faith has continued to be the target of scrutiny and disparagement since her SCOTUS nomination.

That fact, coupled with the 2017 display with Feinstein and the nasty, partisan handling of Justice Brett Kavanaugh confirmation process in 2018, have further fostered pro-life and Christian support for Barrett and her prospective Supreme Court appointment.

“We appreciate your consistent interpretation of the law and the values you hold,” Heartbeat’s letter to Barrett states.

“In the days ahead, we know well the attacks that will be made against you.,” it continues. “We are already seeing certain articles belittling your faith and your family. We admire the fact that you know the attacks will continue and accelerate and you still said yes — because that is what strong women do!”

The letter concludes, “We appreciate your acceptance of this nomination and are praying for you to be steeled with the full armor of God.”

As of press time, more than 4,000 signatures have been received for Heartbeat’s letter of support to and prayer for Judge Barrett, with more continuing to come in.

To add your name to the letter, click HERE.