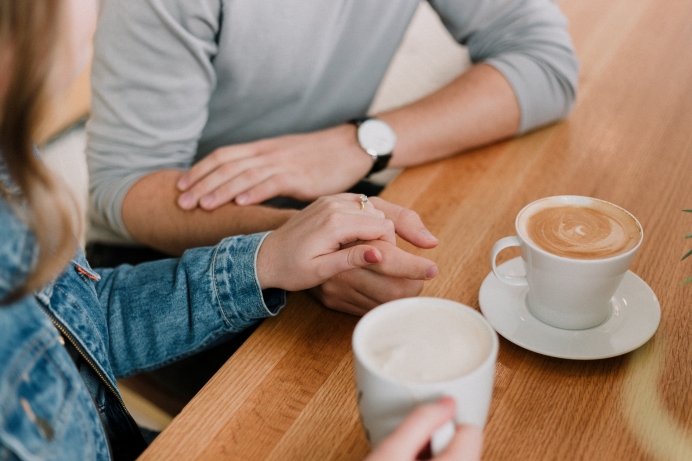 It was a warm day in late August. I was helping others from our pregnancy help center set up a table at the welcome fair which our local state college hosts each year for incoming freshmen. As I arranged brochures, fetal models, and candy, I noticed something interesting.

On the other side of the path, Planned Parenthood was setting up a table, too.

At first, the placement of two entities with such vastly different philosophies seemed super awkward. But then I sensed the Holy Spirit prompting me to cross the divide and serve the women at that table.

I introduced myself to “Stephanie,” a friendly woman who, I found out, has three kids. I offered her some water, then fetched it when she accepted the offer.

We talked a little about how each of us found ourselves in a job where we were trying to help other women (though, of course, in very different ways). We talked about our kids.

The following fall, Stephanie was at the Planned Parenthood booth again, and we chatted again. This time, she was joined by another woman, “Tina,” who would not speak to me or even make eye contact no matter how friendly I tried to be.

Tina clearly saw me as the enemy.

According to Meriam-Webster, an enemy is “one who is antagonistic to another, especially, one seeking to injure, overthrow, or confound an opponent.”

Going by that definition, pro-life Christians should not behave as enemies toward anyone.

We are not against people. We do not seek to hurt or humiliate them. We do not try to stump them in arguments just to prove they are wrong and we are right.

No matter what great wrong they may have done, we may not treat them poorly.

I read a few recent posts on social media by a man who claims to be a Christian, yet openly vilified another man who has done wicked things. In his zeal for justice to be brought to bear against this individual, this writer used language which was crude and dehumanizing.

Such a response to wrongdoing solves exactly nothing. It only makes matters worse.

Especially in the world of pregnancy help centers, where all human life is highly valued and great sensitivity is required, we cannot give in to the temptation of participating in fruitless arguments or worldly vitriol.

Doing so would not only jeopardize our ability to truly help people—it would also dishonor the name of Christ.

Truth is, every human being is an image-bearer of God, and He doesn’t want a single one to perish (2 Peter 3:9).

Not the hardened criminal on death row. Not the serial rapist. Not even Kermit Gosnell.

No one is beyond the reach of God’s grace—and even if they never respond to Him in repentance and faith, it’s not our job to take vengeance, even with our words (Romans 12:19).

Jesus said, “You have heard that it was said, Love your neighbor and hate your enemy. But I tell you, love your enemies and pray for those who persecute you, so that you may be children of your Father in heaven.” –Matthew 5:43-45

If we want to be like Jesus, who is the perfect image of our Father in heaven, then we must love those who oppose what we believe and what we do. As representatives of Jesus, it is our responsibility and privilege to show love even when we are rebuffed or attacked.

My heart was warmed in seeing pro-life leaders reaching out on social media to Dr. Leanna Wen when she shared about the sorrow of her miscarriage, inviting her to look at things differently, assuring her that we see her as a human being worthy of love and not an enemy.

That kind of response demonstrates what we are about.

Although opponents like to call us “anti-choice,” we’re not really an “anti” group of people.

Tweet This: Although opponents like to call us “anti-choice,” we’re not really an “anti” group of people. #ProLife

Yes, we are for the preborn, the most vulnerable among us who need our protection. We are also for women who are distressed by unplanned pregnancies and need support and hope.

We are for the fathers who have no say in whether their babies live or die and desperately need encouragement. We are for women and men who suffer the fallout of an abortion decision.

We are for the employees of abortion providers, hoping and praying that, one by one, they’ll see things in a different light and live into a new story, as Abby Johnson and many others have.

We are for people who fight for abortion rights, vandalize our properties, and try to smear us with social media campaigns.

We disagree with them, but we are for them as persons.

We’re pro-life, pro-human, and pro-compassion. We’re under a beautiful mandate to love our enemies.

So let’s cross the divide to serve those who oppose us.

Isn’t that what Jesus did for us?