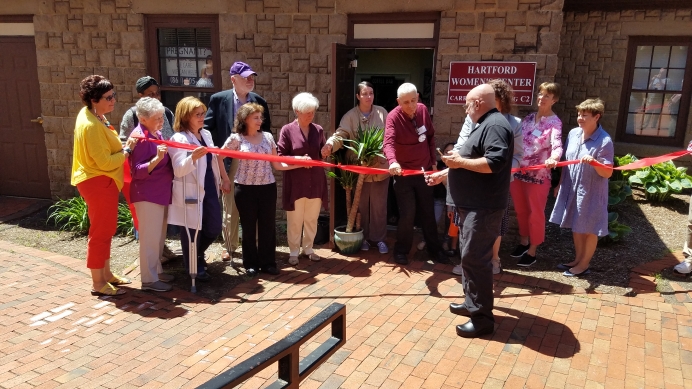 The ribbon-cutting for a new life-saving center next door to a New England abortion business. Photo Courtesy: St. Gerard's Center for Life

At the outset of the 1950 Battle of Frozen Chosin, where he and his men were out-numbered 67,000 to 30,000 on frigid enemy territory, Lieut. Gen. Lewis B. “Chesty” Puller delivered one of the most enduring lines in U.S. military history.

“We’ve been looking for the enemy for some time now,” Puller—whose courage in the battle would earn him his fifth Navy Cross—told his troops. “We’ve finally found him. We’re surrounded. That simplifies things.”

That feeling of being surrounded, yet simplified is one the team at Hartford (Conn.) Women’s Center is going to have to get used to in a hurry, following a May 20 ribbon cutting ceremony at its new location.

While the situation in which pro-life, ultrasound-equipped center finds itself isn’t military in nature, it certainly carries life-and-death ramifications—a reality that grips Caron Sheffield, who nearly resorted to abortion 24 years ago.

“The first time we went to see the building, I just knew it was the answer to our prayer,” Sheffield, one of 20 volunteers with Hartford Women’s Center, said. “What excites me most is that at the last minute, when a woman is walking into an abortion clinic, she can make a choice for life. If you come here you have resources, you can give a child life; if you go there, you’re going to regret it the rest of your life.”

Snatching Life from the Jaws of Death

Started in 2006, St. Gerard’s Center for Life—the parent organization of Hartford Women’s Center—grew out of a sidewalk ministry made up primarily of students at a local Catholic seminary.

The seminarians began praying weekly outside of Hartford GYN and eventually partnered with Helpers of God’s Precious Infants, a group formed by Msgr. Phillip Reilly of Brooklyn, New York.

From 2006 to 2013, St. Gerard’s—named for the patron saint of expectant mothers—served women across a busy intersection from the abortion clinic. They relocated to another office two miles away in late 2013, but found themselves too far away from the women they were hoping to reach.

“I started to scout around for locations,” Leticia Velasquez, the center’s volunteer director, said. “We saw real estate signs up and I said, ‘Why haven’t we bought or rented one of these buildings 20 feet from the clinic?’”

Tweet This: #prolife center to save lives next to #Connecticut #abortion biz @CauseofourJoy

As it turned out, there wasn’t a good enough answer to stop Velasquez and her team from opening shop just a wall away from an abortion clinic that claims the lives of as many as 60 preborn children every day.

They were able to pay cash for the office, closing Nov. 28, 2016—a month to the day prior to the Feast of the Holy Innocents, which commemorates the children who were slaughtered by King Herod after the birth of Jesus.

Death Fighting for its Life

It wasn’t long after the purchase date—February 1—that NARAL moved its offices to the building’s fourth floor. That move came less than two weeks after a NARAL-backed bill was introduced into the legislature as an effort to stifle life-affirming free speech by St. Gerard and other pregnancy centers throughout the state.

While the legislation has failed to move forward, the pregnancy center’s new neighbors have done their best to send the message that St. Gerard’s is an unwelcomed addition to the area.

Shortly after they closed on the property, Velasquez heard allegations that she had placed a sign in the window claiming that St. Gerard’s new location provided abortions.

Another immediate complaint was in regards to the title, “Hartford Women’s Center,” which was approved by the city but runs afoul of the abortion lobby’s demand that pregnancy centers include a reference to life-saving services within its own name.

Tellingly, the word “abortion” is nowhere to be found in Hartford GYN Center’s name, even though one of its mottos is, “Abortion: One Hundred Percent of What We Do.”

“They think they have a position of being women’s champions,” Velasquez said. “It’s sad how deceived some of them are, but the truth is twisted into, ‘It’s me or the baby.’ We have to make her understand that life goes on. Life will be different, but life goes on with the baby and your goals are still reachable.”

Right to Life, Left to Death

The move next door to an abortion clinic makes St. Gerard’s the latest in a flurry of pro-life centers to do so, following similar efforts in Mississippi, Northern California, Baltimore, Southern California, New Orleans and Florida.

In St. Gerard’s case, it will also continue to serve women at its office two miles down the road, providing material support and parenting help to women through the early years of motherhood.

Holding onto two locations will enable the all-volunteer team—which includes three nurses and a doctor—to reach a woman in a moment of decision, then connect her to long-term care.

“We hope to establish relationships,” Velasquez, who resisted pressure to abort her youngest child after she was diagnosed with Down syndrome, said. “We’re here to support a woman throughout her pregnancy so that if she’s getting negative feedback, we can support her.”

While she expects to keep getting grief from the abortion business next door and the abortion lobbyist upstairs, Velasquez said she’s doing her best to be a good neighbor in spite of the threats and accusations.

It’s the client and her preborn child that come first, after all, not appeasing an industry built on preying upon both.

Tweet This: "We're catching flak, so we must be over the target." @CauseofourJoy #prolife group saving lives next to #abortion mill