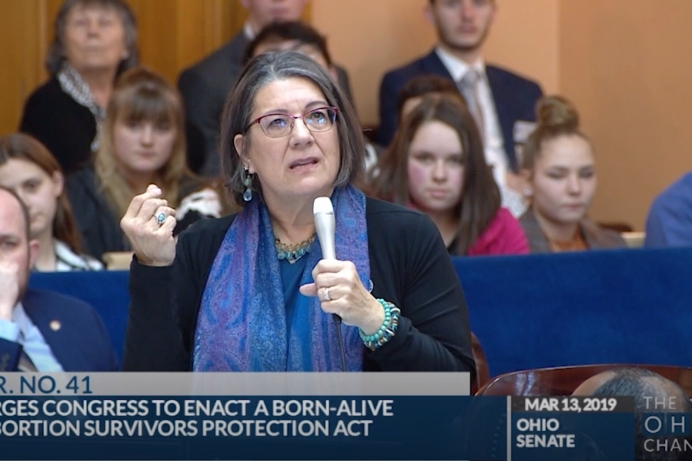 Democratic State Senator Nickie Antonio tells the Ohio Senate, "We should do everything we can," when discussing a federal bill which would protect abortion survivors once they are born.

Last week, an unexpected thing happened in the Ohio and New Mexico state senates: Democrats joined their Republican colleagues in taking a stand for pro-life policies.

The federal legislation (which would ensure that babies who are born after failed abortion attempts are given proper medical care) was defeated by pro-abortion Democrats three weeks ago in the U.S. Senate, leaving many in the pro-life community angry, heartbroken, and dejected.

Sponsored by pro-life Senator Ben Sasse (R-Nebraska), the Born-Alive Abortion Survivors Protection Act materialized after Virginia Governor Ralph Northam made alarming comments defending a bill that would legalize abortion through active labor and suggested non-treatment for abortion survivors—a seeming defense of infanticide. Those comments were made just after New York passed a law stripping away all protections from unborn babies and right as other states were mulling similarly aggressive measures.

Until last Thursday, New Mexico was one of those states hoping to follow New York's perilous path. On March 14, eight Democratic senators joined all 16 Republican senators in blocking the repeal of a now-dormant 1969 law which made it a felony to perform an abortion, with exceptions for rape, birth defects and serious threats to a woman’s health.

One New Mexico Democrat, Sen. Gabriel Ramos, cited his Catholic faith before voting against the bill.

“This is one of the toughest decisions any of us will ever have to make,” he said ahead of the vote. “I stand unified against legislation that weakens the defense of life and threatens the dignity of the human being.”

At a time when the Democratic Party is showing zero tolerance for pro-life views and the pro-life/pro-choice divide seems to be widening, last week’s votes in the Ohio and Mexico senates came as a surprise.

Just days before each of the senate votes, Democrats seemed determined to follow the pro-abortion party-line. The New Mexico House had already approved the repeal of the 1969 law, and Democratic Gov. Michelle Lujan Grisham had vowed to sign the bill.

Back in Ohio, the day before the Senate vote, three pro-choice Democrats attempted to block the resolution from passing out of the health committee but failed. By the time the whole Ohio Senate took up the resolution on Wednesday, those three senators changed their votes—but not eagerly.

“This resolution is troubling because we know there are laws on the books that protect a live born baby,” said Ohio State Sen. Nickie Antonio, one of the Democratic committee members. Then, after explaining why Ohio’s continuous pursuit of pro-life legislation gives her “a whole lot of heartburn,” Antonio came to her conclusion on the resolution at hand.

“Now having said all that,” she said, her tone changing. “When a baby’s born...a baby’s born. And we should do everything we can,” she concluded tearfully.

Antonio, along with all of her fellow Democratic and Republican senators, approved the resolution, drawing applause from the audience in the gallery.

While this vote could, of course, be attributed to the Democrats’ political calculus (voting for infanticide wouldn’t exactly go over well with voters), it is a small relief to see the whole Democratic caucus of one state senate draw a line against the worst example of pro-abortion extremism in recent history. Could they do better? Most certainly.

Not long after the Abortion Survivors vote was taken Wednesday afternoon, the Ohio Senate considered another pro-life measure, this time the Heartbeat Bill, which would protect an unborn child from abortion when a fetal heartbeat can be detected.

That bill passed, but this time the vote was divided: 13 senators (including four Republicans) opposed the legislation. As Sen. Antonio made clear during her floor speech: Ohio Senate Democrats still have no interest in protecting the lives of babies before they are born.

But there is a light in last week’s Abortion Survivors vote.

But we shouldn’t stop there.

Whether by supporting America’s 2,750-plus pregnancy help centers, enacting legal protections for the unborn, or striving to change the culture to a life-affirming one, there is a myriad of ways in which we can respond to the challenging circumstances surrounding an unexpected pregnancy.

One specific and astounding example of “doing everything we can” to protect the unborn comes from another scene last Wednesday morning at Ohio Right to Life’s Annual Pro-life Legislative Day in Downtown Columbus. There, just hours before the Senate session, Cindi Boston, Vice President of Heartbeat International, presented her organization’s life-saving Abortion Pill Reversal protocol, a treatment which she said has led to the births of more than 500 babies since 2007.

This regimen, which has a success rate of about 68 percent, pulls unborn children (along with their mothers) back from the brink of destruction by providing a woman with progesterone to counteract the chemical abortion pill, mifepristone.

Amazingly, this protocol is creating hundreds more “abortion survivors” well before birth. With a growing network of more than 500 medical providers, it’s saving babies like Giselle, Zeke, Gabriel, and Tig within the first trimester of pregnancy—the same babies that laws like the Heartbeat Bill would protect.

The gulf might be widening between the pro-life community and abortion supporters right now, but if last week’s Ohio and New Mexico votes tell us anything, humanizing the unborn and urging our legislators to “do everything they can” may not be an entirely lost cause.