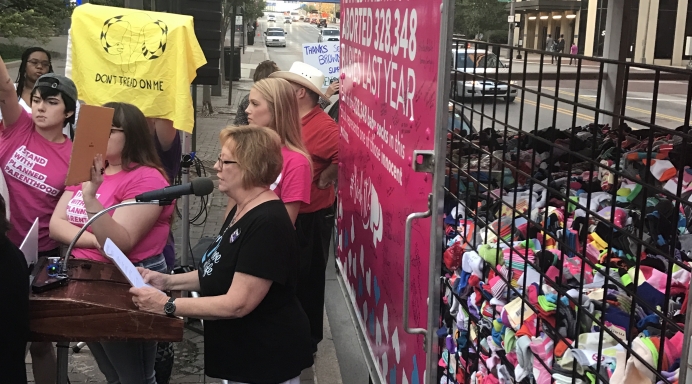 In their never-ending quest to normalize and de-stigmatize abortion, leftists may want to do a bit more listening than their fellow combatants, who spent the better part of 10 minutes trying to drown out a woman sharing her own abortion story Wednesday night in Columbus, Ohio.
After all, there just may be better ways to empower women than shrieking over one who's trying to tell her most intimate life experience.
The woman, who introduced herself as “Christy,” was addressing around 60 pro-life advocates at Students for Life rally outside the state capitol, telling the crowd that she had resorted to abortion at age 16 when her 21-year-old boyfriend took her to a Planned Parenthood in Canton, Ohio.
Christy—who had become so depressed in the years following her abortion that she contemplated suicide—was just starting to tell her story when a group of about a dozen abortion backers started chanting, “My Body, My Choice.”
As Christy told her heartbreaking story, the abortion fans crowded in to block her from the audience, all the while chanting and trying to keep Christy from telling the crowd about her abortion.
“While we obviously disagree vehemently with those who advocate for abortion, Students for Life prides itself on having a civil discourse with those that disagree with us," Students for Life president Kristan Hawkins said. "In fact, we do this everyday on college campuses across the nationwide. Last night, the pro-abortion lobby decided that instead of civil discourse they would choose to disrupt and interrupt. They have no intention of hearing the opinions of those that disagree with them. I am proud of the way that our students, supporters, and speakers handled themselves and am looking forward to working with them towards defunding Planned Parenthood.”

On the second stop of a six-city #Sockit2PP Truck Tour that started Tuesday and ends Saturday, Sept. 23 when Students for Life delivers a truckload of 328,348 pairs of baby socks—one for each baby Planned Parenthood aborts each year—to lawmakers in Washington, D.C.
Wednesday night’s lineup included Hawkins, 40 Days for Life co-founder David Bereit, Life Issues Institute president Brad Mattes and Heartbeat International vice president Cindi Boston, along with local leaders including Ohio Right to Life director of legislative affairs Jessica Koehler and Cindy Violet—the executive director of Pregnancy Resources of Delaware County just north of Columbus.
Calling upon members of congress to end taxpayer funding of the nation’s largest abortion provider and redirect the more than $500 million to federally qualified health centers, the tour is also meant to highlight a better way forward than abortion for women facing an unexpected pregnancy.
The fact that abortion supporters on hand were actively trying to silence a woman telling her abortion story was indicative of a deeply intolerant attitude toward abortion alternatives, said Boston—whose organization serves a worldwide network of 2,200 locally funded pregnancy help locations.
“It was so sad that Christy wasn’t given the basic courtesy to tell her own story,” Boston, a former pregnancy center director, said. “This is the most meaningful story in her whole life, and they would not let her tell it without interruption.”
[Click here to subscribe to Pregnancy Help News!]
Just the second speaker, following Hawkins, Christy was only a sentence into telling her story when abortion advocates started talking over her. Less than a minute later, the “My Body, My Choice” chant had begun, with the abortion supporters sloganeering through her testimony.
At one point, Christy had to stop and regroup, but she followed through to the end of her story, telling the crowd how she had found life and forgiveness by faith in Jesus Christ when she was on the brink of suicide.
Christy also told the crowd that she’d experienced a major turning point in her post-abortive journey thanks to Rachel’s Vineyard and the Silent No More awareness campaign, ending her remarks on a triumphant note.
“Planned Parenthood is hoping that women like me will remain silent, that we will just suck it up, shut up and remain in anger and denial,” Christy said. “We share our stories because our experience proves that Planned Parenthood cannot stand behind their false rhetoric. They will not silence us, and they will not keep us in anger and denial, lost in our physical, emotional and spiritual pain.
“We prove that women do not need the misery of abortion. We do not need the betrayal, and Planned Parenthood certainly does not deserve any more of our money.”
Tagged under
Tweet