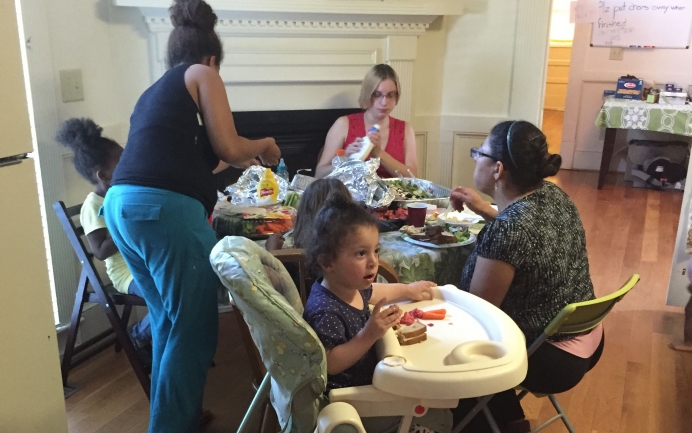 Not a day goes by that the phone at Mary’s Shelter doesn’t ring with someone calling about a woman in a crisis pregnancy situation who needs help or a place to stay.

That need is causing the founders of the series of maternity homes for women and their children in downtown Fredericksburg, Va., to expand and include a respite program that provides temporary housing for women in emergency situations.

Mary’s Shelter started in 2006 by a group of friends who were praying about the need to help these women, said Kathleen Wilson, executive director. They took in their first clients before they had any funding or had set up non-profit status, and have since expanded from a one-room apartment to five houses that can hold 17 families.

“We raised enough money within a week to help the first woman, and then we decided we didn’t want to wait around until we had enough raised to start a whole women’s shelter,” Wilson said. “We’ve started small and grown from there.”

Mary’s Shelter provides women a place to live for up to three years, access to job training and education, counseling and tools to help enrich their lives and the lives of their family. More than 150 women have gone through their program, and countless more have been given donations or temporary housing in an emergency situation.

“One of the greatest needs is women calling who we do not have room for, especially those in danger or in abusive situations,” Wilson said. “If we can shelter them for four or five days in a hotel, we will have a better chance of not losing their child to abortion. We see where it really can come down to housing and someone showing care that will make the difference between life and death.”

This year, the goal is to raise enough money at their annual fundraiser to provide this assistance for about four women a month, Wilson said.

Mary’s Shelter has already been doing everything it can, including putting women up in cots in the office or hotels if they had the money, Wilson said, but they hope to work the respite program into the budget so they can help more women.

“Not everyone’ situation requires them to move into a maternity home,” Wilson said. “If a woman is in a violent or unsafe home, being faced with being pregnant may be the first time they feel protective enough to leave. Not everyone needs to be long-term, but they may need a place to go at first.”

Mary’s Shelter is volunteer-run and community effort that allows people to live pro-life, not just be pro-life, said Julian Malcolm, president of the organization’s board of directors.

“We’re getting to live and walk with people who are making tough, brave decisions for life,” Malcolm said. “You want being pro-life to be more than just a novelty. You really want pro-life involvement in the community.”

That’s how Mary’s Shelter operates. The women are held accountable to learn or make changes necessary to live on their own, Wilson said. Volunteer house mothers check on the families, doctors, counselors and speakers from the community donate their time, college students babysit the children so their mothers can attend classes and learn cooking, cleaning and other life skills.

“People just fall out of Heaven everywhere for the needs we have,” Wilson said. “There’s a volunteer for just about everything. Watching the community come together is really sort of an amazing thing. These are all people with lives, work and lots of kids of their own.”

Not all the women who stay in Mary’s Shelter have successfully graduated, Wilson says, but a good number have gone to careers, their own apartments and marriages.

For Wilson, the most rewarding aspect of Mary’s Shelter is seeing the babies born.

“When you have these women who come through that are willing to really step up to the plate and learn how to do everything—to see them flourish in the situations where they’re appreciating family dinners and learning how to knit. It’s very rewarding.”

From what he has experienced with Mary’s Shelter, Malcolm says the template is in place, and he would like to help other communities set up a network of maternity houses, too.

“I wish every community had something like this,” Malcolm said. “It’s very encouraging to have this be a part of who we are in the community.”