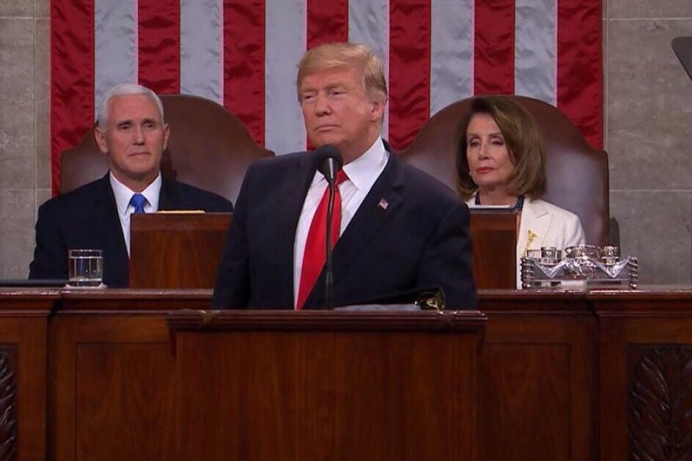 Trump in SOTU: "All Children—Born and Unborn—Are Made in the Holy Image of God."

Last night, President Trump gave a resoundingly pro-life State of the Union address, acknowledging the value of every pre-born child:

There could be no greater contrast to the beautiful image of a mother holding her infant child than the chilling displays our nation saw in recent days.

Lawmakers in New York cheered with delight upon the passage of legislation that would allow a baby to be ripped from the mother’s womb moments before birth. These are living, feeling, beautiful babies who will never get the chance to share their love and dreams with the world.

And then, we had the case of the governor of Virginia where he stated he would execute a baby after birth. To defend the dignity of every person, I am asking Congress to pass legislation to prohibit the late-term abortion of children who can feel pain in the mother’s womb.

Let us work together to build a culture that cherishes innocent life.

And let us reaffirm a fundamental truth—all children—born and unborn—are made in the holy image of God.

Stating that each and every person is a baby made in the “holy image of God,” the President received cheers and a standing ovation for his pro-life remarks. Unfortunately, those cheers were limited to the majority of the Republicans in Congress. The “women in white”—a Democratic section that was supposedly dedicated to women’s empowerment—failed to show even the slightest approval for the President’s remarks.

Tweet This: "All children—born and unborn—are made in the holy image of God." @realDonaldTrump @sonnyjoynelson #SOTU

President Trump has advanced a slate of pro-life policies since taking office, including reinstating the Mexico City Policy. Being the first President to speak via live video at the March for Life in 2018, Trump followed his inaugural appearance with a 2019 vow to never sign any legislation that did not protect life in the womb. Vice President Pence, one of the most outspokenly pro-life advocates, met with women from Heartbeat International who chose life after facing unplanned pregnancies, ahead of this year’s March for Life.