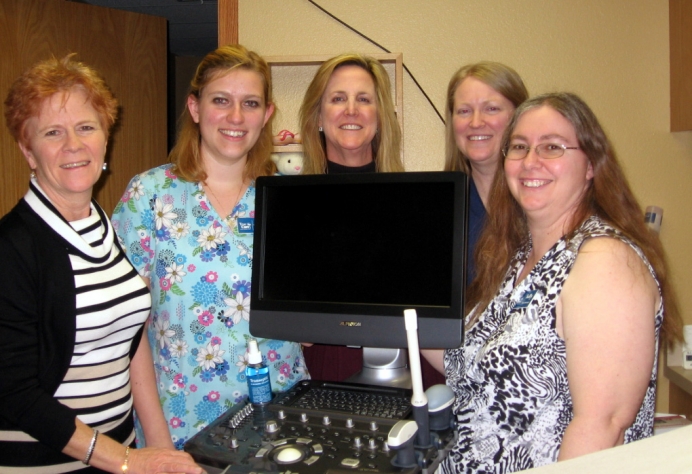 Ultrasound imaging has been part of the medical field for many decades, and it's the most widely used medical imaging method for viewing a woman’s unborn during her pregnancy, according to the FDA.

With 2D imagery, fetal heart rate has been seen as early as five weeks three days. 3D imaging allows the visualization of some facial features and possibly other parts of the unborn’s body such as fingers and toes. Automated 3D came into use about the mid-1980s but is still not widely used.

However, some pregnancy medical centers (PMCs) are implementing the technology to give their patients additional fetal development information.

The three staff nurses were trained on the new machine and its 3D capability by Connie Ambrecht and Sandra Miller from Equip Leaders Now (Connie is also part of Sonography Now – both women travel the country training medical professionals on ultrasound).

The True Care nurses saw a significant difference between the new Alpinion EC7 machine and the five-year-old Accuson X150 machine.

“Even in 2D (on the Alpinion) you see clearer images,” said Sally Heyer, True Care's Nurse Manager. “It's fun to view the images in 3D.  I love seeing what the new machine can do.”

“It's another tool in our toolbox to help women with their decision, making it (the pregnancy) real for them,” said Terry Winship, CEO of True Care.

The nurses practiced on several pregnant models before using the machine on patients. One of the models, about 16 weeks along, was awed by what she and her husband saw on the ultrasound screen.

“It's amazing,” she stated. “We were able to see the baby's face and could envision its personality. No words can really describe how I felt.

“I think this is a great tool for both pregnant women and for the Center,” she added. “It helps make the pregnancy a reality, especially for those women who are unsure (as to what decision they will make).”

Her husband described the experience as “surreal,” agreeing that 3D technology makes the pregnancy “more real.”

Sally noted how seeing the 3D ultrasound affected the models, and she anticipates that will be the case with women who are undecided or abortion-minded.

“Seeing the 3D image emotionally affected them more,” she said. “They can see the outline of the baby's face and its facial features better (than in 2D). I hope (by seeing the image) the abortion-minded women will connect with the little person within them more.

“Based on the reaction of the training models, I think we'll see some amazing reactions from our patients,” she added.

Terry agreed. “I hope our target patients will relate even better to the 3D images and that this will help more of them choose life,” she said.

There are pros and cons to using 3D ultrasound, Connie said. Among the positive reasons for using the technology is the reality of the pregnancy voiced by the model and her husband.

“This gives another level of realism for patients,” said Connie.

For Terry and her team, the technology speaks to relevance, one of True Care's core values.  One survey shows that women who have had abortions wish they would have been given  more information on fetal development before the procedure was done.

“From a life-affirming perspective, we're always talking about fetal development,” she said. “This gives us an opportunity to take that a step further.”

Less than 50 pregnancy centers in the country are currently using 3D imaging, Connie added. Not all doctors use the technology either so a center that does “might be the only one in town,” she said.

“The non-entertainment format is important for pregnancy medical centers to market their message,” said Connie. “3D is an appropriate medical component to the exam.”

Some of the cons include the baby needing to be a certain position “to get a good 3D image,” and the mother being too early in her pregnancy to get an optimal image, Connie explained.

“Patients have stated the image looks eerie when it (3D ultrasound) has been done early in the pregnancy,” she said.

Additionally, more time is needed for nurses to hone their skills.

“The nurses need experience to know at what stage of development 3D can be most effective, when it’s optimal to use,” Terry said.

However, Amber Zimmer, a True Care staff nurse, found the machine “simple to use and understand.”

“It takes a certain level of skill for this type of scan (but) nurses are scanning more, and over time they get more experience,” Connie stated. “After years of scanning, I still find 3D imaging to be a nice addition to our scanning tools.”

There are many reasons for an increasing interest among PMCs to use ultrasound and to move into 3D, Connie said.

“Donors are more educated, and centers have matured so they message it better to their communities,” she said. “There is a greater need for ultrasound because pregnancy centers are better accepted in communities and are seeing more patients. Also, more patients are thinking about termination later in their pregnancies. 3D gives another level of realism for the patient.”

“Images make it (the pregnancy) real, especially the facial structure; that can make a huge impact on abortion-minded women,” she said.

That is the hope of Terry, her staff, and those in the pro-life movement.

“This gives opportunity for more lives to be saved,” Terry stated.

True Care obtained the new ultrasound machine thanks to a partnership with the Knights of Columbus, an organization with a pro-life passion.

“Technology has changed over the past five years,” Terry stated. “We needed a new ultrasound machine anyway” since the Accuson X150 had become “old technology.”

“We established a relationship with the Knights and fundraising began in the fall (of 2014),” she added.

Her advice for other centers considering 3D imaging?

“The funding you raise for ultrasound is the easiest money you will ever raise,” Terry said. “Use a service such as Equip Leaders Now before choosing a machine; they know what's optimal and best for the pregnancy center setting.”

“If you have a need, let the Knights know!” she said.