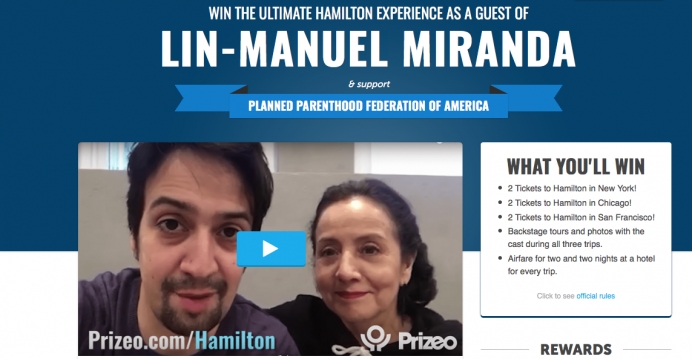 The Hamilton Planned Parenthood Fundraiser is No Joke... Or is it?

Over Christmas, I saw a couple of “promoted posts” from the creator of the hit Broadway play, Hamilton. Apparently, Lin-Manuel Miranda wants to give away free tickets to the show he wrote and starred in for so long, to those who donate to . . . Planned Parenthood.

Yep, that’s the deal. The more you donate to Planned Parenthood, the more chances you earn to win a trip for two to “all three cities next year to see all three productions (of Hamilton) AND you’ll get back-stage meet-ups with the cast.” Isn’t that just adorbs?

There is humor here, when we understand why Miranda is so enamored with the abortion giant.

You see, Miranda’s mother is on the board of directors of Planned Parenthood’s Action Fund, its political and lobbying machine.

I’m not a stand-up comedian, but this is worth at least a chuckle, right? This actor/writer/producer wants us to send money to a group which is solely about promoting abortion . . . wait for it . . . so he can honor his mother who chose life for him? Can anyone say, “irony?”

I’m not denying Mr. Miranda is a creative genius; apparently he is. While I haven’t seen Hamilton (and after this, don’t bet on me buying a ticket), audiences are going crazy over the play. My daughter heard some of the soundtrack however, and was stunned by the language—but I digress. I guess one can be creative and have a potty-mouth. But, I don’t have to like it.

In a sense, we must tip our cap to the guy. He came up with a fundraising campaign to make Planned Parenthood look acceptable in the middle of a PR disaster (thank you, David Daleiden and the Center for Medical Progress).

Planned Parenthood is apparently pulling in tons of cash through the contest, which means more champagne and caviar for Cecile Richards and the gang—and for those politicians they love to wine and dine.

Tweet This: #Hamilton ain't gonna happen every year. Gov't $ is about to dry up for #PPAct @KirkWalden #prolife

Recently, Planned Parenthood lost $4.2 million in government funding for its Medicaid scheme in Texas. The organization is pleading with courts to save its bacon, but sooner or later, PP-friendly judges will give way to the Supreme Court—a venue which soon may not be friendly to abortion providers begging for government money.

Without government funding, it will take plenty of Hamiltons (that’s a play on words there, a free pun for astute readers) to keep Planned Parenthood afloat.

Meanwhile, Pregnancy Help Organizations can look for increases in funding as the economy appears poised for a rebound and Christians across the country see hope on the pro-life front.

As the Hamilton contest wraps up (just 6 more days, abortion fans!), no doubt Lin-Manuel Miranda is proud of his contribution to what he calls a “beacon of hope” for women. To him, this is no joke, but a cause in which he believes.

I get Miranda’s passion. But in the words of Alexander Hamilton, “I think the first duty of society is justice.” Though it is a long time in coming, it appears Planned Parenthood could finally receive the justice it deserves. And that’s no joke, either.