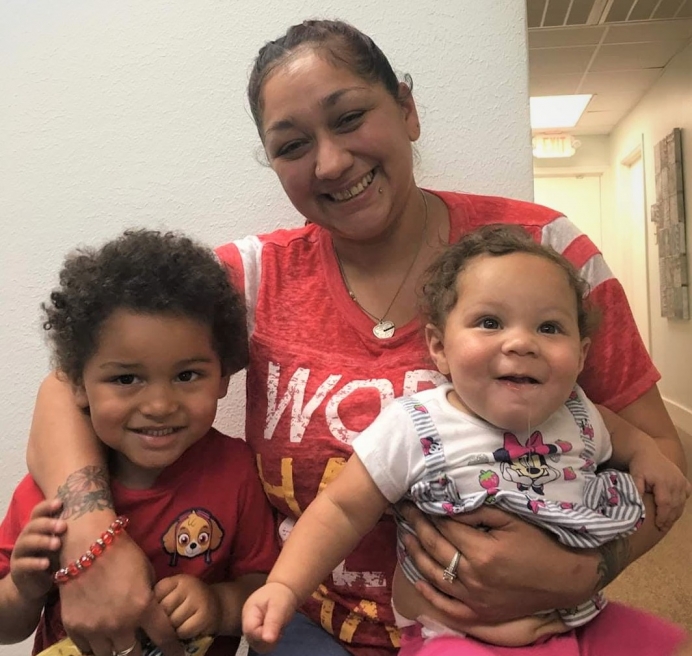 The Pregnancy Help Center of Galveston helped this mom in the aftermath of losing her baby daughter, and the Center seeks to serve other moms experiencing pregnancy and infant loss

For the first five months following the death of her baby daughter A'lena, Susann had been visiting the grave-site of her late child without a grave marker. After seeing a picture on Facebook and noticing the absence of a headstone, a friend, Jessica, called Susann to check in. She learned that Susann had already picked out a grave marker for her baby; she just needed funds to cover the remaining cost.

Hoping to help Susann, Jessica contacted a local organization that meant a lot to them both; the Pregnancy Help Center of Galveston.

The pregnancy center rose to the occasion and within just a few days, they had raised enough money to pay for the headstone. Susann was struck by the generosity of her community.

Susann first came to the center in the fall of 2018 when she was pregnant with her twin girls.

She was enrolled in the center’s H.O.P.E program, a 16-week series of free classes on topics such as childbirth, newborn care, breastfeeding and postpartum care. By partaking in the classes and graduating from each of the program’s three phases, clients earn free material resources and connect to a local community of mothers who are going through similar life experiences.

That’s how Susann and her friend, Jessica, met. These sorts of friendships are just what the pregnancy center hopes are forged through their classes.

“It’s not an unintended consequence because we’re very intentional about having the class in the center rather than just online or something like that,” Garza told Pregnancy Help News. “But it’s a really special, extra, added benefit that the clients get from being in class with each other.”

Other clients who have enrolled in the program have become roommates, and one client helps another with babysitting.

“They journey alongside each other and it really ends up being another thing that helps them to have community and not be alone during the experience,” Garza said.

Susann gave birth to her twins, A’lena and A'mina, at 34 weeks in December of that year. When she lost A’lena this past May, the twins were just five months old.

Several months after the tragedy, Susann was still trying to pull funds together for the cost of a grave marker.

By the time Jessica called the center informing the team of her friend’s situation, the Pregnancy Help Center was already in the midst of developing a ministry to serve women experiencing pregnancy and infant loss.

Joy and courage amidst heartbreak

Julie Johnson, the center’s director, invited Garza to work with Susann. During their first meeting, Garza quickly saw how much Susann loved her children.

“Susann has been really joyful and courageous and honest in sharing her story,” Garza said, explaining how hard Susann has worked to raise awareness about infant mortality on their small island. Baby A’lena was now known as Galveston’s “Angel Baby.”

“She’s just a really beautiful and loving presence with her kids,” Garza said. “When I called her to tell her that we raised the money, she broke down into tears and was just so grateful.”

A day later, Susann held a balloon release in memory of A’lena at her daughter’s graveside. She even invited Garza and Johnson to attend, a moving affirmation of the center’s goal to support women across the spectrum of pregnancy, childbirth, and loss.

From the outset, the pairing of Susann with Garza seemed perfect. Indeed, Garza was familiar with loss, as it was her own recent miscarriage that led her to start serving at the center earlier this year.

Before that moment, Garza had no idea there was a pregnancy center on the island. That’s because until last spring, there wasn’t one.

Last summer, the Pregnancy Help Center of Galveston opened with education being its primary focus.

In the early months of the center’s life, Heartbeat International awarded the center its Life Launch Grant, a program that is geared towards generating new pregnancy help centers in under-served parts of the country. With the boost from the grant, the center was able to add limited obstetrical ultrasound scans to its offerings during this past year.

Its new pregnancy and infant loss program is the latest addition the center is working on. In Garza’s opinion, the Pregnancy Help Center is the ideal organization to serve women who are suffering from this kind of loss.

Tweet This: Its new pregnancy and infant loss program is the latest addition the Pregnancy Help Center of Galveston is working on

“I just wanted to volunteer and try to help women who were going through anything similar to what I’d gone through because the experience that I had was that my doctors were well meaning, but I didn’t really feel equipped for the experience from them,” she said. “And then of course, they’re not in the position, really, to help you emotionally or spiritually through the experience.”

The Pregnancy Help Center, on the other hand, is.

“We are a faith-based center and we are a medical facility,” she said. “So I felt like, we, if anyone on the island, should be the people who are providing that type of education as well as comfort and just compassion for women going through this.”

“And I felt like, if we weren’t going to do it, who was going to?” said Garza. “Because it didn’t really seem like anyone was equipped to, and it’s a very culturally taboo topic, as well. And a large part of the grief that women experience and that I experienced was that you feel like you can’t talk about it to anyone.”

Garza first approached the center with the intention of volunteering but ended up landing the role of client services director. Once she got her feet wet, the team learned that a couple of their clients were actually miscarrying their babies.

“We felt kind of an almost divine-intervention push that this was the next service that we needed to offer,” Garza said.

Now, one of the center’s board members and some volunteers are pulling together some materials on the subject. Together, they are creating a folder that will provide resources and education on what to expect before, during and after a miscarriage.

“That way, hopefully we can mitigate some of the confusion or the feeling of being alone that people often experience,” Garza said.

The center will also provide the woman with a small gift: a necklace with some “subtle but meaningful charms” related to miscarriage. If the woman has had an ultrasound image at the center, Garza says they hope to frame it and give it to her “so that she has some memory of the child that she carried.”

As the pilot program moves forward, the center is offering peer counseling to the couple of women who have already lost their babies. Garza considers the center to be “a place to tell their story and to know that whatever they’re experiencing physically, emotionally, or spiritually is normal and they’re not alone.”