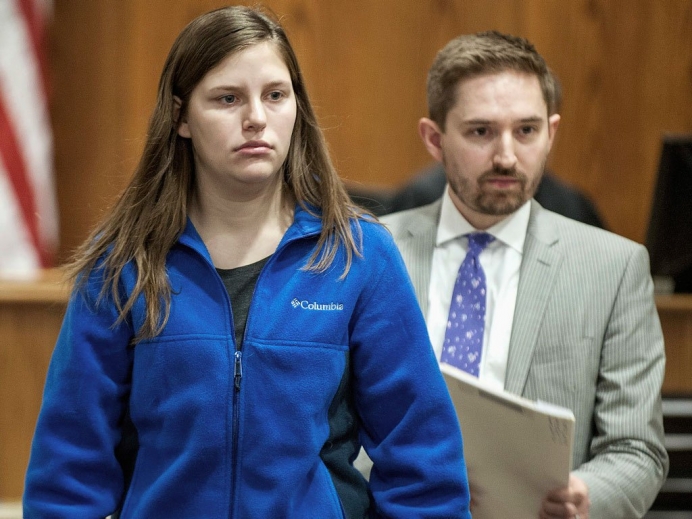 Lindsay Johnson is charged with suffocating her newborn son to death in April, 2016.

“Never let a good crisis go to waste.” Those words, originally attributed to Winston Churchill, were followed in a surprising way this weekend by Teen Vogue, which went out of its way to exploit a tragic story to disparage the life-saving work of pregnancy centers.
Covering the heartbreaking case of Lindsay Johnson, a 20-year-old former college student charged with suffocating her newborn child last April, Teen Vogue updated its young readers on Johnson’s upcoming day in court, before taking an off-the-wall turn to promote Planned Parenthood’s abortion business and tear into pregnancy centers.
In reality, neither Planned Parenthood nor a pregnancy center seem to be involved in any way with Johnson’s story. That fact makes the following sentences feel a little more than out of place:
From the search history that law officials found in Lindsay's computer, it's clear that the former student felt that she had limited options. But it's important to know that there are a lot of resources out there for dealing with pregnancy. Planned Parenthood is a great place to start, and their website alone offers a vast amount of information about pregnancy and safe abortion procedures. There's even an entire section of their website dedicated to teens.
It's also important to avoid Crisis Pregnancy Centers (CPCs), which scare scare women away from making their own decision by providing false information. CPCs masquerade themselves as health clinics, and sometimes offer free pregnancy testing and counseling in order to attract patients.
Johnson would more than likely have found the resources and compassionate support she needed to not only carry her baby to term, but embrace motherhood for her newborn son had she found a local pregnancy center.

The woeful irony is, aside from the prison time she’s likely facing and the money she would have paid Planned Parenthood for the abortion—plus a chance for post-abortive help through a local pregnancy center—her result would have been exactly the same: Her son would be dead either way.
Johnson’s story directly parallels that of Emilie Weaver, a college student at Muskingum University in Central Ohio, who was convicted in July, 2016 for suffocating her newborn daughter.
In one of the text messages retrieved from Weaver’s cell phone, she had messaged her daughter’s father—just after having killed their daughter—“No more baby… taken care of.”
While the article in Teen Vogue leaves out the similarities of Weaver and Johnson’s cases, it does end by pointing to several hotlines for women in unexpected pregnancies.
Several of those helplines are pro-life entities that connect callers to local pregnancy centers.
Above all, know that there's always someone you can turn to for assistance. And even if you don't feel like you can talk to a friend or family member, there are plenty of hotlines that offer counseling and support over the phone and through text messages. There are always options, and there's always help available.
Yes, Teen Vogue, the good news is, there are always options. There is always help available. All thanks to the pro-life pregnancy help community.
Tagged under
Tweet