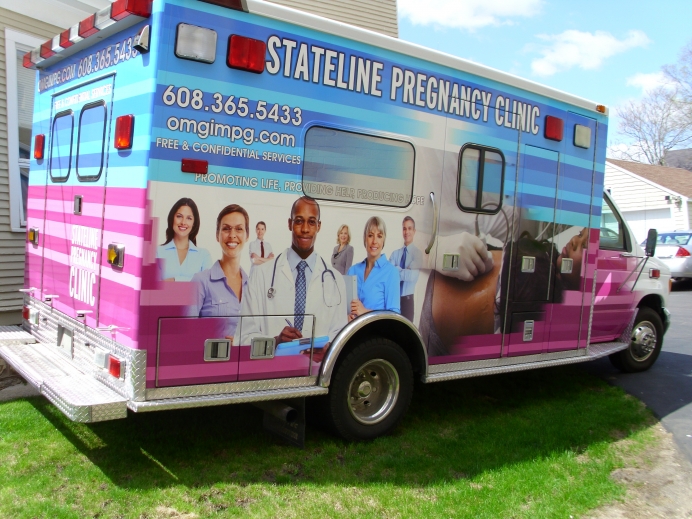 Thanks to partnerships forged by ICU Mobile and Save the Storks with local pregnancy help organizations, a growing number of centers are hitting the road across the nation with a mobile unit of their own.

One of the latest pregnancy centers to join the ranks of mobile unit operators is the Stateline Pregnancy Clinic of Beloit, Wis., which serves a community of just under 40,000 at the southern portion of the Wisconsin, spilling into northern Illinois.

“So many clients are in the 90th percentile of poverty,” Executive Director Marybeth Karstaedt said. “Even though the city isn’t very big, there’s a bit of disparity between east and west side.”

After deciding to go mobile, Stateline was able to raise all the necessary funds in one evening at a banquet in April of 2014. It was quite a step—especially for an organization that almost closed its doors only a few years ago.

Since hiring Karstaedt in 2010, the Clinic has seen a 350 percent increase in its clients.

At Stateline, as with many organizations, the desire to reach a previously unreached group with the “window to the womb” has set the wheels in motion to take their services to the street via mobile ultrasound.

Tweet This: Pregnancy center taking "window to the womb" on the road. @icumobile @SaveTheStorks

Besides reaching the women in her city, Karstaedt described plans of assisting other centers that have yet to go medical with their services.

“There’s a pregnancy help line in Janesville, but they’re not medical,” Karstaedt said. “If they have a client that is very abortion-minded, we want to bring our unit up there to them.”

Starting with a suite of pregnancy testing, counseling, and sonogram services, Karstaedt also said she hopes to see STI testing available on the mobile unit. In the last year, Stateline has seen a 60 percent increase in STI’s, a rate higher than unplanned pregnancies in the area.

Stateline’s hopes for reaching a new demographic through medical and mobile services puts it among a growing number of pregnancy help organizations “going medical.” Since 2011, when only 52 percent of PHOs were using ultrasound machines, that number had risen to 64 percent by 2014, according to numbers kept by Heartbeat International.

The first organization to partner with local pregnancy centers hoping to hit the road, ICU (Image Clear Ultrasound) Mobile’s founder, Sylvia Slifko felt not enough women were being reached via typical brick and mortar centers. Her goal of gaining accessibility eventually turned into its first-ever mobile unit in 2004.

After ICU Mobile launched its first unit in Akron, Ohio, other centers became eager to do the same. The organization began receiving dozens of calls from centers asking how to create their own fleet, and ICU Mobile’s program partnering with local pregnancy help organizations was born.

Along with selling vehicles to pregnancy centers, ICU Mobile also provides training for those operating the vehicle, as well as strategic planning to fit the needs of their particular community. The organization is hosting an upcoming conference for its affiliates, called “Fleet for Little Feet” in northeast Ohio, June 23-26.

Eleven years—and 40 units in 25 states—into the game, ICU Mobile isn’t alone in the mobile unit business. Another big player is the fairly young organization, Save the Storks.

In 2010, Storks’ founder Joe Baker spent a day in a mobile unit operating in New York City. Parked directly outside an abortion clinic, he said, 15 women entered the unit in the course of the day, with at least 10 choosing life.

After seeing such amazing results firsthand, Baker—who had raised funds for pregnancy centers since his childhood—began to ask himself how he could utilize such a strategic tool in a way that would provide excellent client care.

After visiting an RV lot, he quickly realized that although RV’s were large enough, they couldn’t be modified to fit his vision. Next, he visited a Mercedes dealership. Together, they created specs for the units now provided by Save the Storks.

These 24-foot-long, luxurious mobile units are growing in popularity, with 15 units now on the road and another nine in the works for the coming year.

The success stories of the mobile units are becoming common currency among many pregnancy help leaders. Staff at Pittsburgh’s Choices Pregnancy Center—which has partnered with ICU Mobile—for example, recently told the story of a client they hadn’t seen in two years who showed up at their center for a visit.

As far as the center’s staff knew, the woman had chosen to go through with the abortion—even after having seen her baby’s picture in the mobile ultrasound unit. Now, as she held her 2-year old son in her arms, she told them, “I couldn’t go through with it.”

Stateline is actively preparing for the launch of its new mobile unit June 2 at Hope Free Evangelical Church in Beloit. Although they’re starting with one weekly stop, Karstaedt said they are looking into other options for the mobile unit set up shop across the state line as well as near a local high school.