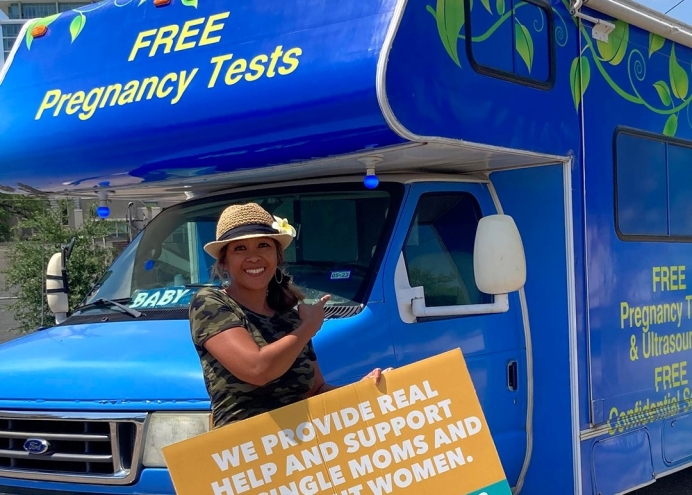 Sidewalk advocates can have “monumental” success after Dobbs

A pro-life organization specializing in sidewalk outreach saw a burst of remarkable success in changing minds for life in the recent aftermath of the Dobbs decision overturning Roe v. Wade.

Sidewalk Advocates for Life reported a “monumental day” in which more than a dozen individual women changed their minds from abortion to life at the largest Planned Parenthood in America - now a facility that refers women out of state for abortion.

Sidewalk Advocates for Life helped at least 14 women – a remarkable number for a single day - in its nearby mobile ultrasound unit in Houston, Texas, one of U.S. states where abortion was rendered illegal following the Dobbs v. Jackson Women’s Health Organization ruling.

“I'm really pleased to say that Houston, which is representative of many teams in abortion-restricted states, continued their outreach (after Dobbs),” said Sidewalk Advocates for Life founder and CEO Lauren Muzyka. “They knew that women would still be leaving their community for the nearest abortion facility, and they were moved to continue going out.”

The return of abortion law to the states saw several of those states, including Texas, pass a type of heartbeat law or other measure protecting unborn children from abortion. The six-week restriction for abortion in Texas, which has been challenged but remains standing, caused many abortion facilities to cease doing the procedures but not from referring to out-of-state abortionists, particularly ones in neighboring New Mexico.

Therefore, many Sidewalk Advocates for Life teams remain committed to going to these referral abortion centers. Such was the case in Houston, and because of that commitment, the team helped several women see an ultrasound of their unborn child, which most abortion providers reportedly do not offer.

“They saw 18 women board the mobile ultrasound unit,” Muzyka said. “The vast majority of women came off the bus and confirmed that they were choosing life, or they had a baby blanket in their hands, or they had made a follow-up appointment.”

The team believes 14 of the 18 women decided to choose life.

“It was such a monumental day,” Muzyka said. “The ones that they were unsure about as far as their decision for life ended up being what we call ‘hopeful saves,’ that they were either going to come back for another visit or maybe they needed a follow-up appointment because they were very early in their pregnancy. I mean, from a sidewalk counseling perspective, it is absolutely unheard of to see that many women board a mobile ultrasound unit (in a day).”

Muzyka said she asked the local team leader why she thought so many women were open to boarding the mobile unit and having an ultrasound. The leader gave two reasons.

It was good training being able to offer alternatives, Muzyka said.

“Connecting women with the free services on the mobile unit was absolutely paramount,” the local leader said. “We needed well-trained people out there.”

The second thing was because abortion was illegal in Texas, said Muzyka.

“We had said to the women, ‘Hey, before you cross state lines, before you drive 300 miles, or whatever it might be, to your nearest abortion facility, just give us a try,’” the leader said.

“Because abortion was not readily available, it was clear to her that women were more amenable to pausing and considering their options,” Muzyka added.

Another Texas community is seeing similar results, she said.

“San Antonio is having great success on the sidewalk,” said Muzyka. “They've had abortion facility closures, but they're still going to the Planned Parenthood.”

Abortion facilities in several states, not just Texas, appear to be closing. For example, the building which housed the Mississippi abortion center in the Dobbs case was sold, and the administrators plan to open a new abortion facility in New Mexico. Other shuttered abortion centers look to re-open in abortion-friendly states like Illinois.

Muzyka said her teams are seeing a similar trend.

“Even with this facility in Houston, we're hearing rumblings that they may close and go elsewhere,” she said. “New Mexico is being inundated right now, among other abortion-destination states.”

Meeting needs in a life-affirming way

That abortion facilities in states like Texas are ceasing providing abortions while still offering other services, including abortion referrals, presents opportunities for Sidewalk Advocates for Life teams to reach women, said Muzyka. Her group is encouraging women to seek out options through mobile units and brick-and-mortar pregnancy resource centers.

“We're still hearing that sidewalk advocates are seeing success on the sidewalk, and that they're still able to refer women to the pregnancy help organizations in their backyard,” she said. “Of course, we know if we can just get someone on a mobile unit or through the doors of one of our wonderful pregnancy centers across the United States, then it's a game changer when you get holistic options counseling and you get in front of a sonogram.”

Tweet This: Sidewalk advocates are seeing success post-Dobbs, & they're still able to refer women to the pregnancy help organizations in their backyard.

Muzyka, an attorney, was named Pro-Life Woman of the Year during this year’s Pro-life Women’s Conference. She started Sidewalk Advocates for Life after spending two years as campaign strategist with 40 Days for Life. Advocate teams can be found around the United States and go through training. Since the Dobbs decision, a new climate hovers over the country, therefore, the program will change a bit, according to Muzyka.

“We roll out a new training addendum at our (October) conference,” she said. “It's additional tips and strategies for this post-Roe America on top of the five-hour training that that advocates already get. It's really the same type of outreach: resources, options, hope, help.”

“There's a reason or set of reasons we know that brings a woman to the abortion or abortion-referral facility,” she added. “So, our hope is to figure about why she's there and then to offer to cover those needs in a life-affirming manner.”

Partnering with pregnancy help organizations is critical to the sidewalk advocates’ success.

“We as sidewalk advocates see ourselves as a team with pregnancy help organizations,” Muzyka said. “It's so hard to see a woman turn around on the sidewalk and consider life if we don't have a partnering pregnancy center or mobile unit in our backyard. We can see from all over the United States the partnerships that we have with pregnancy centers, and those centers and mobile units have been pleased to partner with us because we share their values.”

Gayle M. Irwin is an award-winning author and freelance writer living in Wyoming. She’s been recognized by Wyoming Writers, Inc. and the Wyoming Press Association for several of her works. She’s contributed short stories to seven Chicken Soup for the Soul books as well. For nearly 13 years, Gayle worked as Patient Resources Director at True Care Women’s Resource Center, a pro-life pregnancy medical resource center in Casper, Wyoming. She will retire in December 2022 to focus on her writing career. Gayle is the author of many inspirational pet books for children and adults, including devotions such as Walking in Trust: Lessons Learned With My Blind Dog and the upcoming Seasons of Life Seasons of Nature. She considers herself a human and pet life advocate and finds creativity and connection in God’s creation. Learn more about Gayle on her website: gaylemirwin.com