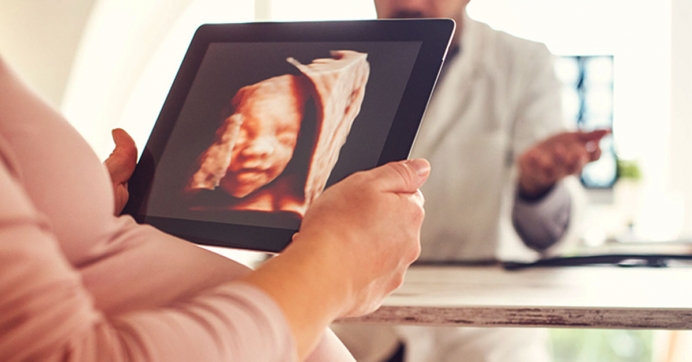 (American Life League) Did you hear the one about the expectant mother who saw her baby on the ultrasound machine and chose not to abort her baby? Oh yes, the ultrasound has paved the way for many moms to say yes to life. So who could possibly oppose it?

Well, let’s start with the Planned Parenthood Federation of America. The ultrasound is used at some PPFA facilities, but not to see the beauty of the growing baby. It’s used to assist in the abortion-killing of that preborn baby. As (Human Life International's) Susan Ciancio writes: “Doctors in Planned Parenthood and other abortion clinics use ultrasounds to determine the age and size of the baby or to guide them as they perform abortions. They rarely use them otherwise.”

Since Planned Parenthood’s president claims that abortion is healthcare, it should come as no surprise that the organization would use the most accurate technology available to bring precision to its killing ways.

Planned Parenthood busies itself to stop the pro-life facts about ultrasound from helping mothers choose life. For example, in Montana, “Yellowstone County District Judge Michael Moses issued a preliminary injunction blocking the ultrasound law and two others in response to a lawsuit from Planned Parenthood of Montana.”

The Lancet medical journal reports: “The ultrasound image of the fetus in utero is iconic and has transcended the medical domain into our everyday visual culture, where it has been deployed for commercial, social, and political purposes. The power of fetal imagery to inform contentious debates and influence policy and legislation that limit reproductive rights raises important questions about medicine’s role in the production, interpretation, and dissemination of these images.”

Reading this paragraph carefully tells us everything we need to know about the mentality of groups and individuals who will stop at nothing to end the lives of the innocent. Since when did a scientifically valid medical test—the ultrasound—become a weapon? Note the Lancet’s use of the word “deployed.”

It is utterly ridiculous that a medical journal would posit the thought that the results/images of a medically credible test are threatening to businesses to the point that perhaps ultrasound images should not be used unless the end result is a dead baby. While it is clear that the answer to these questions resides in abortion ideology, it does not justify such sleight of hand. After all, if such publications and individuals began talking honestly, the game for them would be over.

Tweet This: “If you want equal justice for all, and true freedom and lasting peace, then, America, defend life!"

Former abortionist and incredibly effective pro-life physician Bernard Nathanson once said: “I started changing my mind in 1973, when advanced technology moved into our hospitals and offices. I speak now of ultrasound imaging, fetal heart monitoring electronically, hysteroscopy, fetoscopy—things that gave us a window into the womb. Over a period of 3 or 4 years, I mulled over these technologies and what they revealed.” And he came to the conclusion that a human being exists and that abortion kills a human being.

Nathanson spent the remaining years of his life defending preborn babies, and when he succumbed to cancer in 2011 he left a legacy of truth for all those willing to accept the fact that even the hardened heart of an abortionist who committed thousands of such killings can see and embrace what is accurate science and undeniable fact.

The means to introduce and defend this accurate scientific imaging tool are at hand. Check out American Life League’s "Baby Steps" video and Live Action’s "Baby Olivia" video and never stop defending the innocent, helping others see the baby.

St. John Paul II called each of us to this work, saying: “If you want equal justice for all, and true freedom and lasting peace, then, America, defend life! All the great causes that are yours today will have meaning only to the extent that you guarantee the right to life and protect the human person.”

Tweet This: All great causes will have meaning only to the extent that you guarantee the right to life and protect the human person.

Editor's note: Judie Brown is the president and co-founder of the American Life League (ALL). She has served three terms on the Pontifical Academy for Life—appointed twice by Pope John Paul II and again by Pope Benedict XVI. This article was published by ALL and is reprinted with permission.