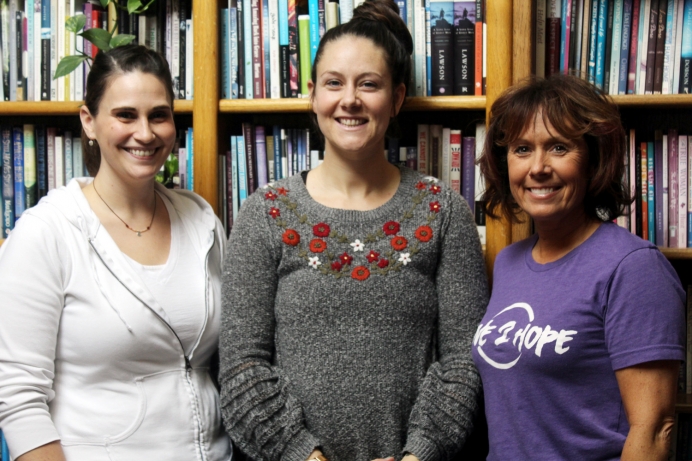 Three Wyoming women had gathered together in the living room of one of them, two seeking guidance from the third about implementing a program in their church to support young women facing an unplanned pregnancy.

The meeting was part of word-of-mouth discussion of a ministry that is spreading in Casper, Wyoming, and that has pregnancy center supporters excited to help women who are in need to grow spiritually.

Jodi Hubert hosted the gathering. She and her friend Sarah Hamilton, desiring to help women facing unplanned pregnancy through their church, asked questions of Jennifer Steffenhagen, whose church started an Embrace Grace group earlier this year.

Embrace Grace is a non-profit based in Texas that assists churches in establishing support groups and systems to embrace young women experiencing unplanned pregnancies and single parenthood.

The program includes curriculum for the churches, as well as for the moms. It also involves gifting  a “Love Box” to single moms who may be considering abortion, the box containing items geared for support and an invitation to church-hosted support group.

After talking and learning about the outreach Hubert and Hamilton plan to start a 12-week session this coming January 5.

A former volunteer for the pregnancy center, Hubert said she believed the program would be a good fit for Cornerstone Church’s mission outreach and a way to help moms in more than just a material way.

“When I was an advocate at True Care, I wished I could have had more time to meet the girls on a deeper level spiritually,” she said. “When I heard about Embrace Grace this summer, I was really excited, and at this year’s True Care banquet, I connected with Sarah and Jenn at the same time.”

Hamilton, who has attended Cornerstone for nearly a year since she and her husband moved to Casper, learned about Embrace Grace from Steffenhagen.

“I had just started volunteering at True Care a week before the (autumn) banquet. Jenn told me about Embrace Grace and showed me the Love Box,” Hamilton said. “I thought it was exactly what was on my heart.”

“About a year ago, I wrote my life’s mission statement that had to do with women and the unborn,” she said. “Hearing about Embrace Grace, I also found out Jodi wanted to start a group at Cornerstone. It was like the Lord worked all our steps and our hearts together. It was really cool!”

Hubert, who has attended Cornerstone for more than 15 years and is a ministry leader at the church, approached Cornerstone’s pastor and mission board with the idea of offering Embrace Grace.

Need for a second program

Steffenhagen, a part-time staff member at True Care, was happy to welcome another church willing to offer Embrace Grace in Casper.

“I saw there was a need for another program in the community, and I began praying another church would step up,” she said.

“We have sessions in the spring and fall, and if another church would step up and host a program in between those semesters, in winter and summer, the girls would not have to wait three to four months for the start of another session,” Steffenhagen said.

Steffenhagen, along with her co-leaders and other church members have planned a baby shower and pampering party for the ‘blooms’ in the fall program for this Saturday, December 7 at Paradise Valley Christian.

“They’re called ‘blooms’ because they are blooming physically but also emotionally and spiritually … just like a flower,” Steffenhagen said.

In preparation for the January program, Hubert, Hamilton, and others from Cornerstone will create Love Boxes for True Care staff and volunteers to give to clients.

The boxes will have an introduction to Embrace Grace, along with notes of encouragement and a few small gifts. A phone number is also included, and when women call, they are connected to a local group at a church, such as Paradise Valley and Cornerstone.

The Embrace Grace program officially started in 2012 and is international in scope. It’s president and co-founder, Amy Ford, experienced an unexpected pregnancy at a young age, and understands the fear and loneliness many single pregnant women feel. Ford will be the featured speaker at Steffenhagen’s church in March 2020.

“Amy is the guest speaker for our spring women’s conference,” Steffenhagen said. “We are super excited to have her! We plan to have a Love Box packing party while she’s with us.”

True Care has given out more than 200 Love Boxes during the past year. The staff and other supporters, including the women from Cornerstone Church, will pack 80 boxes in December to give to clients before Christmas. The women receiving the boxes during their pregnancy appointment will be able to connect with Cornerstone’s Embrace Grace program if they desire.

Hamilton and another True Care volunteer and Cornerstone member, Jacki Finnegan, who has served as an advocate for the center’s Baby & Me parenting program for more than three years, will co-lead the church’s inaugural Embrace Grace program next month.

Hubert will be available to assist Finnegan and Hamilton as needed.

“I’m hoping the ladies who come to Embrace Grace will also come to church, become part of a faith community, and raise their babies to know Jesus,” she said.

“I’m excited to bring the program to our church,” Hamilton said. “I’m looking forward to seeing the women experience Jesus.”