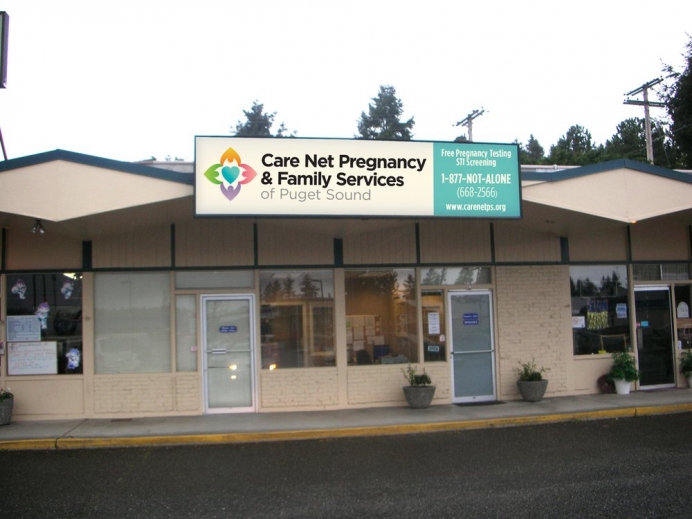 Prior to this week, the only place you might expect to find a regulatory section entitled, “Information Disclosure for Care Other Than Health Care” would be a George Orwell novel.

That could change Thursday in Seattle, when 12 unelected officials on the King County Board of Health vote on a proposal to create and apply the new definition to pro-life pregnancy centers operating in the county.

Applying only to Christian pro-life centers and medical clinics that do not refer for abortions, the new regulation would require centers—including state-licensed facilities like Care Net of Puget Sound—to post large disclaimers in waiting rooms, on advertising materials and on websites.

The disclaimer would read, “This facility is not a health care facility” in 10 specified threshold languages despite the fact that—at least in Care Net’s case, they operate under two board-certified OB-GYNs serving as medical directors, boast 42 doctors on their medical advisory council and employ three board-certified OB-GYNs, two physicians, three physicians assistance and 21 nurses.

By contrast, the 12-member panel pulling the strings for the county’s Board of Health includes just three medical professionals—one a dentist, another a professor of environmental health and the other a doctor at a local health clinic.

“If they can do this—an unelected council can take a business and decide they're no longer that business—that is a chilling precedent in Washington state,” Triller said. “They're not going to stop here. If they can do this here, then they'll have precedents to do it in the private offices, of maybe an OB-GYN.”

Tweet This: Seattle board of health to redefine healthcare to exclude #prolife ctrs.

King County’s assault on pro-life pregnancy centers isn’t the first in Washington state. In recent years, two bills that would force pregnancy centers and medical clinics to advertise free abortion—as has been the case in California, Hawaii and Illinois—have been unexpectantly turned away despite pro-abortion majorities.

Triller, whose organization provided over $6 million in services at no cost to patients or government entitles in 2016 alone, said she and her team are optimistic in the face of the new opposition—even though they are prepared to challenge the regulation in court if push comes to shove.

In fact, friends of the center filmed a playful mock tour of one of their locations and posted it to their Facebook page July 16. The video features staff members acting as Board of Health inspectors feigning outrage as they discover the center’s ultrasound machine, medical supplies, diaper closet, baby clothes boutique and—most notably—their framed certification of state licensure as a health care facility.

In reality, not one member of the Board of Health has paid a visit to Care Net’s center, but have instead relied upon past smear campaigns by NARAL Pro-Choice America and an “undercover” investigation by a pro-abortion group Legal Voice.

The Board of Health convenes Thursday, July 20, for its decisive vote.

“God rules, and we're going in in peace to share the truth and love like we do,” Triller said. “We realize that the people who are against us are and who's against us, it's a spiritual battle, and our Lord is mightier than all the struggles we might face in our head. He's come through for us before, and it's His will.”