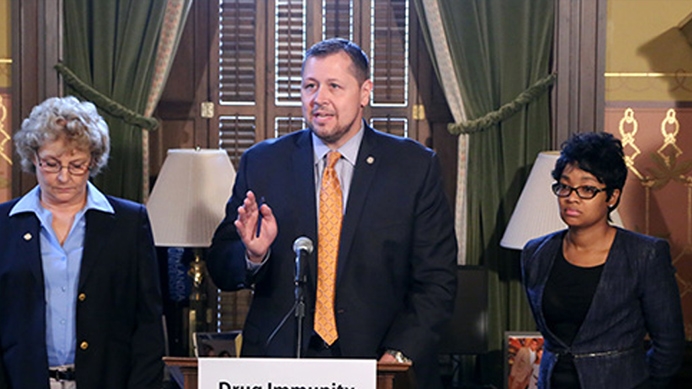 Michigan State Representative Brian Elder says his new bill forcing pro-life pregnancy help centers to essentially advertise against themselves is different from the California law the Supreme Court struck down this June. A review of the law's language shows otherwise.

Michigan State Representative Brian Elder has yet to withdraw his unconstitutional legislation attacking the free speech of pro-life pregnancy centers. Rep. Elder is defending his bill, claiming it's different from California's attack on pregnancy centers, and therefore the recent decision in NIFLA v. Becerra doesn't apply.

First, it's important to note that many journalists often don’t read legislation before reporting on it, and even some legislators don't read legislation. At Right to Life of Michigan, however, we do read it.

In this case, we've read both the California law struck down by the U.S. Supreme Court, and Rep. Elder's legislation. The relevant sections closely mirror each other, even using identical phrases and terms, merely in a slightly different order; NIFLA v. Becerra definitely applies. Not only that, but Rep. Elder's bill is actually 10 times worse than California's law.

Don't take our word on this, though. You can judge for yourself. Here's the relevant sections of California's law and Rep. Elder's bill:

“Unlicensed covered facility” is a facility that is not licensed by the State of California and does not have a licensed medical provider on staff or under contract who provides or directly supervises the provision of all of the services, whose primary purpose is providing pregnancy-related services, and that satisfies two or more of the following:

The facility has staff or volunteers who collect health information from clients.

"Unlicensed covered facility" means a facility that meets all of the following: (i) Is not a health facility or agency that is licensed under article 17 of the public health code, 1978 PA 368, MCL 333.20101 to 333.22260, and is not directly conducted, maintained, or operated by the United States or a department, officer, or agency of the United States. (ii) Does not have a licensed medical provider on staff or under contract who provides or directly supervises the performance of the services described in subparagraph (iii). (iii) Its primary purpose is providing pregnancy-related services to the public. (iv) Two or more of the following apply to the facility:

It has staff or volunteers who collect health information from clients.

An unlicensed covered facility shall disseminate to clients on site and in any print and digital advertising materials including Internet Web sites, the following notice in English and in the primary threshold languages for Medi-Cal beneficiaries as determined by the State Department of Health Care Services for the county in which the facility is located. (1) The notice shall state: “This facility is not licensed as a medical facility by the State of California and has no licensed medical provider who provides or directly supervises the provision of services.” (2) The onsite notice shall be a sign at least 8.5 inches by 11 inches and written in no less than 48-point type, and shall be posted conspicuously in the entrance of the facility and at least one additional area where clients wait to receive services. (3) The notice in the advertising material shall be clear and conspicuous. “Clear and conspicuous” means in larger point type than the surrounding text, or in contrasting type, font, or color to the surrounding text of the same size, or set off from the surrounding text of the same size by symbols or other marks that call attention to the language. REP.

The notice must be included in all print or digital advertisements of the unlicensed covered facility, and on all of the facility's internet websites, in larger point type than the surrounding text, or in contrasting type, font, or color to the surrounding text of the same size, or set off from the surrounding text of the same size by symbols or other marks that call attention to the language. (b) The notice must be included in all broadcast advertising of the unlicensed covered facility. (c) The notice must be posted conspicuously at each public entrance to the unlicensed covered facility, in each room or area in which clients or potential clients wait to receive services, and in each room in which services are provided to a client or potential client, written in a bold font and in at least 24-point type on a sign that is at least 8.5 inches by 11 inches in size.

“This facility is not licensed as a medical facility by the State of California and has no licensed medical provider who provides or directly supervises the provision of services.”

"This facility is not licensed as a health facility or agency by the State of Michigan and the services provided at this facility are not provided or directly supervised by a licensed medical provider."

Covered facilities that fail to comply with the requirements of this article are liable for a civil penalty of five hundred dollars ($500) for a first offense and one thousand dollars ($1,000) for each subsequent offense.

Is Rep. Elder’s proposed attack on pregnancy centers constitutional, because he left out the portion forcing them to advertise free abortions? No. Justice Clarence Thomas’ opinion in NIFLA v. Becerra from a few weeks ago clearly addresses this practically identical requirement notice for unlicensed centers:

"Even if California had presented a non-hypothetical justification for the unlicensed notice, the FACT Act unduly burdens protected speech. The unlicensed notice imposes a government-scripted, speaker-based disclosure requirement that is wholly disconnected from California’s informational interest. It requires covered facilities to post California’s precise notice, no matter what the facilities say on site or in their advertisements. And it covers a curiously narrow subset of speakers."

This legislation has no chance of surviving a court challenge. The only justification for this plainly unconstitutional legislation is making a political or policy statement. Rep. Elder chose nonprofits dedicated to helping women as the target for this statement. That's why we called him an "abortion radical;" he's using legislation crafted by pro-abortion organizations, helping to advance their top priority of shutting down pregnancy help centers. His bill is neither original nor independent.

In defending himself, Rep. Elder points out that he is a lawyer, and is thus well qualified to understand legislative text. Rep. Elder either hasn't read California's law together with his own legislation (meaning someone shoved it in front of him and told him to sponsor it, or else), or he has read them and he's being dishonest.

Again, we encourage pro-life constituents to contact Rep. Brian Elder and ask him to stop making excuses and withdraw this obviously unconstitutional legislation attacking pregnancy help centers. You call his office at (517) 373-0158, or e-mail him at This email address is being protected from spambots. You need JavaScript enabled to view it..

Editor's Note: This post originally appeared as Fact-checking Rep. Brian Elder on the Right to Life of Michigan Blog.