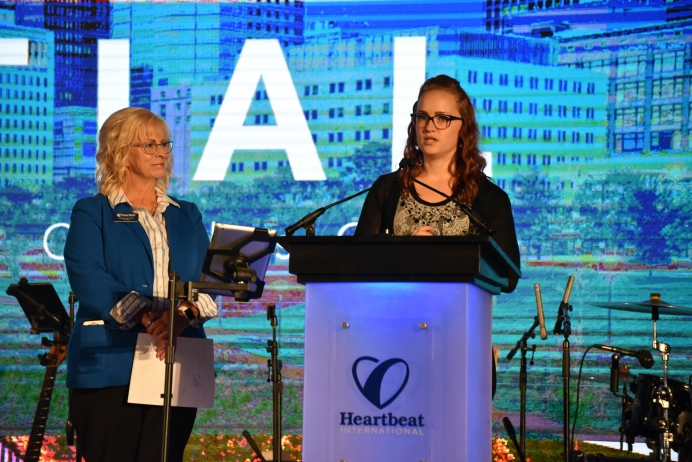 “When the Abortion Pill Rescue® Network first came under the umbrella of Heartbeat International back in the spring of 2018 there was so much that we could not have anticipated,” said Christa Brown, director of Medical Impact for Heartbeat International. “We could never have seen that big abortion would take notice of us so quickly and oppose us so fiercely.”

“How the pro-abortion media would write horrible stories about our efforts to empower women to save the lives of their precious children,” she continued. “How organizations with political agendas, like ACOG and the American Medical Association, would try to stop women from knowing the truth about abortion pill reversal.”

Brown introduced a panel discussion on abortion pill reversal (APR) at Heartbeat’s Annual Pregnancy Help Conference with three women whose lives have been impacted by the protocol.

Abortion pill reversal is a newer application of a decades-old treatment for preventing miscarriage.

The protocol is regularly assailed by abortion supporters and a corresponding abortion-supportive media.

After referencing these attacks as she opened the panel discussion, Brown cited the APRN’s impact and success over the last few years.

“But we also could not have foreseen that the number of reversal starts would triple in the first three years of us acquiring the program,” Brown said to applause. “That lives would be saved by the thousands and we would receive picture after picture of beautiful children with beautiful little faces that were once counted as actual abortion statistics.”

Statistics show that to date 2,000 lives and counting have been saved thanks to the APRN.

Heartbeat’s Medical Impact team has the privilege of seeing milestones in the lives of children saved by APR, she said, knowing these children’s lives would have been very different had it not been for the APRN.

Sarah and Rebekah are mothers who had taken the first abortion pill in the two-drug chemical abortion process, experienced regret, then found the Abortion Pill Rescue Network, and after starting abortion pill reversal, they went on to have healthy children.

Sarah shared her experience with APR and rescuing her son Isaiah, now two years old, with those gathered for the Heartbeat Conference.

“He is a joy we that didn’t even know we were missing,” Sarah said.

“Never before in our history could we literally reach a woman who’s in the middle of the termination process,” said Heartbeat Vice President of Mission Advancement Cindi Boston-Bilotta said of the abortion pill reversal protocol.

Tweet This: Never before in our history could we literally reach a woman who’s in the middle of the termination process - Heartbeat VP on APR

Sarah and Rebekah, who speaks about her APR experience and works with Heartbeat International in Mission Advancement, were then part of a panel along with Lisa Searle, who formerly worked in the abortion industry and now helps women save their babies as a nurse manager in Heartbeat's Medical Impact department. The panel was moderated by Boston-Bilotta.

There were a variety of external factors leading to her decision to seek a chemical abortion, Rebekah said, including a boyfriend and fear.

“But there’s also a sense of spiritual warfare,” she said.

It can lead you to think that abortion is the nearest exit from a scary path, she said, and that hope was on the other side of the abortion.

“And with the fear, it controls you,” said Rebekah.

She described a scenario of driving down the freeway, your destination in site, and everything mapped out, and suddenly it starts to storm, driving becomes more treacherous.

You are looking for control in the situation and the quickest path to exit the freeway.

“The abortion industry didn’t sell me a procedure,” Rebekah said, “they sold me hope.”

It was supposedly a compassionate choice for the child she already had.

Describing the philosophy of the abortion industry, Searle spoke of herding women through the abortion facility in groups for services and procedures, encouraged to move them along and discouraged from spending time.

Sarah said societal pressures can make women feel as though they should have an abortion to be able to pursue their goals.

“So, for me I was torn between doing what I felt was right and doing what society had told me was right,” she said.

“Having a lot of kids at a young age - my circumstance - was not okay,” said Sarah, “and everyone, society, my boyfriend, told me abortion was okay.”

“And when it came to my family, they would have never thought abortion was okay, but they also did not think the fact I was pregnant was okay either,” she said, “so I wanted to try and hide that from them.”

“He is perfectly healthy,” Rebekah said.

“Both Isaiah and Zechariah are miracles that have milestones now,” Boston-Bilotta said.

Searle shared the story of a woman who did not start reversal until around 72 hours but was ultimately able to save her child.

It takes brave and courageous women to be able to reach these milestones, Boston-Bilotta said, along with ministries, organizations, and medical providers in support of and conjunction with the Abortion Pill Rescue Network.