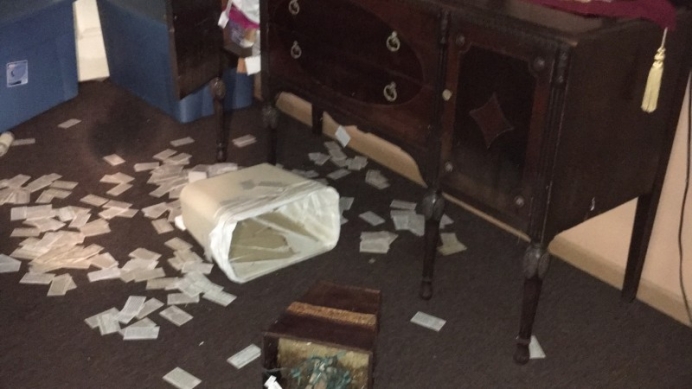 Hours later, several inches of rain overwhelmed the creek just a few hundred feet from their building, pouring water into the ministry’s home for its ten years of service. In addition, the city of Cuba, Mo’s sewage system backed up forcing water up and out of toilets in various areas of the city, including Lifeline’s offices.

“The toilets actually lifted off of the foundation,” Amato said. “And the foundation itself shifted, too. It’s as if an earthquake and a flood came through at the same time.”

Tweet This: "It’s as if an earthquake and a flood came through at the same time.”

In the parking lot, Amato found the center’s propane tank floating on its own. Four cars and a van from a ministry next door drifted away.

Cuba, just an hour and a half drive from St. Louis off of I-44, is in Missouri’s poorest county. The center sees an average of 125-150 client visits each month and is looking for ways to get back on track as soon as possible.

But the rebuilding of Lifeline won’t be at its current location. “It’s a total loss,” Amato said. Our landlord has been so good to us; he brought out a dumpster at no charge so we could load our furniture and everything else that was lost in there. But he won’t be able to rebuild.”

At the moment, Amato is working from home and connecting with the local food pantry which is offering space as Lifeline looks for its permanent home. Some possibilities are presenting themselves, but discerning the right location and finding funding will take time.

Still, Amato sees the blessings in spite of the storm. “We had just completed our baby bottle campaign,” Amato pointed out. “And on Thursday night we took all of the baby bottles with $21,000 and placed them all up on shelving, not knowing what was coming Friday.”

Another gift came from a local bank’s president. “We had $500 in checks that got wet,” Amato said. “But when I dried them out and brought them to the bank, he just hugged me and said they would make all of them good. How many people get a hug from the bank president?”

Right now, members of the Cuba community are offering supplies, yet “We have nowhere to put them at the moment,” Amato said. “But we know the community will be there for us when we get a place.”

The future appears clouded for Lifeline, with the challenge of finding a new home. But Amato is looking ahead with optimism. As Lifeline prepares to celebrate its 10th anniversary in October, Amato believes it may be time to purchase a new location so that they are no longer renting.

“If we had $200,000, we could do it,” Amato said. This, she explained, would be less expensive than renting over the long term. “Our landlord has been such a blessing,” she said. “But God may be moving us in a new direction.”

To assist Lifeline financially during this crucial time, visit www.lpccfriends.org, or send contributions to: