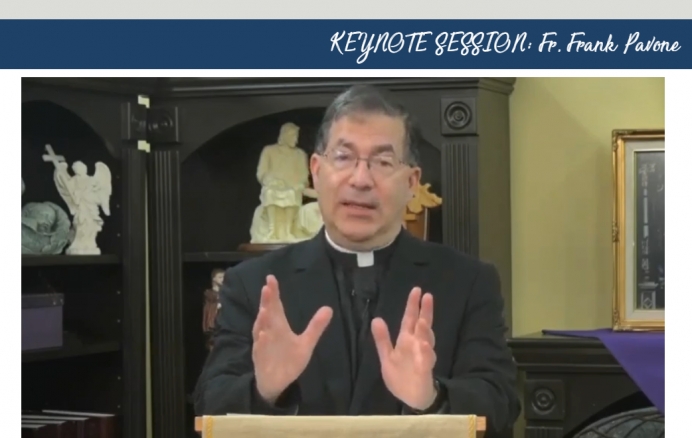 Pro-life Christians in the U.S. must be involved in the nation’s elections to ensure success for the pro-life cause, Father Frank Pavone told the Wednesday assembling of Heartbeat International’s Annual Conference.

The National Director for Priests for Life addressed the conference on the 2020 Elections 2020 and how pregnancy centers have a role in them, saying that one does not have to be politically focused but it is important to be involved and to vote.

His address kicked off the second day of Heartbeat’s first-ever virtual pregnancy help conference. The event connected the pregnancy help movement from remote locations worldwide April 14-16 in lieu of an on-site conference, refashioned in this way in response to the COVD-19 pandemic.

Pavone cited the Gospel of Mark 12:17, “Give back to Caesar what is Caesar's and to God what is God's."

We say "no" to unjust laws, he said, and do not put or trust in the state for happiness, as the latter comes only through God.

“We know where our ultimate destiny is,” said Pavone.

“You can be a good citizen and a good Christian at the same time,” he said, adding that this means living the obligation of our citizenship.

“We are not free as Christians to cast aside our civic duty,” said Pavone, as we live in the flesh and are a part of a politcal community.

“It’s both obedience to God and love of neighbor to participate civically,” he explained, and our society, families and loved ones depend on this.

The bottom line, he said, is it is hard to ignore the impact of elections and policitics even if we don’t take part.

For pregnancy centers, Pavone noted, this was no more evident than with the NIFLA v. Beccera case two years ago.

In that case the State of California attempted to order pregnancy centers in the state to participate in compelled speech favoring abortion as a condition of operating. The Supreme Court struck down the unjust law, titled the, “Reproductive FACT Act,” in 2018 as unconstitutional.

The very freedom of the pregnancy centers to conduct their missions was at issue there, stressed Pavone.

And the court ruled in favor of the PCs, he said, “But that depends on who’s on the court.”

Who chooses the president and members of Congress, and thus determining who is selected as the nation’s judges, he asked.

Pavone then cited the last Gospel of Matthew 28:20, “Teach the nations to carry out everything I have commanded you ...”

Pro-life Christians must focus on making the world more just without thinking it will be a utopia, he said.

Pavone said that one year from the day, depending on who wins the U.S. presidential election, we could see the defunding of Planned Parenthood, explaining how this was possible through the composition of the Supreme Court and the likelihood of more impending openings there.

We will we see the court’s balance shift in favor of the pro-life cause, “Only if the voters in the 2020 election show up and vote for pro-life candidates,” he said.

He went on to make the distinction that we are not all called to be political experts or make that the focus of a center’s work.

But it’s because we are interested in the fate of religious freedom that we have concern for elections, he explained.

Pavone answered prevailing pro-life frustration over the fact that Planned Parenthood has not yet been defunded, explaining that this is due to Congress continually voting along party lines.

Pro-life members of Congress are voting pro-life, he said, but a super majority of 60 votes is needed in the Senate to achieve such things, and each senator has only one vote.

“That is the hill we need to climb right now,” he stated.

“We could get the job done a few months from now, if we get enough senators in there,” he added, underscoring the need for pro-life supporters to vote.

Pavone cautioned against allowing cynicism, apathy and disinterest to creep in.

“You don’t have to be politically focused to be active,” he said.

“They will go that far if the election goes the wrong way,” Pavone said.

When analyzing voter motivation, he said that typically that pro-life voters are found to be more motivated. It’s just a matter of spurring them to action.

He urged conference attendees to check their registration right away and urge others to do so, and he said that prayer cards were available.

Pavone began to wrap up his address with praying the election prayer.

He followed with emphasis that it’s not an exaggeration to say that just those who are part of the Heartbeat conference, just those listening to his address, could be instrumental in determining the outcome of the 2020 elections.

“It matters that we are involved,” Pavone concluded. “Let’s get these victories together.”

The full text of the election prayer is below:

O God, we acknowledge you today as Lord,
Not only of individuals, but of nations and governments.

We thank you for the privilege
Of being able to organize ourselves politically
And of knowing that political loyalty
Does not have to mean disloyalty to you.

We thank you for your law,
Which our Founding Fathers acknowledged
And recognized as higher than any human law.

We thank you for the opportunity that this election year puts before us,
To exercise our solemn duty not only to vote,
But to influence countless others to vote,
And to vote correctly.

Lord, we pray that your people may be awakened.
Let them realize that while politics is not their salvation,
Their response to you requires that they be politically active.

Awaken your people to know that they are not called to be a sect fleeing the world
But rather a community of faith renewing the world.

Awaken your people to a commitment to justice
To the sanctity of marriage and the family,
To the dignity of each individual human life,
And to the truth that human rights begin when human lives begin,
And not one moment later.

Lord, we rejoice today
That we are citizens of your kingdom.

May that make us all the more committed
To being faithful citizens on earth.

We ask this through Jesus Christ our Lord. Amen.