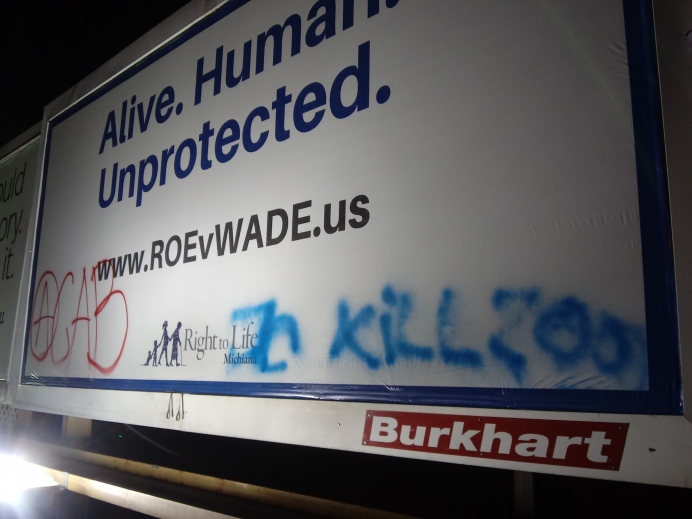 A streak of vandalism has besieged pro-life ads in South Bend, Indiana, for the last five months.

Vandals spraypainted the billboard with an anti-police acronym “ACAB” and another obscure message which appears to read, “Kill 200.”

This is the third incident of vandalism that has struck St. Joseph County Right to Life in recent months.

The first occurrence was last September, just after the discovery of 2,246 aborted babies’ remains at the home of local abortionist Ulrich Klopfer. In the days following the news, the pro-life group discovered spray paint on four of their bench ads near the local abortion facility. Those ads promoted life-affirming resources such as Abortion Pill Reversal and Women’s Care Center, a local pregnancy help center.

The second incident was in December, shortly before Christmas. Again, the pro-life group found spray paint on six of their bench ads promoting resources for women in need.

“This is concerning,” said Jackie Appleman, executive director of Right to Life Michiana. “The vandalism is escalating from simply hiding helpful resources to promoting violence. Unfortunately, this isn’t surprising because the abortion movement is intolerant to other views and promotes violence.”

Tweet This: “The vandalism is escalating from simply hiding helpful (pregnancy help) resources to promoting violence"

The vandalism comes amidst tensions over the controversial opening of an unlicensed abortion facility in South Bend. In response to the facility’s opening, pro-life groups have been promoting alternatives to abortion throughout the city. Women’s Care Center, a local pro-life pregnancy help center even opened a new location right across the street from the facility—something which South Bend Mayor and Democratic presidential candidate Pete Buttigieg attempted to stop.

As concerned as St. Joseph County Right to Life is about the upswing in tensions, they remain mission-focused.

“Nothing the abortion movement does is going to stop us,” says Melanie Garcia, outreach manager for St. Joseph County Right to Life. “Nothing’s going to stop us from being out there and educating the public on the value of life and violence of abortion.”