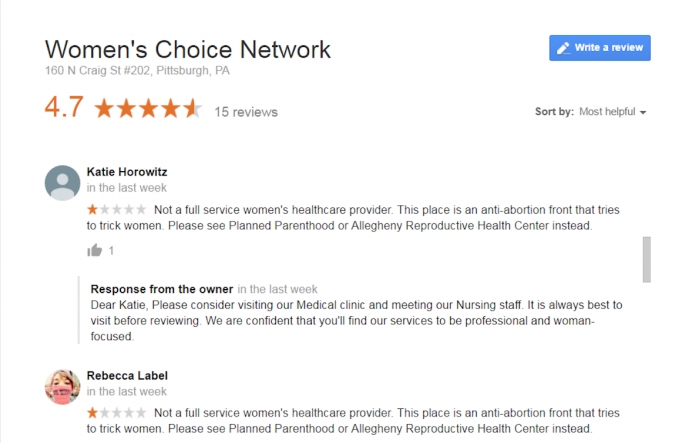 What does the average workday look like at a local Planned Parenthood? Other than “performing” abortions, engaging in the resale of body parts harvested from aborted babies and throwing pizza parties after hitting a quota for abortions, that is.

At least one Planned Parenthood office has found a new way to pass the time: harassing nearby pro-life pregnancy centers by posting negative Google reviews.

That’s what three high-ranking employees of Planned Parenthood of Western Pennsylvania were up to Feb. 2, targeting all four locations of Pittsburgh-based Women’s Choice Network with an onslaught of one-star reviews that were accompanied by a message pointing potential clients to Planned Parenthood.

By the time a Women’s Choice Network director saw the negative reviews at the end of last week, Horowitz and her co-workers had posted about a dozen reviews across the network’s four Google Local listings in the space of just 24 hours.

Women’s Choice Network executive director Amy Scheuring’s first order of business was to double-check her records and make sure none of the negative reviews came from actual clients. That’s when she confirmed the Planned Parenthood connection, which includes Horowitz and Katherine Schott and Rebecca Label—both staff clinicians with Planned Parenthood.

Horowitz is a known fake client at pregnancy centers in the Pittsburgh area, Scheuring pointed out, and recently visited one of Women’s Choice Network’s locations, where staff identified her.

“I think that Planned Parenthood feels very threatened in this political climate,” Scheuring, who has encouraged supporters to pray for the Planned Parenthood staffers by name, said. “They’re going to lash out at who they perceive as the enemy, so I really think that’s where a lot of this is coming from.”

While Scheuring worked with her website contractor, Brad Mandel of Ad America, to flag and remove many of the negative reviews over the weekend, as of Wednesday morning, one listing that had a 4.7 out of 5-star rating last week was down to 3.9.

Scheuring, who credited her staff’s vigilance to catch the negative reviews before they did any further damage, said the blitz came at the tail end of a month where her centers served 89 new clients with free ultrasounds, pregnancy tests, peer counseling and more.

“This is an item for prayer. People need to know that we’re targeted,” Scheuring, who has served in her current role since 2003, said. “I really felt like that was a shot across the bow that said, ‘We’re watching you. We’re going to negatively review your center.’

“One of the messages for us who are on the front lines is, we need to be checking our web presence all the time.”

Mandel, who works with over 150 pregnancy centers, said that though some negative reviews—usually dealing with outdated information such as operating hours and location address—are legitimate, one key is to respond positively and quickly to a negative reviewer.

Additionally, pregnancy centers are also able to flag negative reviews for policy violations, which is what Mandel did on behalf of Women’s Choice Network.

“My common response is, ‘Let’s leave an owner response on that review as quickly as possible and also flag it,’” Mandel said. “Even if we don’t get it removed, at least we are telling a client or prospective client that we’re taking a stance for all the things we do well in the center.”

Another factor that goes into the Women’s Choice Network’s dip from 4.7 to 3.9 stars is the number of total reviews on the Google Local listing. Since the page only has a total of 15 client reviews, the flurry of one-star reviews disproportionately impact the overall rating.

A long-term strategy to help overcome the negative impact is to encourage positive Google reviews from clients and other community members, Tim Stephens of Extend Web Services, which also serves over 150 pregnancy help clients, said.

In fact, a 2016 report from Care Net, a national network of over 1,100 pregnancy help centers, shows 97 percent of all pregnancy center clients reported a positive experience, indicating a wide pool of perspective reviewers.

“If you can’t get a negative review removed, your best option is to gather positive reviews to help offset the negative rating,” Stephens said. “These reviews can be written by anyone who has had interaction with your center so long as they aren’t a staff or board member. This is one more reminder of how important it is for a center to be proactive in upholding their online reputation.”

Tweet This: 97 percent of pregnancy center clients report a positive experience, per @InspireLifeNow

Stephens noted he’s also dealing with a similar issue with one of his clients, where pro-abortion activists have been caught using Facebook to plan an online attack against a pregnancy center by attempting to make changes that include marking the center as permanently closed on the Google Local listing.

“It’s disconcerting, to say the least, to see these types of blatant and shameful attacks on the pregnancy help community,” Stephens said. “Attacks like this are pretty common in the business world, where competitors can disparage a local business with a couple of bad reviews, so it’s helpful to know a bad review isn’t a death sentence, but it’s something we can work to overcome.”