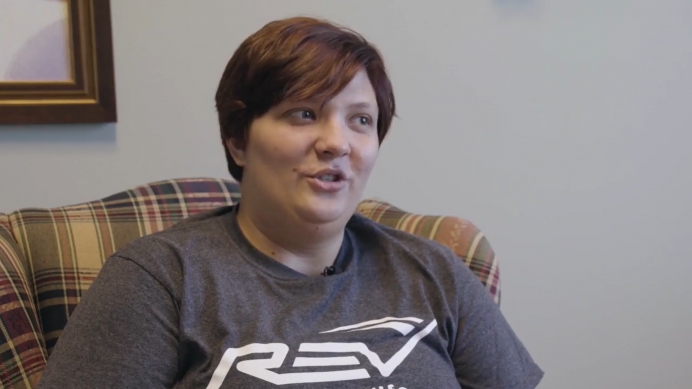 Post-abortive mom chooses life, tells moms facing unplanned pregnancy: “You can do it”

When Chelsea walked into The Hope Clinic in Decatur, Indiana, her plan was pretty straightforward: Find out how far along she was in her pregnancy, and proceed to have an abortion.

Hurting from drug use and a previous abortion, she just didn’t believe she deserved another chance at motherhood. All Chelsea wanted from The Hope Clinic was to know her baby’s age. But what she got was so much more.

When she sat down with the center’s nurse manager, Mary Carol, it was a moment to reconnect. Mary Carol had seen Chelsea the previous year when she was weighing the decision to abort.

“Mary Carol begged me not to do it,” Chelsea recalled in a video testimonial for The Hope Clinic. “She wasn't trying to make me do something I didn't want to do, but she just didn't want me to carry the regret for the rest of my life.”

As Chelsea shared the pain of her previous abortion during their second meeting, Mary Carol met her with love.

“She never judged me,” Chelsea said. “She never turned her back on me. I never felt like I needed to hide who I really was when I came.”

Tweet This: “She never judged me. She never turned her back on me. I never [] needed to hide who I really was when I came” - pregnancy center client

Mary Carol fully believed in Chelsea’s ability to care for her baby.

“I remember affirming her that she was able to carry and give her child life,” she said

But Chelsea still wondered if she deserved to be a mother to this new baby.

“I wanted to have another abortion because I didn't feel worthy to be a mom again because I...I killed him,” she said, recalling the abortion of her 14-week unborn baby.

Mary Carol had another perspective.

“She just reassured me that that's not how that works,” Chelsea said. “Like, I needed to forgive myself because God had already forgiven me for what I had done. It was really important for (Mary Carol) to be there in my life at that point in time, because I didn't want to have (my baby), because like I said, I didn't feel like I deserved her. She kept reassuring me.”

But even with Mary Carol’s helpful hand, Chelsea struggled with the decision to have another abortion.

“The further along I got, the more scared I got because I didn't have the money for the abortion,” she said. “And that is solely what stopped me from having the abortion.”

Having relapsed into drug use, Chelsea was now concerned about the condition of her unborn baby. In over her head, she tried to herbally abort her baby, but it didn’t work. Her little girl continued to grow, and The Hope Clinic continued to be there for Chelsea and her family. Eventually, she got clean again from her drug use. Soon, she gave birth to her daughter, Amariah, and things seemed to take a turn for the better.

Chelsea continues to be a client of The Hope Clinic, utilizing the center’s Baby Bucks program to earn material assistance at the center’s baby boutique. At the end of 2019, The Hope Clinic sponsored her attendance at an abortion recovery retreat through Rachel’s Vineyard.

“She was simply overwhelmed,” said Jim Heckman, executive director of The Hope Clinic. “She was just blown away by what they did for her.”

Heckman says that Chelsea’s experience at the retreat and her whole healing process has helped The Hope Clinic in developing its abortion recovery ministry. He added that a significant portion of the women who come through his clinic have had an abortion in their past. Overall, the clinic sees about 500 clients per year, offering ultrasound scans, STD testing and treatment, and parenting classes all free of charge.

Reflecting back on Mary Carol’s very first meeting with Chelsea, he is affirmed in his belief that a woman should be met with compassion from the outset of her relationship with Hope.

“It just really speaks to how important that engagement is,” he said. “That initial engagement has to be so compassionate and so judgment-free and just full of God’s love, and we just have to shower (clients) with that regardless of the outcome.”

Thankfully for Chelsea, she is now experiencing more and more positive outcomes since coming back to Hope.

Mary Carol, who recently saw Chelsea at the clinic, said in an email, “She just GLOWS.”

“Her story makes it clear that choice to destroy life takes one down a spiral to more death,” she said. “But choosing freedom in Christ, one becomes a New Creation."

That feeling offers a significant contrast to what she remembers of her abortion. When asked what she would say to a woman currently considering abortion, she had one message.

“Don't do it...don't do it,” she said. “You feel everything…You remember, you remember... Everything hurts. It hurts really bad, more spiritually than physically, but physically as well."

“Now that I actually went through the pregnancy, I have my daughter and I love her,” said Chelsea. “I would never—I don't care if I was pregnant with triplets—like, I would not abort again.”

And her words for expecting moms?

“You can do it,” she said. “You can. You got it. It's only 40 weeks. If you don't want to keep the child, don't. But it's only 40 weeks compared to the rest of your life. That's not that much time. Just have the baby, you know, and let it be loved by someone.”