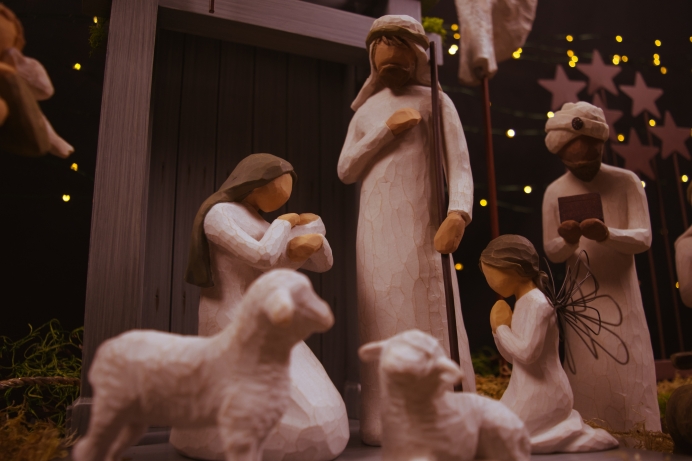 When our three sons were young, they received generous shipments of Christmas gifts from their grandparents, who live in another state.

Most of the gifts arrived early enough to where the boys started a fun tradition they dubbed the “present fort.”

Each time the delivery truck came, they would add more gifts to the three-foot-high wall constructed around our dining room table.

Then they would curl up inside the present fort to work on their home school assignments, happily anticipating Christmas Day.

Your traditions might not include a “present fort,” but I’m guessing you have some unique memories of Christmas.

This is arguably the most festive time of the year for our society, what with special music and parties and treats and decorations. Even people who don’t necessarily believe in God enjoy the generosity and warmth of Christmas—the giving and receiving, the well-wishing and good cheer.

The gift-giving of Christmas reminds us of the generosity of God, Who gave us the best gift of all—His Son, Jesus.

Here’s the interesting thing: at the outset, Jesus didn’t look like much of a gift to mankind.

When He was born, only a handful of people understood His identity. Mary, Joseph, and some shepherds. Simeon and Anna. A while later, some wise men who came and worshipped Him.

Most other folks whispered about Jesus’ dubious origins behind Mary’s back.

When He began working miracles, their cynicism kept them from believing He was anything other than an ordinary small-town resident just like them.

Even Jesus’ own disciples failed to recognize His true identity until after His resurrection from the dead.

(Yes, Peter proclaimed Him to be the Messiah, but in the next breath, he rebuked Jesus for saying He would suffer and die—see Matthew 16:13-23.)

At first, God’s greatest gift wasn’t exactly recognizable as such.

Yet the Son of God laid aside His glory to identify fully with us (Phil. 2:6-8; Hebrews 4:15-16). He put aside His rights to come alongside us and show us what the Father is like. He wrapped Himself in human skin so we could be near God without getting scared to death.

And here’s the most amazing part: Jesus skipped none of the human experience.

And though it’s where He was laid as a newborn infant, He didn’t begin His earthly life in a manger. No, He came to earth inside the womb of a young Israelite woman whose people were oppressed and dominated by the political powers of the time.

Jesus didn’t start life as an infant, but as a zygote. Then He grew to an embryo, then a fetus.

Nine months passed from the time the angel Gabriel made the startling declaration to Mary about Whom she would bear to the time she first swaddled Him.

Think of it—Jesus lived on this planet for thirty-three years, and He spent the better part of one year growing in utero.

Long before Jesus spent 40 days in the wilderness, he spent 40 weeks in the womb. Let’s not miss the significance of this.

Life in the womb is a critical part of the human experience.

Tweet This: Life in the womb is a critical part of the human experience

What happened during the first nine months of Jesus’ life on earth?

The Psalmist gives us a glimpse into every human being’s gestation in Psalm 139:13-16:

"For it was you who created my inward parts; you knit me together in my mother’s womb.

I will praise you because I have been remarkably and wondrously made. Your works are wondrous, and I know this very well. My bones were not hidden from you when I was made in secret... Your eyes saw me when I was formless; all my days were written in your book and planned before a single one of them began."

The Hebrew word for “formless” in this passage is “golém,” which can mean embryo. This is the only place in all of Scripture where “golém” is used.

Now get this: golém comes from the root word “galam,” meaning “to wrap.” So “golém” means “something wrapped.”

Stop for a moment and let that sink in.

Is this not sheer poetry composed by God?

Jesus is the best gift the world has ever received. He came wrapped in human skin, the only begotten of the Father, full of grace and truth, the atonement and redemption for our sin.

Yet it’s not only Jesus who came as a “golém” –as “something wrapped.”

Every human being ever conceived is a present from God. Every single girl and boy is hand-crafted and gift-wrapped by the Almighty.

The baby whose conception was not anticipated or desired by his or her parents is every bit as much a gift to humanity as the child who was hoped for and planned by Mom and Dad.

Tweet This: The baby whose conception was not anticipated or desired is every bit as much a gift to humanity as the child who was hoped and planned for

If anything, God has a special interest in the vulnerable and marginalized—like endangered preborn children.

He created them. He values them. He loves them.

He calls us to speak on behalf of those who have no voice. He asks us to treasure the ones others can’t see as a gift, at least not yet.

Those of us in the pro-life movement have a unique opportunity.

Like Mary and Joseph and the shepherds, like Anna and Simeon and the wise men, we may be among the very few who truly understand the great value of God’s gifts, wrapped by Him inside the womb.

Not everyone shares God’s perspective on the lives of those we work to rescue.

What an honor to carry on this labor of love. What a privilege to speak and act for God.

What a wonder to help spare the life of another gift from Him.

May your Christmas be filled with the joy of valuing human life as God does.