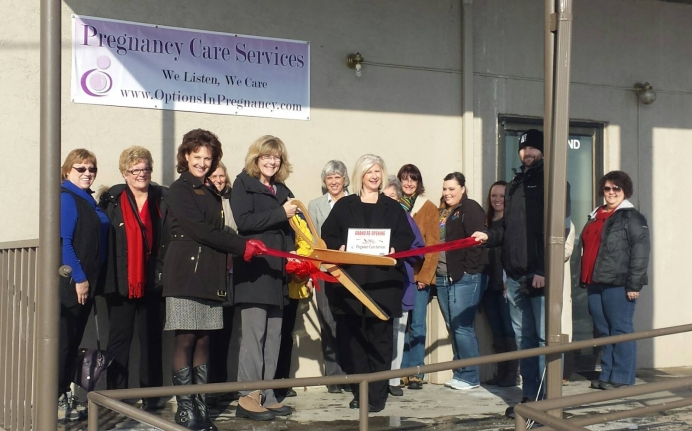 With a population near 18,000, Hermiston, Ore. is the largest city in the eastern portion of the Pacific Northwest state. Pregnancy Care Services has a long history in the community, and recently the pro-life organization relocated, generating greater exposure to its services and mission.

“There’s a lot of activity where we are, people coming and going quite a bit,” Debbie Cissna, the organization’s executive director, said. “Our visibility has increased.”

The center re-opened at its new location a few blocks from a local high school Jan. 3. Previously, the office had been in a strip mall that wasn’t easily accessible. After Cissna had driven past a rental sign several times during the summer of 2016, she felt prompted to inquire about the available property in August.

However, the rent was too high for the small center. The owner asked what organization she was with, and when Cissna told her, the woman, who supported the mission, told her of another office space, smaller and less expensive.

Cissna liked what she saw—particularly in terms of location.

Cissna and her team got to work in the new office, creating a warm and welcoming environment that included new paint, carpeting and an envisioned layout, to make a positive first impression on clients.

“So many times we who are in this mission field come at it from our hearts; we want to show Christ’s love and give the Gospel and just love on these girls, but I think sometimes we forget where they’re coming from and putting ourselves in their shoes and speaking their language,” Cissna said. “This is our opportunity to do that.”

Cissna’s organization, which serves 500 clients a year between its Hermiston and Pendleton locations—30 miles apart—are looking forward to a new season of growth and service in 2017, which gets started with the relocation and a fundraising banquet Jan. 22 featuring Rev. John Ensor, a long-time pregnancy help leader and current president of PassionLife, a pro-life organization focused on equipping and establishing pregnancy help efforts outside of the U.S.

That international focus comes just in time for Pregnancy Care Services’ new Hermiston location, where Cissna has added a bilingual client advocate to make inroads to a Hispanic community that makes up nearly 34 percent of the overall population.

The organization offers free pregnancy testing, options consultation, an Earn While You Learn program, a baby boutique and an abortion recovery program among other services.

Cissna, who is in her third year as director, is currently the only paid staff member, working alongside three to four patient advocates and six to eight other volunteers who help in various ways.

She envisions the organization growing and becoming an ultrasound-equipped medical clinic in the future, and the new location’s structure may be an ideal setting to do just that.

“The seeds are being planted,” she said. “Behind one of the walls is just empty storage space – my vision is that the wall comes down and that become our medical side. There’s a lot to going medical (but) I’m a visionary.”

The ever-expanding vision of Pregnancy Care Services is something Cissna hopes to share with her community at the upcoming banquet, and throughout 2017.

“We want to rally the community to our mission,” Cissna said. “Someone needs to give them the opportunity to participate. Now is the time; we have a voice – let’s use it. It’s exciting that God is on the move here and helping us grow and reach more and more people.”