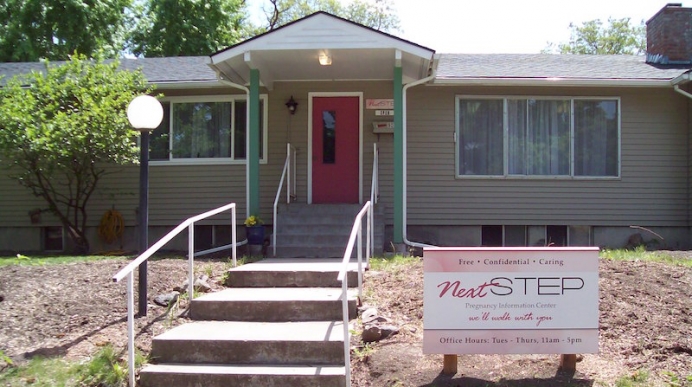 Next Step was given its new 4,530 square foot building early in 2016 Photo Courtesy: Next Step Pregnancy Information Center

Oregon Pregnancy Center Director 'Gets in Line' for Free Building

When Laurie Delaney became the executive director of Next Step Pregnancy Information Center two years ago, finding a new location for the center wasn’t in her plans. She was focused on creating better ways to serve clients, including an Earn to Learn program and parenting education.

However, when she attended the Oregon Pregnancy Center Association summit in 2015, Delaney learned that many pregnancy centers were relocating to bigger, better, buildings—for free. Stunned, Delaney began joking that everyone should get in line, because God was giving away free buildings.

It turns out God had the last laugh.

Next Step was operating out of a 755 square foot building just off the main drag in La Grande, Ore., a small, rural town, for over two decades. And while they were making do in the space, their client numbers were beginning to increase and the tiny space was feeling more and more cramped.

“We’d get frazzled if two people walked in at once,” Delaney explained. “This is fantastic to have all of these clients, but we have no space.”

The pastor of Delaney’s church knew that Next Step was in need of a more accommodating location, and told her that he had heard of a non-profit with a house they needed to either sell or give away. Still not convinced that a free building was possible, Delaney initially blew it off.

But then a couple of months later, when their small building was feeling even smaller than usual, Delaney remembered the potentially free building her pastor had told her about. She decided to call up a board member from the non-profit and put Next Step’s name in the hat.

Within a week, Delaney was touring the building.

“They wanted to go with someone who would use it and not sell it, and someone who would do good with it,” Delaney said. “They wanted it to continue with children, having something to do with kids and helping the community. We’re really pushing the parenting education thing and our community has really responded to supporting that.

“Within 10 days they called and said they wanted to gift this building to us. It’s a really cool story and it’s definitely a God story because we’re still pinching ourselves and going, ‘Did this really happen?’ In the beginning of January, I would have said that we were going to stay where we were. Within two we weeks, we started pursuing this place, and by the end of January, it was all in motion.”

Next Step began operating at their new location at the beginning of May. While the location did not strike Delaney as ideal at first, at 4,530 square feet the new digs are turning out to be the most suitable place for Next Step.

“I was thinking the best place would be the main drag, but it’s not,” Delaney said. “This is kind of nestled between the college and hospital and there’s lower income housing. It’s walking distance from the college so it’s actually a really great location. You could just be walking around and end up at our office, and no one would know you’re there. It’s in what’s considered the medical district and we can serve people here.”

Next Step is now able to serve more than one or two clients at a time with pregnancy tests, counseling, educational programs, and baby gear, and is planning to add abortion recovery support to their list of services as well. This way, Delaney explained, even if a client chooses abortion, they know that they always have a safe space at Next Step.

“It’s been a lot of work. It’s been orchestrated very divinely because it’s not anything I’m doing,” Delaney said. “I’m just riding a wave. God has definitely blessed us. We’re trying to stay true to what we’re about and be very open about what we do and what we won’t do.

“It’s been really cool – this testimony of faith and prayer and answer, and God giving good gifts to those who are faithful to him and want to do the right thing.”

Editor’s Note: Next Step is just one of many Pregnancy Help Organizations moving into spaces gifted to them. Is your location the result of a gift? Contact Pregnancy Help News with your story as we seek to delve deeper into this growing trend.