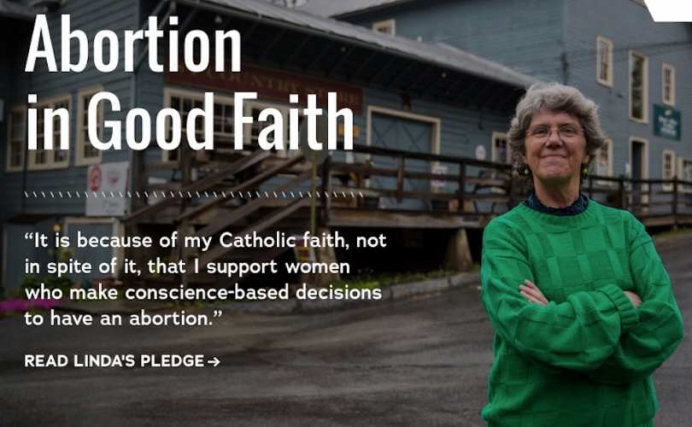 Pregnancy Help Leader: "It is neither Catholic nor moral to advocate abortion."

Responding to a full-page ad purchased by Catholics for Choice in newspapers across the country Tuesday, a pregnancy help organization executive director in Chicago pushed back with a brief, but powerful letter published in the Chicago Sun-Times.

Susan Barrett, executive director for Aid for Women, which operates in four locations throughout the Chicago area, underscored the ironic timing in the Catholic church’s recent canonization of Mother Teresa—a vociferous opponent of abortion and a renowned champion of the sanctity of life—and the Catholics for Choice’s “In Good Faith” campaign.

The ads argue that Catholics are conscience-bound to support abortion on-demand not in spite of their faith, but because of it, which is direct contraction to the church’s official stance.

“The recently canonized Saint Mother Teresa of Calcutta said that any country that accepts abortion is not teaching its people to love, but to use violence to get what they want,” Barrett wrote. “She firmly proclaimed that the greatest destroyer of world peace is abortion.”

“Abortion is not social justice but violence toward the weakest and most vulnerable members of our society, and Catholics for Choice wants to use our tax dollars to pay for it.”

Established in 1973 as an abortion advocacy group, Catholics for Choice is currently leveraging its $3 million annual budget to back the repeal of the Hyde Amendment, which prohibits public taxpayer dollars from directly funding abortions in the U.S.

Catholics for Choice has long been a darling of Planned Parenthood and the Democratic party, which has campaigned heavily on its 2016 platform position opposing both the Hyde and Helms Amendments, the latter of which prohibits taxpayer funding of abortion internationally.

Pro-life and Catholic leaders across the country have spoken out in opposition to Catholics for Choice’s current campaign to seize taxpayer funds for the abortion industry.

Tweet This: "It is neither Catholic nor moral to advocate #abortion." #prolife

Barrett’s organization is one of the named plaintiffs in a complaint brought by Alliance Defending Freedom (ADF), challenging a change in Illinois’ Healthcare Right of Conscience Act that will require all healthcare providers—including but not limited to those working in pregnancy help centers—to refer clients to abortion providers in spite of deeply held religious convictions.

The change in Illinois’ law, which was signed by Republican Gov. Bruce Rauner July 29, requires healthcare providers in the state to not only maintain and distribute a list of nearby abortion providers, but to counsel women on the so-called “benefits” of abortion. Along with violating free speech and free expression of religion guaranteed by the First Amendment, the law runs directly counter to tenets included in the "Commitment of Care and Competence," an ethical code of practice adopted by pregnancy centers and pregnancy medical clinics who are affiliated with national groups such as Heartbeat International, Care-Net and NIFLA.

Barrett wrote she was “shocked and saddened” to see the ad promoting the specter of publically funded abortions from a purportedly Catholic viewpoint, particularly since pregnancy help organizations like Aid for Women works entirely without state funding.

“Aid for Women works with thousands of pregnant women each year, and we see firsthand that women are feeling alone and are victims of their circumstances—that is the real injustice,” Barrett wrote. “True justice is giving women the emotional and material resources they need to carry a child to term, and either parent or make an adoption plan. It is neither Catholic nor moral to advocate abortion.”