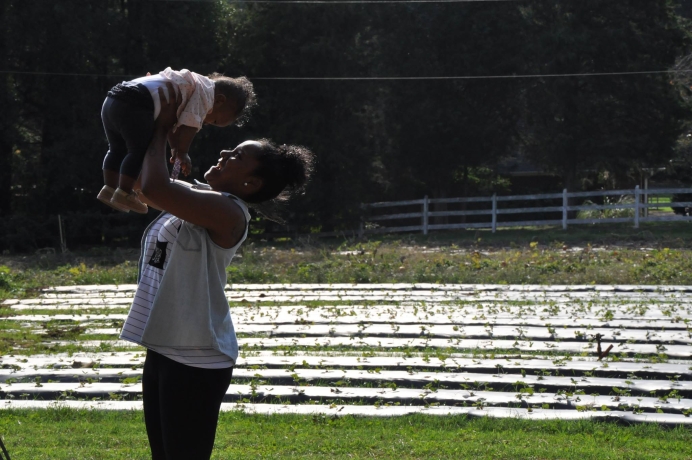 Not planned, and not rejected: How pro-life pregnancy centers care for mothers and their babies

Providers continue helping expectant women and families long after their babies are born.

(NCR) The crisis Tamiea Harris faced last fall wasn’t only about her unplanned pregnancy. The 25-year-old who lives in Minneapolis was also dealing with eviction, doubts about support from the baby’s father, and blood clots, for which she needed medical treatment.

While looking online for abortion information, Harris reached Nancy Kiolbasa, who, rather than guiding her toward an abortion, helped her to see that her baby wasn’t the problem and that she didn’t have to face her problems alone.

“You don’t really see that a lot from abortion clinics or people in general,” said Harris, referring to the material and emotional support Kiolbasa and her ministry, Marriage Material, have given her and her two sons before and after her daughter’s birth in June.

“They’re not that kind and nice anymore or they’re using you,” Harris said of others she has encountered. “Nancy wasn’t like that. She was treating me like a friend. She was concerned, worried about me and the boys.”

While an unplanned pregnancy was more often a crisis in itself in past decades, for many women, it’s now one part of a larger crisis that can include domestic violence, housing insecurity and other problems, according to several pregnancy-resource providers. These centers continue helping expectant women and families long after their babies are born.

Harris and other parents who have received help from pregnancy-care providers talked about how those providers were there during their past crises and continue to offer assistance. And the providers are committed to ongoing aid.

“If you’re going to ask someone not to get an abortion, justice requires you to then to walk alongside them and help them,” said Kiolbasa, founder and director of the Stillwater, Minnesota-based Marriage Material, which intercepts women online who are seeking the abortion pill and helps them choose life for by offering them truth and assistance. The ministry has helped 150 women get off the abortion pathway during the past eight years, she said.

Pregnancy-resource centers helping mothers and families have especially been under attack this spring and summer, after the May 2 leak of a U.S. Supreme Court draft decision in the Dobbs v. Jackson Women’s Health Organization case, followed by the high court’s final ruling released June 24, which overturned the 1973 Roe v. Wade decision that previously granted a constitutional right to an abortion.

In the United States there are more than 5,300 federally funded women’s health clinics providing comprehensive care and advertising women’s health services, as well as more than 2,700 pregnancy centers, compared to 585 Planned Parenthood locations, according to July data from the Charlotte Lozier Institute, which supports the cause of life through medicine, science and research.

While many states grapple with their own abortion laws and some also scrutinize pregnancy-resource centers, around the country some centers have been victims of vandalism, theft and destruction by pro-abortion activists.

“I think they’re casting a wide net on pregnancy-resource centers and making assumptions about what we do and say,” said Debbie Capen, executive director of MiraVia.

Founded in 1994, MiraVia operates both a residence for expectant and new mothers on the campus of Belmont Abbey College in Belmont, North Carolina, and an outreach center where women can receive professional assistance and material donations in nearby Charlotte. MiraVia hasn’t seen attacks to its center or residence but is working on security with police, Capen said. MiraVia plans to open a larger outreach center in Charlotte in September, Capen added.

Since the Dobbs draft leak, Emmanuel House International (EHI) in Carmel, New York, has seen damage to its doors and exterior sign, and several bank accounts were hacked, making security upgrades necessary, said Rita O’Brien, executive director of the center, which has provided material and emotional support to women and families for nine years.

As the country considers the post-Roe reality, pregnancy-resource providers continue to work with government agencies and other organizations to help expectant mothers deal with sometimes complex problems, O’Brien said.

“What makes an unplanned pregnancy a crisis is what’s happening around it, as well,” she said.  “So if there’s domestic violence or if there’s substance abuse or unemployment, human trafficking, rapes, etc., those are the inconvenient truths or the dark side that nobody on the other side wants to talk about.”

Women are more likely to be in crisis and seek abortion if they don’t have the support of the baby’s father, said Kiolbasa, who estimated that only about 20% of fathers are supportive of the pregnancy.

“The fact that [MiraVia outreach center] serves clients for a year, not just one bag of baby goods and ‘Good luck’ and send them out the door,” she said, “we’re walking alongside them.”

Many EHI clients also need more help because of their complicated situations, O’Brien said. “Where in the past maybe they would come during their pregnancy and maybe for the first year or so, now we’re seeing that they come for the pregnancy, and they end up staying.”

Olivia Agins, 37, is one of those EHI clients. Six years ago, she needed diapers and other items for her newborn son because her husband was finishing school and their income was limited. An employee at the federal WIC program (Special Supplemental Nutrition Program for Women, Infants, and Children) referred her to EHI.

Two years later, the couple learned they were pregnant with triplets. Doctors brought up abortion several times, citing the pregnancy’s risks and later the discovery that one baby had a club foot. Devastated at the idea of abortion but lacking financial and family support, Agins returned to EHI. She talked with other moms who had had multiple births and received more baby items for her growing family.

The triplets are now 4 years old, and the family still stays in touch with EHI.

“You start there, when you have an infant, when you’re pregnant, and you’re getting the support,” Agins said. “It was so nice to always have [that] in the back of my mind. Sometimes you need stuff, and it’s always nice to know Rita’s there.”

Women come to EHI because they want to have their babies, emphasized O’Brien. “They’re trying to find out a way to make [the birth] happen.” And EHI makes sure the support is in place.

Last September, when Yessika Barrera’s daughter was 3 weeks old, someone she knew recommended she go to MiraVia outreach center. As first-time parents lacking resources, Barrera, 22, and her husband received a crib, baby clothes and diapers from the outreach center. “They say whatever you need they will try to get it; for each person, they more or less look for what they need,” she said.

Barrera, who is originally from Honduras and now lives in Charlotte, also learned about parenting in the outreach center’s life-skills classes. “I was a new mother, and I didn’t know many things,” she said. “They explained what happens with babies.”

Few other organizations in the Charlotte area provide diapers, cribs, car seats and strollers, Capen said. “We give out tens of thousands of diapers every year.”

Tweet This: In the U.S. there are more than 2,700 pregnancy centers, compared to 585 Planned Parenthood locations.

Diapers were only one of the items Timothy Corkery and his then-girlfriend received from O’Brien 16 years ago when they were facing an unplanned pregnancy as high-school students — and they remain ever grateful. O’Brien was directing a different pregnancy-resource center at the time.

“Rita was very welcoming and very understanding of my situation, and she gave us all the help she could offer, whether it was diapers, wipes, little tricks to do with the baby, all kinds of good stuff, gift cards people donate — just to help us get by as young parents,” said Corkery, 33, who now lives in New Milford, Connecticut. “Oh yeah, and how to finish school and juggle a kid at the same time. She helped me with my first job.”

Corkery’s wife is now expecting the seventh child in their blended family, and he still visits EHI. When he sees other dads there, he talks to them. “Probably if I didn’t reach out to Rita when I did when I was younger, I wouldn’t be in the positive position I am now,” he said. “God only knows where I’d be, trying to figure out how to be a dad and all that stuff.”

Relationships with expectant mothers don’t end when their babies are born, Kiolbasa emphasized. “You’re still part of their lives, supporting them,” she said. “Hooray for her! She got off the abortion pathway, and I’m not going to abandon her.”

Kiolbasa added, “It’s something to feel like you’re not alone in this walk, that there’s somebody else out there who cares.”

Editor's note: This article was published by the National Catholic Register and is reprinted with permission - www.ncregister.com.