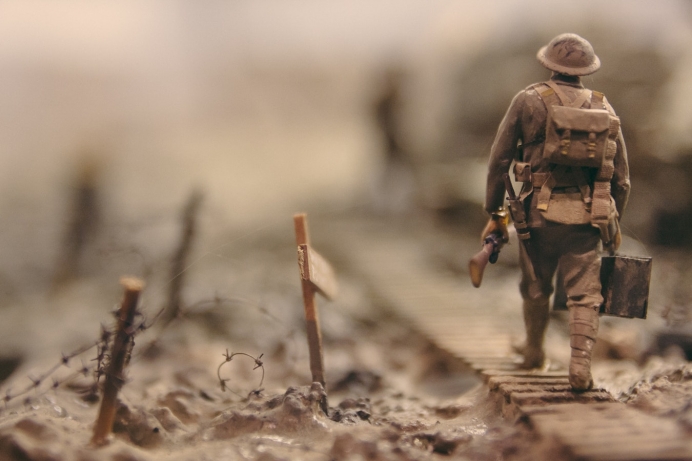 The heartbreaking irony of the first few days of June 1944 versus June 2019:

Members of the United States Military participated in the largest coordinated Allied invasion via air and sea ever recorded and still unmatched in our history to date. After Pearl Harbor was bombed young men—my own son’s age—rushed to enlist in the Service to defend the Republic of the United States; the very lives of strangers across the sea; people they did not know, people they would probably never meet, but they were willing to place their own plans aside and literally place their very lives in the hands of whatever may face them on the battlefield for freedom.

That freedom that has its foundations in the knowledge that we are all created equal and are endowed by our Creator with the unalienable rights of life, liberty and the pursuit of happiness. These men—and boys—prepared for months and were finally dropped from the sky and surf to defend Western Civilization. The heroes never made it off those beaches; yet, they all ventured to foreign lands, to a foreign people and attempted to understand a foreign language. But the principle was universal. Defend the defenseless at all costs.

That Civilization took a hit yesterday in the North Carolina State Legislature. A few weeks ago, Governor Roy Cooper vetoed the Born Alive Abortion Survivor’s Act. Yesterday, at 3pm, the House of Representatives had the arduous task of overriding that veto with 3/5 of the vote. It failed. Babies born alive after a failed abortion—after that mother’s right to choose has been chosen, after that baby is a living, breathing, tiny and defenseless child outside her mother’s womb—will be legally left alone to die in NC. Because of what crime? The crime of being unwanted.

Just 75 short years ago—the span of one lifetime—our brave men from NC rushed at the opportunity to defend the defenseless.

Yesterday, men and women from NC rushed at the opportunity to snuff out tiny defenseless lives that somehow survived. God, help us.

My, how our men have changed. As I looked across the Gallery, I saw males in pink pigtails and tutus, males who refused to even say the Pledge of Allegiance, wearing pink shirts that proudly support death through abortion. It was altogether infuriating and heartbreaking.

Two abortion survivors, Gianna Jessen and Claire Culwell, met with State Legislators and attended the vote as guests in the Gallery. Miraculously, these two women survived after having been aborted. They have physically and emotionally survived abortions. They lead productive lives. Their lives matter. The pink t-shirt wearing men and women were so full of blindness or rebellion that they could not even bring themselves to applaud these women who were just steps away from them, in the same room, breathing the same tense air, watching the same battle play out in front of our very eyes. Gianna and Clare received a standing ovation and these deceived and yes, rude, people could not seem to accord them with the basic human dignity each person deserves—even when you’re wearing a pink tutu in the halls of your state’s government. I watched their jeers and could only imagine their comments. All they could seem to focus on was “women’s reproductive rights”. Their hearts are so hardened toward "rights" that they literally can not see the baby right in front of them.

This, Representative Butler, is indeed pro-abortion. Embrace the moniker; for that is the reality of the Democratic Party's platform.

Tweet This: This, Representative Butler, is indeed pro-abortion. Embrace the moniker; for that is the reality of the Democratic Party's platform.

Is this who we as North Carolinians have become? Is this what our heroes from D-Day and the Greatest Generation gave their lives for? So we could literally stand mute as innocent and defenseless babies are left alone to die in cold, sterile environments without the first caring and loving human touch? To allow the only human interaction this child will receive to be one of steely reserve precipitated by monetary profit? God, help us indeed.

I’m just sad. And I don’t do sad. It’s not a totally foreign concept to me, but I’m usually able to bounce back quickly from sadness. I just can’t seem to shake this sadness quite as easily as before. Maybe it’s because we know these babies since we "meet" them in our pregnancy centers.

Most people won’t be in a situation to have seen a baby on an ultrasound very shortly before his little life is ended through abortion. And yes, the opposite is also true. Those babies that we see on ultrasound just minutes after their abortion was scheduled do hold a tender corner of your heart. Maybe it’s because when I got home yesterday, my three-year-old little boy Eli came running up to me and gave me the biggest hug and sweetly said, “Mommy! You’re home!” Said and done numerous times. But not said and done on a day when I felt like a failure. Failed his generation. Failed my home state. Failed those children. And I didn’t even really do anything except show up to a few meetings and hearings and make a few phone calls and send a few emails.

But, you see, those children left to die through infanticide have so many things in common with my Eli. His birth mother went to the abortion clinic to abort him three separate times. At that point in her life, she was just an absolute mess. But she still had value as did her baby. She was selling herself for drugs. Her baby would probably be born addicted—and he was. She had excluded the people who really loved her and made herself alone in that dark place.

What if she had aborted Eli? What if he survived? For all of you who know our Eli, you will easily say he is definitely a fighter. A stubbornness exists in him—that innate desire to fight for life pulsates through his body. He was born at possibly 30 weeks and weighing only two pounds and addicted to numerous illicit drugs. He would have been exactly the "type" of baby left to die alone after a failed abortion: addicted mom, alone, no one to ask any questions because his life is of less value to those who do not ascribe to the inherent value of each and every child created. So, it’s personal. And this is why I will continue the fight to defend the defenseless. Even when I’m sad. Even when I feel like I’ve failed.

This has taken me all day to write—which is unusual; but just a few short minutes ago, I understood exactly why. I literally told my co-workers, “I’m going upstairs to pout. Come get me if you need me, but I just want to be alone with Jesus for a long while and ask Him lots of questions.” I left them to do all the work of meeting women right where they are, and they did. In a BIG way:

A smart, pretty, young blonde that we will call “Nicole” came in today and informed us she has her abortion scheduled for this weekend. This is not that uncommon. Her justifications for abortion are common and she has support for both abortion and parenting. We offered her an ultrasound and she accepted. Nurse Candice expertly explained that we were looking at a tiny ten-week-old baby and reviewed all her baby’s features while weaving in pertinent questions. Very soon Nicole shifted the conversation to God and her questions about Him and how He is involved in this pregnancy and her decision. Nurse Amanda listened and asked the Lord to guide her words and conversation with Nicole.

Nicole shared that although she was raised in a Christian home and knew abortion was wrong, she was not a believer herself and she feels abortion is her way out of this situation since the reality of a single pregnancy is sometimes very difficult to bear even for the strongest of us. Amanda resolutely and lovingly shared God’s truth with Nicole in such a way that Nicole began to look at her pregnancy a little differently. And then it was as if the scales literally began to fall away from her eyes and Nicole began to ask question after question about Christ. When Nicole walked out of our door, she left as a heart turned back to her Father and a new believer in Jesus Christ! Now, we will continue to pray that she continues her motherhood and cancels that abortion appointment!

Nicole will never forget the love that Candice and Amanda showed her today—it was a love that drew her to Christ—and it all started with an unplanned pregnancy.

I think my sadness is almost gone and now I’m just going to listen to my Mama’s advice: “Dry your tears and get up and do something for someone else.” My prayer is that you will ‘do something’ along with me and make the heroes of D-Day proud that we determined to lay down our lives to defend the defenseless just like they did. This is what we, as North Carolinians, have become. We will not quit. We will persevere. We will continue the fight personally, legislatively, relationally and through the Church until abortion is unthinkable. Who’s with me? #bringit

Editors Note: This was originally published on Hand of Hope's Facebook page June 6, 2019.

Founder & CEO at A Hand of Hope Pregnancy Resource Center in Raleigh, NC 27606