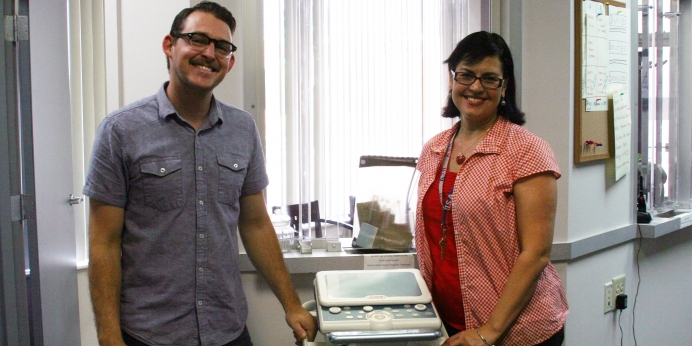 The rich keep getting richer on the South Side of Columbus, Ohio.

Situated squarely in the middle of one of the poorest neighborhoods of the capitol city, Stowe Mission of Central Ohio represents a singularly rich example of gospel-centered love and collaborative support—a striking depiction of the phrase, “better together.”

The building itself teems with activities that range everywhere from a food pantry managed by the Salvation Army that served 164,000 meals in 2014, thanks to the involvement of 97 area churches and organizations, to a healthcare ministry that reached 1,074 patients with free dental, vision, mobile medical and breathing association services in 2014.

Ask the staff what goes on in the multipurpose room, and they’ll tell you it may be the truest “multipurpose room” on the planet. On a given weekday, a visitor to the room could find any of the following activities: urgent care with an on-site mobile unit from Mt. Carmel—a local Catholic hospital—K-12 tutoring from volunteers as old as 90, a weekly meeting of a congregation primarily made up of registered sex offenders, HIV testing courtesy of nearby Nationwide Children’s Hospital, a free legal counsel clinic, and healthcare navigators there to help community members get access to insurance.

That’s just what goes on in one room during the week at Stowe Mission (job training, homeless advocacy and more tend to happen in other rooms). And it’s not to mention Sunday mornings and afternoons, when congregations of English-speakers and Laotians use the space for their gathering times.

Yet, the rich is set to get richer this fall. That’s when Stowe Mission hopes to begin serving its clients with its new ultrasound-ready pregnancy help medical clinic—one floor above the contender for the most aptly named multipurpose room in the world.

Though adding life-affirming pregnancy help to the existing repertoire had been on the heart of Stowe Mission’s President and CEO, Michael Brooks since shortly after he took the reigns of the organization in 2004, it took the unexpected gift of an ultrasound machine in the summer of 2015 to put the wheels into motion.

With the Southern Baptist Convention’s (SBC) Annual Meeting in Columbus, Stowe Mission was selected by the SBC’s Ethics and Religious Liberties Commission to receive the ultrasound machine as part of its “Psalm 139 Project.”

While Brooks jumped at the chance to add the pregnancy medical clinic to Stowe Mission’s services, what he didn’t realize until after the fact was that he was already working day-to-day at that point with the perfect candidate for the position.

From Crossover to Clinic Director

A 15,000 square foot facility, Stowe Mission is the dual headquarters of the organization itself, as well as the Metro Columbus Baptist Association, a regional entity of the Southern Baptist Convention.

In the lead up to the 2015 SBC Annual Meeting, the Metro Columbus Baptist Association was charged with organizing a convention-wide evangelistic outreach called “Crossover Columbus.” That opportunity put Cindy Irizarry in the office five days a week, starting late September of 2014, in preparation for this summer’s Annual Meeting in mid-June.

Irizarry and her husband, Arnaldo, had planned to leave Columbus following the Annual Meeting, but by April, both were convinced that God was leading them to stay in Columbus. Stowe Mission’s Associate Director, Austin Hill, had been joking for months that Irizarry was there to stay, and she suddenly become a prime candidate to serve as executive director when the Ethics and Religious Liberties Commission announced the ultrasound machine was headed to Stowe.

“We came to Columbus with one thought in mind, and that was to serve the Columbus Metro Baptist Association with Crossover Columbus,” Irizarry said. “So to see God use the Ethics and Religious Liberties Commission to bestow Stowe with an ultrasound machine is amazing—there are so many clinics and pregnancy centers that are trying to transition to become medical. They’re waiting and they’re hoping for funds for ultrasound. And here the Lord gives us His ultrasound machine.”

Irizarry’s first foray into pregnancy help came in 2000, when she started volunteering at First Choice Pregnancy Center in South Miami. She and Arnaldo would later serve as part of a board that formed Heartbeat of Miami, which opened its doors in 2007 in the highly Latino area of Hialeah that had no life-affirming presence to counter four abortion facilities in a four-block radius.

One of those abortion facilities had once belonged by the mother of Jeanne Pernia, whose journey has led her to become Heartbeat of Miami’s Client Services Director—in the very same building her mother used to own, no less. In those early days, Irizarry and Pernia met one-on-one to process each of their previous abortions and experience the power of forgiveness together.

Now reaching women in three locations, Heartbeat of Miami became the first pregnancy center to earn WORLD Magazine’s regional Hope Award for Effective Compassion in July, and is in the running to take home $25,000 for the national award, with voting ending Sept. 14.

Following her time as a board member at Heartbeat of Miami, Irizarry and her husband relocated to Baltimore, Md., where she continued to be involved in pregnancy help, including as Director of Development for Center for Pregnancy Concern.

Tabbed to become the director at Stowe Mission’s pregnancy medical clinic, Irizarry looks back with an added sense of appreciation at the time she spent in the early days of pregnancy help in Miami, along with a team that included Pernia, then-Heartbeat International Director of Development Rev. John Ensor, and Martha Avila—who still serves as executive director at Heartbeat of Miami.

The first batch of calls Irizarry put in were to Rev. Ensor, Pernia and Avila—the latter two she refers to as “sisters in arms.”

“I learned how to open a pregnancy medical clinic from John Ensor, and I had a conversation with him after I accepted this job, to let him know—and to let him know he’s still my mentor,” Irizarry said. “Knowing the successes that my sisters are having at Heartbeat of Miami, I rejoice when I see what God is doing through them and with them, and expanding the vision that God had given us back then.

“It helps me to look back and say, ‘If God was able to do that in Miami, yes, He’s going to be able to do it in Columbus.’”

Better Together: Collaborating for the Sake of the Gospel

Irizarry and Hill—whose mother served as executive director at nearby Pregnancy Care Center of Union County—hope to start seeing clients in the fall, but are in the process of waiting for building permits to clear through the city.

In the meantime, they are busy laying the groundwork for what Stowe Mission has done best over its 40-plus year history: connecting community assets to areas of need. It’s a philosophy of inner-city ministry—what Hill explains as a better understanding of poverty—that has driven Brooks and Hill to draw on the expertise of the surrounding community to help every person who enters Stowe Mission to walk out with the tools they need to navigate their lives better.

A case in point is the job training corps, which has a success rate of 80 percent, measuring the amount of participants who go on to enroll in community college or get a job. On the volunteer end, the collaborative atmosphere at Stowe Mission was on display over the winter, when the dental clinic flooded while all six of its chairs were filled with clients, but the dentists offering their time never missed a beat—soggy soled and all.

Joining an organization that already offers help through so many different avenues, Stowe Mission’s pregnancy medical clinic is in a perfect position to deliver practical assistance and life-changing hope.

“I saw the Lord using all of that to prepare me to come to different cities. Being partnered up with the people at Stowe—they believe that to do better, to serve others better, we partner with others who are like-minded,” Irizarry said. “We are not an island, trying to do everything on our own. We are working with others together for the sake of the Gospel.

“When we serve the kingdom of God, it’s all about Jesus Christ. It’s about furthering His name, His mission. It’s about reaching the world for Christ.