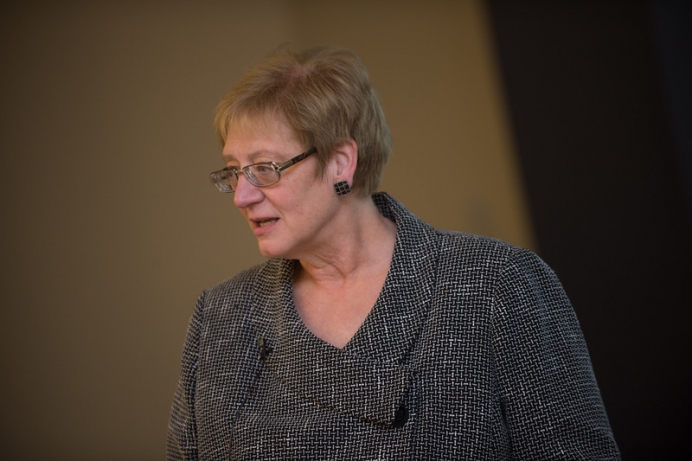 But the keynote speaker for a nursing research conference at Indiana State University said too many mothers still lack adequate prenatal care and some lack the most basic tools for healthy living.

Thelma Patrick, associate professor of nursing at The Ohio State University, studies the long-term consequences of high-risk complications during pregnancy and behavioral interventions aimed at improving outcomes for mother and child.

The most effective interventions are "those that work directly with the women during their pregnancies," Patrick said, citing the success of "active pregnancy centers" where nurse practitioners work with groups of women and the women work with one another.

"It helps them learn what they need to learn and then they are more comfortable asking someone in the community (for help and advice)," she said.

While at the University of Pittsburgh School of Medicine prior to joining Ohio State's School of Nursing, Patrick was part of a group called "Moms to Be."

"We taught about cooking for the families with the highest nutritional value and lowest cost, yet many didn't have the things that they needed," she said. "Each week when they came, their rewards were a knife to cut their salads or a colander to drain their macaroni. I remember taking one of the women home and found the woman didn't have a stove or microwave, but a hotplate."

Finding ways to help more mothers have successful pregnancies is an issue in Indiana, where infant mortality rates exceed the national average, especially in the Wabash Valley, where the rate in many counties exceeds the state rate.

The most effective work is done people-to-people, helping pregnant women understand how important it is to take care of themselves because of the effect their health has on their baby, Patrick said.

"Then it's really important that we look at how we deliver care," she said, noting that many low-income mothers do not have a private doctor, have a different caregiver every time they go for pre-natal care and may have never seen the person who delivers their baby before they enter the delivery room.

"Those are things that most of us wouldn't tolerate, but we expect that those are things that are appropriate, for some reason," she said. " We need to change those structures so that people can feel as though they can ask a health care provider known to them questions that they have. We need then to pay closer attention not only to the high risk (infants) in a neonatal intensive care unit but to how we parent and raise those children so that they grow up to be adults and not have a lot of the difficulties that they can have."

Patrick said the nation's health care system is far from meeting the true spirit of the Patient Protection and Affordable Care act when it comes to health promotion and disease prevention strategies, but pregnancy centers can go a long way.

She addressed more than 100 undergraduate nursing students and was pleased to see a majority of the students raise their hands when she asked how many planned to continue their education beyond a bachelor's degree.

"It is really important that, as nurses, we have researchers to look at the interventions that we do so that we know we're doing the best we can do for the patients," she said. "Second of all, not everyone is meant to be a researcher. You have to have certain characteristics and a lot of education to get there and there is nothing that shortchanges the clinical area."

Jack Turman, dean of Indiana State's College of Nursing, Health, and Human Services, has a long history of collaborating with communities to improve birth and infant development outcomes for at-risk families.

"We are so lucky to have Dr. Patrick address our nursing students and faculty at the annual Sigma Theta Tau event," Turman said. "She is a national leader in advancing maternal-child health and I am fortunate to have the chance to work with her on many exciting projects."

Patrick has a Ph.D. in nursing, but said the relatively new Doctor of Nursing Practice degree, which is available at Indiana State, "is certainly a positive avenue. There, people learn to use research effectively and that's just as much part of the equation as developing it. Right now, it takes about 17 years from the time an intervention is discovered until it gets into practice and that's unacceptable. We need to do a better job."