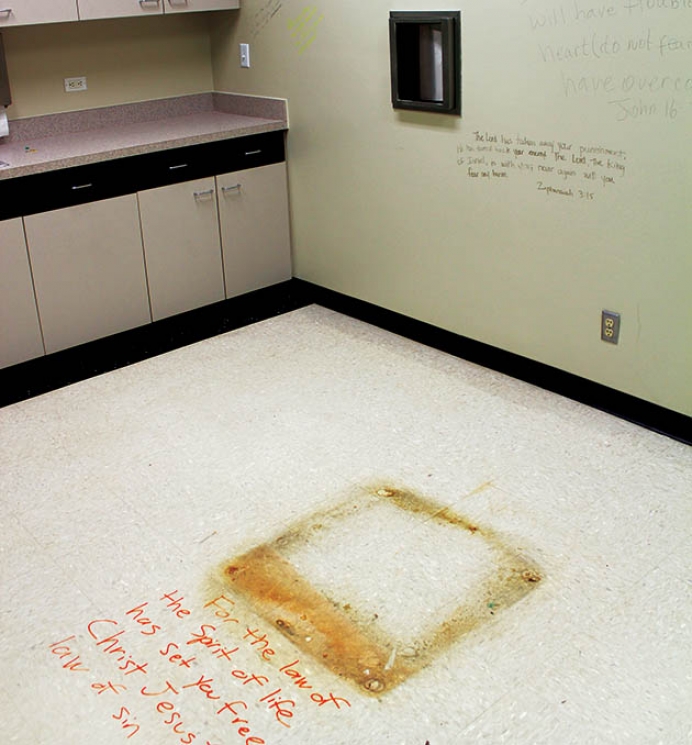 Former abortion procedure room where pro-life advocates have inscribed the walls and floor with Scripture. The floor stain marks the location of the surgical table and the steel carousel in the wall transferred the aborted fetus to the biohazard waste.

BRYAN-COLLEGE STATION—Although vacant for more than 18 months, the building at 4112 E. 29th Street in Bryan still bares the mark of its former occupants. In one room the port for a suction hose protrudes from a wall. Built into the opposite wall is a carousel—its cold, stainless steel housing transferred the convenient disappearance of the “product of conception” to a biohazard waste container in the adjoining room. And, in the middle of the linoleum flooring, a brownish, square stain—like a crime scene chalk outline—gives evidence of the recently removed surgical table where countless women succumbed to the abortionists work.

And yet hope abounds. In what used to be the abortion procedure room of the Planned Parenthood Bryan Health Center, passages of Scripture now fill the walls and floor. Words of life flow from that room, down hallways, into room after room, all penned by a band of believers who spent 15 years prayerfully and peacefully seeking an end to abortion in the Brazos Valley.

On August 1, 2013, God granted their petition, and the Planned Parenthood clinic closed its doors.

Within days pro-life advocates laid out their fleece once again.

Tweet This: @Hope_Preg_BCSTX using a former Planned Parenthood clinic as a pro-life beachhead.

“It had always been a prayer that God would give us this building,” said Tracy Frank, executive director of Hope Pregnancy Centers of Brazos Valley (HPC), a pro-life medical resource center serving College Station.

“We didn’t spike the football. I didn’t want to ruin it for any other pregnancy center to do this,” Frank said. Instead she talked about redemption. What was once a place of death and grief would be transformed into a source of life.

The room where abortions were performed will soon reverberate with the gospel message as the intake room for HPC’s new ministry—a clinic for the free testing and treatment of sexually transmitted diseases (STDs). As client information is collected, volunteers will share the gospel and God’s plan for human sexuality.

HPC has operated quietly and effectively for 30 years in College Station, home to the 59,000-student Texas A&M University and nearby Blinn College, providing pro-life care and pregnancy support to abortion-minded and low-income women and families.

More vocal and publicly engaging pro-life ministries sprang up to counter the influence of the newly established Planned Parenthood clinic in 1998. The Coalition for Life opened an office just a few doors down from the abortion clinic. From that ministry the 40 Days for Life campaign, which has grown to an international campaign of intercessory prayer and counseling in front of abortion clinics, was conceived during prayer around a table that now sits in what was the abortion provider’s conference room.

Seated at the table on an overcast day in March was the 40 Days for Life board of directors. Two years earlier they would have been arrested for trespassing just for walking up the clinic’s driveway much less entering the front door.

HPC quietly supported the ministry’s work but avoided the spotlight. Despite the prayerful, non-confrontational tactics required of all 40 Days for Life volunteers, pro-life advocates cannot shed the harsh characterizations foisted upon them by pro-abortion advocates.

Frank said, “We didn’t want to give potential clients the perception that we were single-minded and judgmental.”

But a partnership was established. Women counseled outside the abortion clinic were sent to HPC or one of the other local non-profit organizations providing pro-life services to abortion-minded women.

When the abortion clinic shuttered Frank was not oblivious of the fact that she and the Bryan-College Station pro-life community were presented with an opportunity to “stick it” to Planned Parenthood.

Instead, redeeming the use of the building for the ministry of the gospel will serve a greater purpose.

Research indicating 15-24- year-olds are most frequently diagnosed with STDs and are the least likely to seek treatment convinced Frank and the HPC donors that they had found their new ministry. Helping young adults in crisis—be it for an unplanned pregnancy or a distressing STD diagnosis—will allow HPC to meet needs while sharing the gospel and God’s plan for sexual purity. The STD clinic Testing 4 You, or T4U, will allow HPC to extend its gospel-infused ministry without having to relocate its well-established pregnancy center at 205 Brentwood in College Station.

Fundraising for the purchase was kept low-key and is still ongoing. Planned Parenthood knew HPC was the potential buyer, but Frank feared a public campaign to fund the purchase would have aroused protests from pro-choice advocates who could sway the abortion provider to reconsider.

Donations, a bank loan and no-interest loans from two local supporters funded the purchase but have left the HPC ministry in debt. In order to offset operating the 6,000-square foot facility, all tenants, including T4U, will pay rent to HPC. Other tenants will include HPC supporters and pro-life husband and wife doctors, Haywood Robinson and Noreen Johnson.

Another tenant, Stuart Quartemont, a College Station physician known for his medical missions work, will process the STD tests as part of his medical lab business. HPC officials anticipate opening the clinic in early April.

The first time Frank walked through the building it was with the real estate broker. The experience was surreal. Stuffing any emotional reaction down deep, Frank let her administrative side take control. But then she attended an event for donors and those who prayed for the clinics’ closure. They roamed the halls of the building praying and writing Scripture verses upon the walls and floors.

Remodeling work continues at 4112 E. 29th St., changing the appearance enough to blur the memory of any client who came here for an abortion. The walls will be painted and the floors resurfaced. But underneath it all will remain the power of God’s word offering healing and hope.

This article originally appeared April 6, 2015 at TexanOnline.net. Republished with permission.