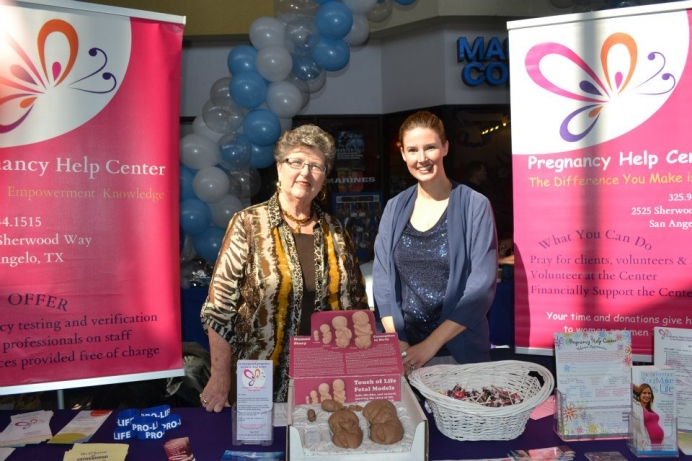 In an announcement by Board Chair, Mike Boyd of the San Angelo Health Foundation, $1,177,585 in grants will be awarded to various local non-profit organizations. Among those chosen to receive a grant was the Pregnancy Help Center of Concho Valley, Texas, which has been providing care and assistance for women facing unplanned pregnancies since 1991.

The $35,000 grant will be a great boon to the steadily growing non-profit organization. What began as a small operation, consisting mainly of volunteers from local churches, now runs out of a building of its own, and employs a gynecologist, five staff nurses, as well as 45 unpaid volunteers and social workers.

Every month, the Help Center provides 180-250 pregnancy tests to expectant mothers, as well as sonograms to determine the viability and gestational age of the children.

With the area serving as home to Angelo State University and the U.S. Army base at Fort Hood, the Center’s clientele is made up of a mixture of young women in their first year of college and women serving in the military who do not wish for a pregnancy test to show up on their medical record.

Those attending are given “points” to earn necessities for their babies, such as diapers, strollers, and car seats, all of which are donated by local businesses and churches. The grant will go towards a much-needed renovation of the area in which the supplies are stored.

Besides holding classes, the Center’s vision is to support young women in a difficult situation in any way they can.

“We are a non-judgmental, safe haven for a woman who finds herself pregnant,” Executive Director Sandra Franke said. “We are pro-life, but we can’t make that choice for her. We can give information, but the woman has to decide. If she needs help after an abortion, we will still be there to help and not judge, or even to help her with her next pregnancy.

“We prefer that she would either choose to parent or to place, but she has to make her own decision. We don’t want to abandon her because she’s made a different choice.”

Tweet This: We don't want to abandon her because she's made a different choice.

The Pregnancy Help Center also provides counseling for women facing post-abortion depression. When asked about the future plans for the Center, Franke said, “We want to keep growing, helping more people, and working with more girls in crisis. We are on a really excellent path right now.”

Franke described one of the countless young women who pass through their doors weekly.

“This young woman was a typical over-achiever in high school,” Franke said. “She was a cheerleader and on the school government, but when she came to San Angelo for college, she went a little wild.

She came to the Center for a pregnancy test and was overwhelmed when it was positive. She had some friends who were encouraging her to get rid of the ‘problem’ by abortion. We spoke to her about making a choice she could live with.”

Tweet This: We spoke to her about making a choice she could live with.

She chose to keep the baby, continued in school, got a job in a restaurant, and came to our classes. She is graduating this year and her child is about three and a half.”

Such brilliant stories are not uncommon, as the Pregnancy Health Center has a 93 percent success rate of women choosing to parent or place their children instead of turning to abortion.

Franke, as well as her staff, board and community of supporters, are hoping the recent grant will lead to more clients served and more lives saved.